Germans greeted the arrival of the new year with their usual vigor, letting off hundreds of thousands of fireworks across the country in the early hours of 2007. For couples celebrating the arrival of new babies, there was another reason to be merry -- parents of children born after the turn of the year were eligible for generous new child support payments. 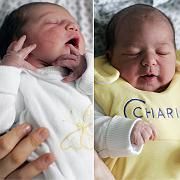 Spot the difference: The parents of Demian (r), born in the last hours of 2006, get the old benefits, while the lucky parents of Mizgin (l) qualify under the new system.

A new law, designed to encourage Germans to have children in a bid to boost the sagging German population, was born -- after a long and protracted gestation period -- on Jan. 1, 2007. For new parents whose babies arrive in the new year, it will mean a possible difference of tens of thousands of euros.

Instead of receiving up to €300 ($399) a month for two years, as was typically the case under the old system, a parent who takes time off from their career to look after a baby will now receive 67 percent of their last net income, up to a limit of €1800, for a maximum of 14 months. The new system benefits primarily the better off, however -- the unemployed and low earners actually did better under the old system.

As nature took her course around the turn of the year, there were winners and losers among the new parents, depending on whether their babies were born before or after midnight on Dec. 31.

Julia Gotschlich was one of the lucky ones. Her baby arrived at 1:03am in a Berlin hospital, meaning she will receive €938 a month from the state for a year. "We all hoped that the birth would happen in the new year," she told the German daily Bild. "And it worked out -- thank God!"

Another winner -- contrary to her expectations -- was Munich mom Nicola Harenberg. Her son was due to be born on Dec. 22, and so Nicola and her husband Kai had little hope of qualifying for the new payments. But little Ruben was clearly in no hurry, and was eventually born at 2:52 a.m. on Jan. 1, ten days after he was due. "Because it was totally unlikely that we would get the money, we hadn't really thought about how we would organize everything," Kai said.

Even those who lost out were sanguine and just glad that their babies were fit and well.

According to physician Bernd Köhler, the mother of the last baby born in 2006 at his clinic in Potsdam near Berlin would have preferred a 2007 birth. "But she laughed and didn't think it was so bad," Köhler said. "At the end of the day, her son is a beautiful boy."

"One mother was somewhat sad that her child arrived on New Year's Eve," reported Bern Cristensen, the head doctor of a clinic in Neuruppin in the German state of Brandenburg. The mother of little Emma, who was born at 8:10 p.m. on Dec. 31, had been hoping to qualify for the new child support payments.

She was something of an exception in the state, which has an unemployment rate of over 15 percent and where many parents would be better off under the old system due to their low incomes. "Where Caesarian sections were necessary, parents were often asking if we could please do it before the turn of the year," Cristensen said.

Munich high school teacher Johanna also lost out when her daughter Sarah decided to arrive in 2006 instead of in the second week of January, as had been expected. "Naturally we are happy that the birth went well and that Sarah is healthy," Johanna said. However both parents were disappointed that they would lose out on payments of around €1,400 per month as a result of the premature arrival. "We would really have liked to move into a bigger flat," Johanna said. "We'd already made concrete plans. Now the three of us will have to stay in a two-room flat. It's really annoying."

She added that worrying about the child support payments and the timing of the birth had overshadowed the pregnancy due to "psychological stress."

In the last few weeks of 2006, expectant mothers were reported to be looking into ways of bringing forward or delaying the birth, depending on whether they were better off under the old or the new system. Measures ranging from magnesium supplements to abstaining from sexual intercourse were touted as ways of delaying the birth. Gynecologists and midwives were insistent, however, that they would let nature take its course.

"We argue very strongly that you should not intervene unless the health of the mother or baby is in danger," Andrea Bolz, managing director of the German Association of Freelance Midwives, told SPIEGEL ONLINE. "None of us would interfere with a birth just because of some cut-off date."

Despite all the hype and expectations around the new law, most Germans remain unconvinced that the new payments will change anything. Barely a fifth of the population believe that the new law will lead to more births, according to a survey published Monday.