For Amin Sarif, Thursday was a real dèja vu experience. The 24-year-old Christian made his way through the streets of Beirut early in the morning, accompanied by his friends waving Lebanese flags. The streets were lined with policemen. "We were here on March 14, when Rafik Hariri was killed," the young student says. "Now we're once again mourning a politician -- another victim of Syria." Amin was one of hundreds of thousands of Lebanese citizens making their way to the main memorial service for young Christian politician Pierre Gemayel. Like practically everyone else, Amin is sure the anti-Syrian government minister was killed on the orders of Damascus.

When Amin arrived on Martyr's Square around 11:00 a.m., he found himself in the midst of an enormous crowd. Several hundred thousand people had assembled to pay their last respects to Gemayel, who was gunned down in a brazen attack in Beirut on Tuesday. Police later estimated that fully 800,000 people came to Thursday's funeral.

Gemayel's coffin approached Beirut slowly, in a convoy of cars heading down from his hometown in the mountains. Departing early in the morning, the flower and rice covered cask finally arrived in the Lebanese capital around midday. A group of crying and screaming pall-bearers carried the coffin the final distance to St. George's Cathedral.

Mourning, though, wasn't the first thing on the minds of many of those present. Indeed, in Lebanese politics, death has become something so quotidian that the period of mourning has been radically shortened. "This is a demonstration against Syria," said Amin, describing the popular reaction in Beirut to Gemayel's death. "After all, Pierre Gemayel died because of his criticism of Syria." Not far away, a group of clamoring youths burned a likeness of Syrian President Bashar Assad in a side street. "Syria out of Lebanon!" they chanted, and: "Death to Syrian traitors!" Amin was pleased. "We all think that way," he said.

And Amin was right -- Thursday really did seem like a tragic repetition of March 14, 2005. Once again, hundreds of thousands of Lebanese marched their way through Beirut. Once again, they were there to mourn a murdered politician. Once again, there was a veritable ocean of Lebanese flags. And once again, the masses had identified a common enemy: Syria and its claim to political control over Lebanon. But most of all, the brutal murder of Gemayel seems to provide the momentum necessary to unite the political movement against Syria's influence in Lebanon. The movement may have seemed uncertain under the leadership of Hariri's son Saad -- but it seems all the stronger now.

From the very beginning, the funeral was more than just a public ceremony. The sheer size of the funeral procession sent a clear message from the anti-Syrian alliance surrounding Prime Minister Fuad Siniora clearly to the Shiite Hezbollah and its allies in the pro-Syrian camp. Until Tuesday's murder, the assumption in Beirut had been that Hezbollah leader Sheikh Hassan Nasrallah's self-professed "Party of God" would send hundreds of thousands of Shiites onto the streets to underscore Hezbollah's claim to power. As it turned out, the men and women who took to the streets were Hezbollah's opponents -- shaken up by another political murder and united in their desire to end Syria's influence in crisis-racked Lebanon.

The situation in front of the cathedral showed just how divided Lebanon's political scene is -- and how badly poisoned the relationship between the two currents in the government has become. Hariri, a critic of Syria, and Druse leader Walid Jumblatt were welcomed with applause and chanting. Pro-Syrian politicians such as Nazrallah's deputy Hussein Khalil, who had attended the rally in an effort to demonstrate Lebanese unity, were whistled down angrily. The crowd immediately began to chant "Out with Syria!" Lebanon's pro-Syrian president, Émile Lahoud didn't even show up, choosing instead to remain in his well-guarded palace.

Following the funeral ceremonies, members of the so-called March 14 Movement, a group which sprang to life following the assassination of former Prime Minister Rafik Hariri in February 2005, used the opportunity for further verbal attacks against Syria. "They will not take away our determination to live and to be free," Jumblatt called out. The UN tribunal, which Hezbollah opposes, is to clear up the Hariri murder and to punish those responsible. Already it is clear that investigators have their eyes on Syrian agents and senior officials in Damascus. In order to prevent the tribunal from being created, a number of Hezbollah ministers resigned from the Lebanese cabinet in an effort to deprive it of any legitimacy.

Saad Hariri on Thursday joined those calling for the creation of the court, which would very likely be based outside of Lebanon. "We will continue to come here until the truth comes out and we have achieved justice," Hariri shouted to the crowd from behind bullet-proof glass. The politician, the son of the assassinated former prime minister, seemed intent on staying out of the political conflict currently splitting his country. Instead, he called for the unity of all Lebanese. "They said that you are a virtual majority," he said referring to Syria. "But we are the reality and they are virtual. National unity is stronger than their arms  and their terrorism." His comments were greeted with frenetic cheering from the gathered masses. 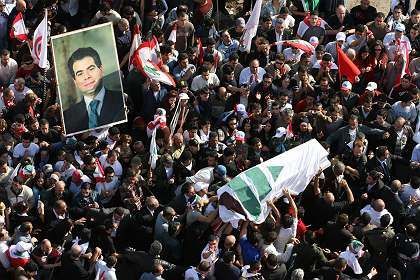 At the end of the demonstration, Amin the student was satisfied. "We have shown that we are strong," he said on his way home. "No one can rule against the will of such a mass of people." Amin, a supporter of Saad Hariri, was especially pleased that there had been no sign of violence. Many had worried that the funeral would see angered Christians venting their anger through rioting and violence. The Lebanese army had even gone so far as to mobilize thousands of soldiers and virtually block off the entire city center. But in the end, there were only a few who collapsed because of the heat.

Nevertheless, the impressive show of power on Thursday will likely serve more to intensify the tensions within Lebanon than to relax them. The fundamental conflicts have gone nowhere. Indeed, Saad Hariri and his supporters want to once again try and force President Emile Lahoud to approve the UN tribunal. Should he once again refuse to sign, they are considering asking the UN to exert pressure. But in moving forward, every one of the anti-Syrian cabinet members has put his life in danger -- each of them could very well be at risk of following in Gemayel's fatal footsteps. Should just one more minister be removed from the cabinet, the government would have to be dissolved.

Hezbollah, though, is likely to react quickly as well. The group's head, Sheikh Hassan Nasrallah, will likely not allow much time to pass before organizing a mass demonstration of his own, observers say. Such a protest, in an attempt to topple the Siniora government, had been scheduled for Thursday -- until Gemayel's murder made it a political impossibility. Now, though, the anti-Syrian camp has taken the initiative and Nasrallah has to find a new strategy. The Gemayel assassination has robbed him of his position of power.

The period of mourning comes to and end on Friday. Most in Beirut assume that a mass demonstration of Hezbollah will soon follow.