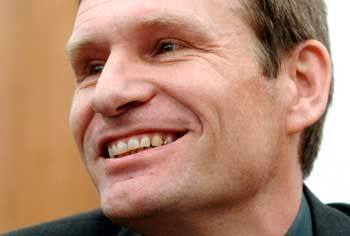 Armin Meiwes in December 2003 during his first trial for cannibalism. He admitted eating 44 pounds of his victim.

Armin Meiwes is back and so is his tale of extreme sado-masochism that has shocked and fascinated the world. The self-confessed German cannibal, sentenced to over eight years for manslaughter in 2004 for killing and eating 44 pounds of a man yearning to be eaten, went on trial for the second time on Thursday after his original verdict was deemed too lenient.

Looking markedly thinner after spending over two years in jail, Meiwes, 44, entered the Frankfurt district court in handcuffs and a smart dark suit, to fight a case that has confronted the German legal system with an unprecedented dilemma -- whether killing a man who wants to be eaten can constitute murder.

Tall, gaunt and remarkably ordinary looking, he smiled nervously at his team of defense lawyers before sitting down in front of a large folder of documents. People who have interviewed him have said he is of above average intelligence, well-spoken and polite. His lawyer has reportedly described him as so harmless that he would allow Meiwes to look after his children.

Meiwes, a computer repair man obsessed with cannibalism since puberty, gave a full confession at his first trial. He met 43-year-old Berlin computer engineer Bernd-Juergen Brandes via the Internet where Brandes had sought someone to kill and eat him.

The details of the case, so shocking that many newspapers have shied away from printing them, were brought to life once more on Thursday as prosecutors gave a full account of the spring day, March 9, 2001, when Meiwes and Brandes met.

What happened next in Meiwes home, a rambling half-timbered house left to him by his late, domineering mother, is gory in the extreme.

Brandes asked Meiwes to emasculate him and drank half a bottle of Schnapps and painkilling tablets to cope with the pain. Meiwes obliged before they both tried to eat Brandes's penis together.

After Brandes became unconscious from loss of blood, Meiwes took him to a slaughtering room he had set up in his house. Led on by sexual motives, he laid him on a table in the slaughter room and switched on a video camera to film proceedings, said Köhler.

Ultimately, Meiwes cut the body up into little pieces, filming much of the procedure. He ate 44 pounds of his victims remains in the following months, defrosting pieces portion by portion. He kept the skull in a freezer and buried other parts in his garden.

He ate the meat prepared as normal dishes, said Köhler. He also watched the video for his sexual gratification.

Even as he ate Brandes, barbecuing some parts and following gourmet recipes for others, Meiwes continued to advertise for other victims. It was not until December 2002, after he was reported to the police by an Austrian student, that he was arrested.

Meiwes has not denied what happened -- that would be difficult given that police have 4.5 hours of video tape recording the deed -- but has argued that he was fulfilling the victims desire to be killed.

His defense team is seeking the lesser conviction of killing upon request," a form of illegal euthanasia, which carries a term of six months to five years. Prosecutors accuse him of murder to gratify his sexual desires and of other crimes linked to the cutting up of the body, which would carry a term of at least 15 years. German courts tend to follow the recommendations of the Federal Criminal Court, which has called for a murder conviction, but they are not obliged to.

Meiwes, who according to psychiatrists reports presented at the first trial is sane but deeply disturbed, told the court in 2004 how he had fantasized about consuming a man to fill the void caused by the sudden departure of his father. Using the pseudonym Franky," he had been in touch with hundreds of people on the Internet, where he posted ads seeking fit men for "slaughter." 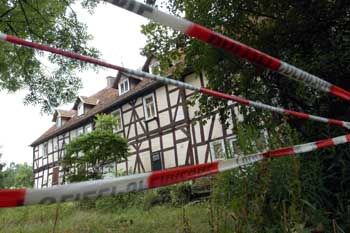 Joachim Bremer, one of Meiwess three defense lawyers, said: In e-mails, Internet chats, and telephone conversations, Brandes had clearly expressed his desire for his life to be ended. Brandes had told Meiwes he wanted to be nullified, said Bremer.

Herr Brandes consistently expressed the desire to be emasculated, to pass out, then to be killed and to be consumed. He even wrote a will before traveling from Berlin to meet Meiwes, said Bremer.

But Köhler, the prosecutor, said Meiwes was aware that his yearning for self-destruction resulted from a severe disturbance of the soul.

Police estimate there are 8,000 to 10,000 people in Germany alone who are using Internet chat rooms to share fantasies about eating a person or being eaten.

Professor Arthur Kreuzer of the Institute for Criminology at Giessen University said: This is unique, even compared with all other cases of cannibalism. The defendant left it totally open to the victim whether he wanted to be killed or not. I cant imagine a murder where the victim wants the deed to happen and is even encouraging the person to do so.

You can only explain it with the technology of the Internet that two reciprocally perverted people, the one a sadist and the other a masochist, meet, agree everything down to the last detail and then do everything with the condition that the victim can say no at any time.

Kreuzer said the decision to overturn the verdict and order a retrial may have been influenced by the publics moral outrage at the relatively lenient sentence for a deed seen as deeply perverted.

A documentary on its way

After his initial trial brought him worldwide attention, Meiwes rejected cash offers from film companies and publishers and instead assigned the global rights to his story to Hamburg-based publisher Stampfwerk for no charge, on condition that it gives an accurate and full account of his case.

Meiwes is writing his memoirs in jail and Stampfwerk plans to publish them this autumn. It is also preparing a documentary on the case and both HBO and the BBC have expressed an interest in it, said Guenter Stampf, Stampfwerks managing director.

Meanwhile Meiwess lawyer Harald Ermel has taken legal action in US and German courts to prevent the release of an American-made film -- "Butterfly, a Grimm Love Story" -- which he claims is so closely based on his case that it may prejudice his trial.

Produced by California-based film production company Atlantic Streamline, it stars Thomas Kretschmann, who played the ships captain in "King Kong," and Keri Russell, who is to appear in "Mission: Impossible III."