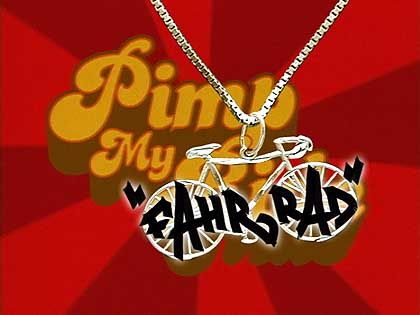 It's "Pimp My Fahrrad" from MTV in Germany!

"What a loser!" Karol must be thinking to himself as he struggles to pedal his rusty ride -- complete with shrill squeaks announcing his lameness to the world -- along the cobblestones of Hamburg, Germany. A tragedy, really. After all, as a DJ, he's supposed to be cool incarnate. Hip. A chick magnet. But with a rickety hunk of junk between his legs, this guy just isn't.

And it's not for lack of trying. The rest of his urban gear seems to work -- the record bag, the throwback 80's training suit, the right piercings and dark shades. But that bicycle. What's a hipster to do?

Enter MTV Germany. Following the success of MTV's US show "Pimp My Ride" -- a show dedicated to the transformation of junky jalopies into serious city rigs complete with booming base woofers, sexy paint jobs, a heavy dose of chrome and the occasional pool table or swimming pool in the back of a pick-up -- MTV Europe wanted some of the same. "Pimp My Fahrrad" -- German for bicycle -- was born.

"Pimp my ride works worldwide," says Head of Development and Acquisition for MTV Central Anke Greifeneder. "And the success of the show has inspired MTV Europe to launch pimp projects elsewhere."

Karol off to the Reeperbahn?

"Pimp projects." Hmm. Sounds almost like MTV is planning to send DJ Karol off to the Reeperbahn for a bit of red-light ego massaging. Yet despite the once sinister connotation of the P-word -- one more associated with sending fresh meat out on the street than with refining one's hip credentials -- "pimping" now has more to do with style and flair, of creating the extravagant. And "Pimp My Ride" has been wildly successful doing just that -- building on a rich American tradition of transforming bashed-up beaters by lowering the suspension, throwing on glass pack mufflers and finishing it off with 18-inch chrome rims. 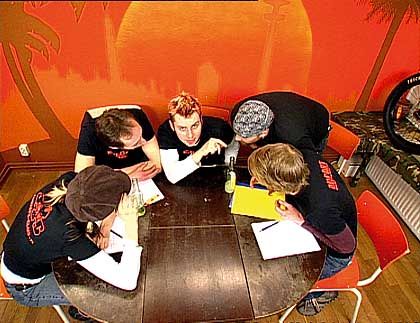 The team from Elbcoast Psycles ready to pimp your bicycle.

Yet with the German auto tradition more focused on the latest and fastest model of phat Mercedes coupe or sleek BMW convertible than bringing back ancient Opels, MTV here needed to find something else to pimp. Cool cat wannabe Karol, on his dumpy two-wheeler, is just the thing.

And to his credit, the Hamburg DJ desperately in need of a cycle makeover realized it. After sending in a letter and pleading his case to "Pimp My Fahrrad" producers, Karol won a trip to the funkiest bicycle shop in town, Junior's Club, where a crew of monkey-wrenchers was waiting to convert his sloppy old embarrassment into a personalized pimp-mobile. Standard "pimp jobs" -- offered by the shop even before the show went on air -- include adding stretched-out handlebars, oversized tires, and motorcycle-esque foot pedals. But for the purposes of this show, it's the personal touch that's the kicker. Pimping a bike for Karol the DJ means turning it into something that can dovetail into his turntablist style.

To do so -- and to cram a rather long and not always riveting process into a 30 minute slot Germans will watch -- "Pimp My Fahrrad" took a number of pages out of the "Pimp My Ride" book. The board-like meeting in the back room, for example. The crew -- augmented by a couple of extra pimps and preferably upbeat, funny and über-cool -- decides on how to attack the two-wheeled rust bucket. When the cameras finally roll at Elbcoast Psycles -- the name adopted by the bike shop for the show -- the shooting is clipped, fast, and furious, with hip-hop and surf music samples pumping between scenes. A side-burned and bug-eyed guy named Till -- also called the "iron man" (frame modification specialist) -- gesticulates wildly in front of a huge machine as he bends out parts for a new frame. Kaddy, the only girl on the crew, puts together a sound system for the new bike, while stocky gear-and-crank master Nickel gives advice while eating a cheeseburger.

The chop-shop show is the product of brainstorming between Riesenbuhei Entertainment, OKD, and MTV. Creators say they had been mulling over ideas on how to do a German version of the US hit-show, but budgetary concerns called for something more humble -- car pimping can run up astronomical bills. Then there was the question of the public. Would the German reputation for modesty get in the way of all that flash? Producers were looking for something to pimp, they just weren't sure what. But somebody had heard of place in Hamburg called Juniors Club -- a shop selling funky bikes along with ones they tooled-up themselves. A rush of phone calls and meetings later, and a pilot episode was shot, well received, and the series launched. Teutonic bike pimping was born.

Shop owner Michael Franzke says that while his garage specializes in modifications, the American-made chopper-style bikes sell best out-of-the-box. Decked out with ape handle bars and sidesaddles, these models look more like motorcycles than pedaling machines. Still, the modification game seems to have tapped in to a growing trend in Germany and is paying off for the shop.

"We've been open since June 2004," says owner Franzke. "Customers come from all over Hamburg and Germany, and sometimes we get business from our Web site. (The trend for these modified bikes) is only getting bigger."

Coming up next: Pimp my Toilet

But on the show, pimp projects are more about adapting the bike to the individual -- and the end result is way out there. When the sheet is finally lifted from Karol's new bike in a Dr. Frankenstein-like ceremony, the final product is outlandish and unbelievable. A megaphone, mini-turntables, disco-balls, club lights, and even bumping, bass speakers have made it onto the frame. Karol strides through a gauntlet of high-fives and tough-guy hugs as he excitedly thanks his bike pimps. 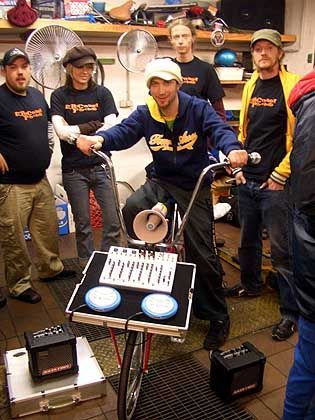 With all the home-boy humor spoken in the language of Goethe, it's easy to see the show as a sort of rib at the original. But there's something inherently funny about seeing Germans going US street. The overdone kitsch is intentional and the mini-scale of the whole thing makes the show even funnier.

And MTV seems happy enough with the formula to have several other pimp shows in the works. In Italy, Pimp My Scooter is on the way. For Holland, there's Pimp My Room. And while the bike idea may have been temporarily shelved after only seven episodes, the producers have other plans in store for German TV. The "Pimp my..." formula is set to soon take on toilets, little brothers, and even a German hot-dog stand.