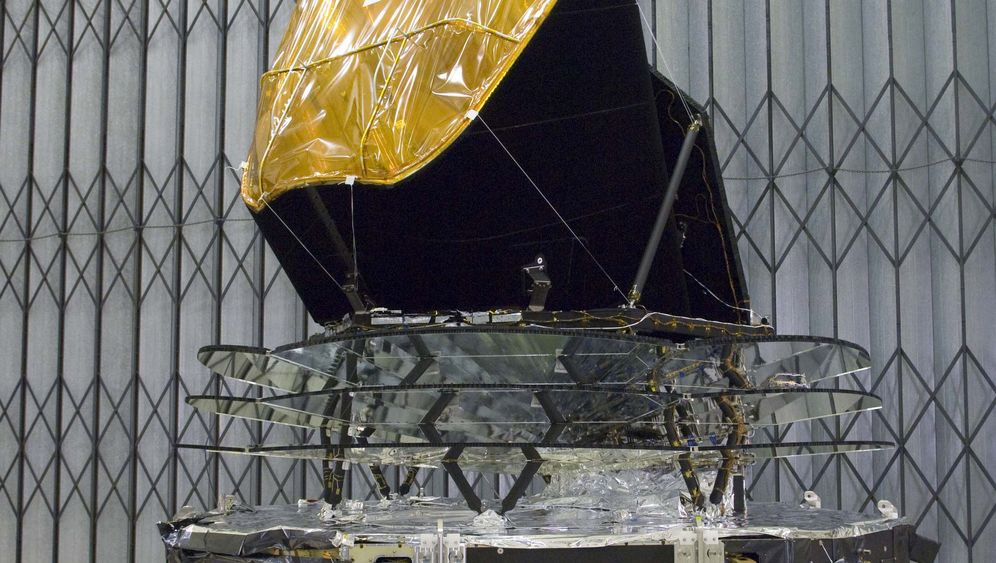 In the beginning there was energy. When the universe was born 13.7 billion years ago, the temperature was in the quintillions of degrees. But the more space expanded, the weaker the fire of creation became.

Soon afterwards, the young, expanding universe entered a critical phase: The red-hot primeval soup had cooled sufficiently so that some of its energy was converted into matter. Over time, galaxies, suns, planets and, finally, animals and human beings emerged from these myriads of original atoms.

The rest of the original radiation no longer played a particularly important role in the development of the cosmos, and has wafted through the vast expanses of the universe ever since -- a sort of echo of the distant boom of creation as it continues to cool. To this day, every cubic meter of space contains about 400 of the original protons. Without them, it would be colder in space than it already is -- by 3 degrees Celsius, or about 5 degrees Fahrenheit.

Astrophysicists stumbled upon the light from the dawn of time in the 1960s. With the help of their radio telescopes, they discovered background radiation in the microwave range, which was being received uniformly from all directions.

Now, half a century later, astronomers have measured this residual radiation from the big bang more precisely than ever before. To do so, they used the European Space Agency's "Planck" research satellite, which was launched into outer space with an Ariane rocket in 2009. Using the data gathered by Planck, scientists have compiled a temperature map of cosmic background radiation, which resembles a colorful pattern of dots.

"It's like a baby photo of the universe," says Torsten Ensslin of the Max Planck Institute for Astrophysics in Garching, near Munich. "It's supposed to reveal to us how the big bang actually unfolded."

'Earliest Structures of the Universe'

The scientists at the institute have been performing their calculations since the space telescope completed its measurements a year ago, and cosmologists are now anxiously awaiting the analysis of the Planck satellite data. The European Space Agency (ESA) plans to unveil the results next week. But no matter what they look like, interpreting the image of the delivery room of the cosmos will probably keep astrophysicists busy for years to come.

What is so fascinating for astrophysicists seems somewhat unspectacular from a layperson's perspective. On the face of things, they are looking at almost immeasurably tiny temperature differences. That's because although background radiation comes from everywhere, it isn't always the same. In some places, the residual radiation from the big bang is a few millionths of a degree warmer, and in others a few millionths of a degree cooler.

These temperature fluctuations make up the difference between empty space and galaxies.

Cosmologists conjecture that some of the photons came from the regions in which matter was already more densely packed than elsewhere in the early days of the universe. Precisely these agglomerations were the seeds from which galaxies and stars eventually sprouted. "Thus, the earliest structures of the universe are frozen into the microwave background radiation," explains astrophysicist Ensslin, a member of the team evaluating the Planck satellite data.

The team is searching for conspicuous patterns in the temperature distribution, which will provide critical information on the details of how the universe was created -- such as how quickly the universe has expanded since then, how much normal matter it contains, as well as how much invisible dark matter, the composition of which is still somewhat of a mystery. All previous measurements of background radiation, which were admittedly still quite inaccurate, seemed to confirm the standard model of the big bang, or inflation theory. According to that scenario, the universe was literally created out of nothing.

The idea is that all being began in the realm of the microcosm. According to the wondrous laws of quantum physics, even a vacuum isn't entirely empty. Ghostlike particles are constantly forming and then disappearing again. Nuclear physicist Hans Christian von Baeyer used poetic words to describe the dynamic vacuum: "It's like a still lake on a summer's night, a lake whose surface ripples gently while pairs of electrons and positrons everywhere light up like lightning bugs."

But something far more dramatic can take place in the microcosm. It isn't just that particles appear out of nowhere. It's also possible for the vacuum to jump into a higher energy state, just like that. This vacuum energy then acts like anti-gravity, explosively pushing space apart, which is precisely what led to the big bang.

According to inflation theory, within a fraction of a second an area of space smaller than an atom grew to the size of the universe we can comprehend today. At the end of this inflationary expansion phase, the gigantic amount of energy stored in the vacuum transformed itself into radiation and matter. The first stars were born 200 million years later.

Very few cosmologists expect the measurements from the Planck satellite to contradict inflation theory. It would be a huge surprise if they did. But the satellite data could force physicists to come up with more cumbersome equations.

"Of course, a theory can eventually become so complicated," says Ensslin, "that we really don't want to believe in it anymore."

According to the standard model, mysterious particles known as inflatons were responsible for the expansion at the beginning of the universe. They must have left behind a characteristic pattern in background radiation, which would be visible in the Planck satellite measurements. It could also turn out that different types of inflatons had to exist. But it's still completely unclear how several types of these exotic particles could have been created.

Those who are skeptical about the inflation model hope that the Planck data will even furnish clues to a completely different story of the creation of the universe. For them, creation out of nothing seems too much like a mathematical magic trick.

"The idea that everything began with the big bang is no longer entirely convincing," says Jean-Luc Lehners, a researcher at the Max Planck Institute for Gravitational Physics in Potsdam, just outside Berlin. "There are many indications that there was a before."

A possible alternative to the standard big-bang theory is the model of a "cyclical universe," whereby the cosmos is constantly being reborn and then vanishing again, in a potentially endless cycle of birth, death and rebirth.

Each time the universe came to an end, after many trillions of years, when the last stars had been extinguished and matter had dissolved, there would be another dramatic event, a new beginning. According to this theory, the universe, which had been continually expanding until then, would suddenly contract. The contraction would lead to the accumulation of an enormous amount of energy, creating tension that would subsequently be released in an original explosion, expanding space once again.

As in the inflation model, the new universe therefore begins with a massive release of energy, from which the stars later condense. "But what happens in a fraction of a second, according to inflation theory," says cosmologist Lehners, "takes a billion years in the cyclical universe."

The contraction and renewed expansion of a cyclical universe would also generate telltale background radiation, albeit with a different pattern than with an inflationary universe. "This is why the details are so important now," says Lehners. "We will have to take a close look at the Planck measurements."

In addition to these two theories, there are other ideas on how the universe may have been born. According to an especially bizarre scenario, two parallel universes once collided with one another, triggering the big bang and the birth of a new universe.

As absurd as it may sound, this too would have led to the creation of background radiation, and actual observations reinforce the theory.

"In studying the big bang, we are in a situation similar to that which occurred when America was discovered," concludes astrophysicist Ensslin. "We know the route to the new continent, and with Planck we can travel along the coastline, but we probably won't be finding the exact location of El Dorado just yet."