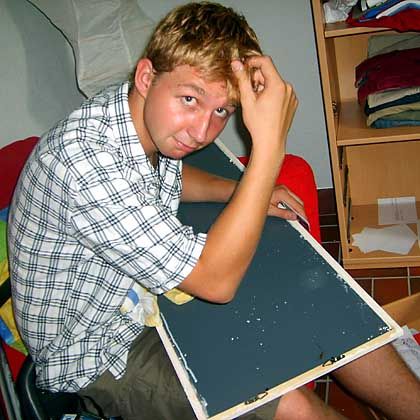 "When I got out of the plane in Greensboro in the US state of North Carolina, I would never have expected my host family to welcome me at the airport, wielding a Bible, and saying, 'Child, our Lord sent you half-way around the world to bring you to us.' At that moment I just wanted to turn round and run back to the plane.

Things began to go wrong as soon as I arrived in my new home in Winston-Salem, where I was to spend my year abroad. For example, every Monday my host family would gather around the kitchen table to talk about sex. My host parents hadn't had sex for the last 17 years because -- so they told me -- they were devoting their lives to God. They also wanted to know whether I drank alcohol. I admitted that I liked beer and wine. They told me I had the devil in my heart.

My host parents treated me like a five-year-old. They gave me lollipops. They woke me every Sunday morning at 6:15 a.m., saying 'Michael, it's time to go to church.' I hated that sentence. When I didn't want to go to church one morning, because I had hardly slept, they didn't allow me to have any coffee.

One day I was talking to my host parents about my mother, who is separated from my father. They were appalled -- my mother's heart was just as possessed by the devil as mine, they exclaimed. God wanted her to stay with her husband, they said.

Then, seeing as we were already on the topic of God's will, the religious zealots finally brought up a subject which had clearly been on their minds for a long time: They wanted me to help them set up a Fundamentalist Baptist church in my home country of Poland. It was God's will, they said. They tried to slip the topic casually into conversation, but it really shocked me -- I realized that was the only reason they had welcomed me into their family. They had already started construction work in Krakow -- I was to help them with translations and with spreading their faith via the media.

It was clear to me that there was no way I was going to do that. The family was appalled. It was a weird situation. After all, these people were my only company at the time. If I hadn't kept in touch with home through e-mail, I might have been sucked into that world.

It was only after four months that I decided to change my host family. I had kept hoping that things might improve, but it was futile. Telling them that I wanted to go was the most unpleasant moment I experienced in that half year. Of course they didn't understand -- how could they? They had grown up with their faith and were convinced of it, and then suddenly I turned up and refused to fit in.

From that moment on, I counted the days. The two months that followed my decision were hell. My host parents detested me. There were constant rows. I could sense that they just wanted to get rid of me. They didn't know what to do with me any more.

67 days later, I was finally in a new family. They were young, actually more friends than host parents, and I was very happy there. Because my new family was only 50 kilometers away from the other one, I was distrustful at first and afraid that things wouldn't be any better. But the change was worth it.

Despite everything, I still haven't come to terms with my experience. I want to write to the religious family soon and explain to them, clearly and calmly, why things went so wrong. It shouldn't just end this way."

Adapted from an interview conducted by Magdalena Blender.