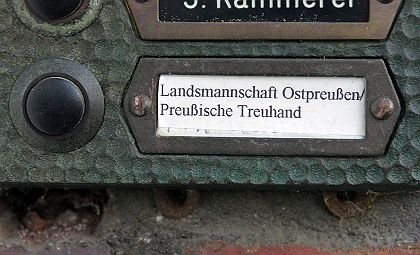 The doorbell of the Prussian Trust in Düsseldorf. Most Germans don't take its claims for wartime compensation seriously.

Alexander von Waldow, 83, lives in a world of his own devising, where the Third Reich still exists. The 1937 German borders -- which extended deep into present-day Poland -- still look logical to the retired architecture professor, who would like to see the sandy regions east of the Oder and Neisse Rivers placed under European Union administration and German established again as an official language there (alongside Polish). "Then the Germans who were expelled after the war could go back and develop the land again," he says. "The Poles can't do it themselves anyhow."

Von Waldow sees the German invasion of Poland in 1939 as "the wrong reaction, from a Christian perspective, to Polish provocations along the border." Still, he sees it as an injustice that once-Prussian soil should have been taken from Germany after the war and handed to Poland. Von Waldow now sits on the supervisory board of the Prussian Trust (or sometimes "Prussian Claims, Inc."), a firm that recently entered a lawsuit against Poland in the European Court of Human Rights in Strasbourg. Twenty-two German expellees are demanding their land and other property back from the Polish government.

In 1945 the von Waldows had to leave their ancestral manor called Mehrenthin, in Pomerania. The property is now known as Mierzecin, and the Polish owners have turned it into a chic hotel and conference center. Of course, says von Waldow, if the Prussian Trust has its way, no one will get chucked unceremoniously out the door -- he's not a monster. He's also not well-known in Germany, even if his name in Poland has been plastered across the front pages of newspapers (even, sarcastically, in fraktur, the old-fashioned German script).

"A campaign of lies," is what Polish President Lech Kaczynski labelled the Prussian Trust lawsuit in a Polish newspaper called Fakt, which happens to be owned by Germany's mass-market Springer publishing conglomerate. "My government is preparing a number of steps to keep our property well protected," promised his brother, Jaroslaw, who happens to be prime minister.

Free publicity for a marginal group

The Polish government's concern may be justifiable. Whether the Kacyznski twins' populist tub-thumping will be good for Polish interests, though, is another matter -- after all, Warsaw's attacks against the Prussian Trust have done little more than to raise the profile of a marginal group whose efforts up till now have resulted in failure.

Expellees founded the Trust in December 2000 with a head office in Düsseldorf. They've had to switch law firms twice in the meantime, since their ultimate goal of winning back property -- after clear international treaties which ended both the Cold War and World War II -- looked hopeless. There is "no legal basis" for individual damage claims by expellees, Polish lawyer Jan Barcz and his German colleague Jochen Frowein wrote in a 2004 opinion. "I bet the suit will be thrown out," Frowein remarked on the Trust's latest attempt.

Successive governments in Berlin have refused to endorse such claims. And even if members of the Prussian Trust are personally close to Germany's Federation of Expellees, the organization's controversial leader, Erika Steinbach, has distanced herself sharply from the lawsuit.

The great defenders of Polishness

In Warsaw, none of this seems to matter. For the Kaczynski twins, the lawsuit represents a perfect opportunity to pose as grand defenders of Polishness. The Prussian Trust, for them, is not some isolated right-wing organization but the leading edge of a wider movement in Germany. The goal of it, they claim, is to recast Germans in World War II as victims rather than executioners: "If German elites don't react firmly, the nation could again move in a direction that has already ended once in a great European tragedy," Jaroslaw Kaczynski warned in Fakt.

Warsaw now wants to negotiate with Berlin to solve the problem of the expellees' lawsuit. The government believes a clause should be added to the good-neighbor treaty signed between Germany and Poland in 1991 -- a clause that would commit Berlin to regulating and handling individual claims for damages from the war. Then, according to Warsaw's logic, Poland will finally be safe from the claims of expellees.

Berlin, though, isn't considering a "Full Coverage Clause," according to the German Foreign Ministry. From Germany's point of view the matter has been settled for a long time: Expellees have no individual rights to damages. The loss of onetime German lands in present-day western Poland has to be seen as war reparations. Millions of expellees and refugees, moreover, were given collective burden sharing payments for their war-related suffering. As far as Berlin is concerned, these payments after the war closed the chapter on the issue of expellees.

Warnings against the twins' agitation have grown louder in the meantime, even in Warsaw. Piotr Buras, a Warsaw political scientist, has mentioned a possible paradoxical outcome if the Kaczynskis push their demands through in Berlin. His argument: If the German state declares itself ready to listen to expellees' claims, it has to admit they have merit -- something it so far hasn't done. "And that," says Buras, "really would be a triumph for the Prussian Trust."