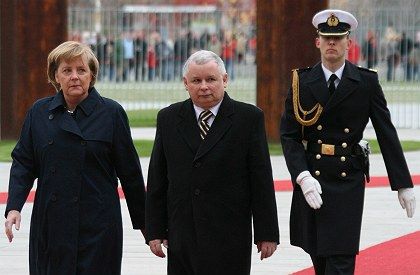 Polish Prime Minister Jaroslaw Kaczynski was in Berlin on Monday for a visit with German Chancellor Angela Merkel.

German Chancellor Angela Merkel and Polish Prime Minister Jaroslaw Kaczynski said what everyone expected them to say on Monday. Namely, that they both hope to improve difficult Polish-German relations. So far, though, Kaczynski's first-ever visit to Berlin has provided little indication as to how exactly that improvement is to be accomplished.

Indeed, far from bringing flowers for his hostess, Kaczynski came bearing demands for an agreement barring World War II reparations and complaints about the planned Russia to Germany gas pipeline in the Baltic Sea. Both issues have hurt German relations with their neighbor to the east in recent years, with tensions particularly surging since Jaroslaw's brother Lech Kaczynski became president last autumn. Jaroslaw became prime minister in June.

Kaczynski on Monday said he was specifically interested in an agreement barring Germans from seeking reparations for lands seized from them when Poland's borders moved west following World War II. For the past two years, the German group Prussian Claims Inc. has been preparing a suit for the European Court of Human Rights in Strasbourg demanding that they receive compensation for lost properties. In exchange for such an agreement, Kaczynski said he would block Polish counter-efforts to seek reparations from the Germans for damage done during World War II.

"It is high time to solve the question of demands," Kaczynski told the tabloid Bild am Sonntag. "On both sides it is a question of political will. Poland, at least, is ready for an agreement."

Merkel, though, declined to take up the offer, saying that such a treaty would only further complicate matters. She did, however, once again state the German government's position that it will not support individuals who seek reparations from Poland. "And that will stay that way," she said.

Poland has also kept a watchful eye on the activities of the Federation of Expellees, a German group which seeks to build a permanent center in Berlin devoted to the history of those Germans expelled from Poland and elsewhere following World War II.

Germany's neighbor is especially unhappy about the Baltic Sea pipeline which bypasses Poland on its way from Russia to Germany -- a pipeline which the Polish Defense Minister Radek Sikorski compared to the 1939 Molotov-Ribbentrop pact that divided Poland up between Nazi Germany and the Stalinist Soviet Union.

Kaczynski says his country is concerned about being overly reliant on Russia for its energy supplies and wants to be able to pipe in energy from Western Europe too if necessary. However, Merkel did not budge from her support for the pipeline, saying it is important to establish a Europe-wide energy market. She promised she would make Poland's access to European gas markets a priority during the German EU presidency during the first half of 2007.

Beyond the differences of position, however, the rhetoric on both sides of the Oder River has often been rather pointed in recent years with the Kaczynskis having relied on a populist platform to propel them into office. Indeed, Wolfgang Thierse, a vice president of the Bundestag, said on German radio on Monday that conflicts with Germany seem to be well organized in Poland and are often exaggerated. Specifically, he pointed to the Polish uproar following a recent, measured speech made by German President Horst Köhler to the Federation of Expellees.

The deputy head of the German-Polish parliament group in the Bundestag, Georg Schirmbeck, also had harsh words for Kaczynski. Comments made by the twins, Schirmbeck said, foster doubt about Poland's reliability. "If the Kaczynski brothers want to survive politically, they can't just do it with domestic populism," Schirmbeck said. "But at some point they also have to achieve successes in Europe and present those successes to their citizens back home."

During Lech Kaczynski's campaign for president, he was fond of criticizing Germany and warning his voters that the Germans wanted to dominate the European Union. Furthermore, he warned, Germany wanted to reinterpret its Nazi past. More recently, an incident which saw Polish warning shots fired at a German tourist boat near a Polish port briefly raised tensions between the two countries.