Christian Democratic Union chairwoman Angela Merkel could soon be conducting Germany in the orchestra of the international community.

Angela Merkel was upset. "I told him that I would one day push him into the corner just as he had done to me," she said. "I need more time, but one day it will happen. And I can hardly wait." That was eight years ago. Gerhard Schroeder was still governor of Lower Saxony and Merkel was Germany's environment minister. The two were sparring over energy policies.

This week, Merkel became Germany's first ever female chancellor candidate. Now, she not only has the potential to drive him into the corner but also out of Berlin. And, for the first time, the battle for the country's most important political post will see a woman pitted against a man. It will be a different campaign than ever before and Schroeder's Social Democratic Party (SPD) is already saying the "tone of the campaign will be different." After all, they add, the voters expect it.

So does that mean the campaign will be a cuddly affair? Will it be more political softball as seen recently in the North-Rhine Westphalia state elections? Juergen Ruettgers, the victor in regional elections there, emphasized the broad support his party recieved from women in the state, Germany's most populous. That, he said, can partially be attributed to the the civilized tone of the campaign there. 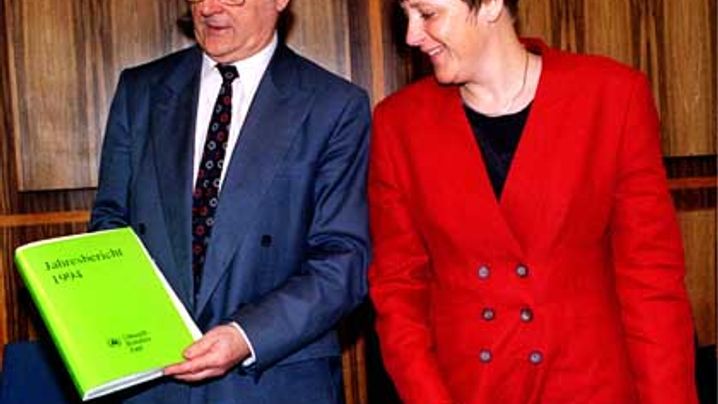 Indeed, the political battle Ruettgers waged against the state's deposed governor, Peer Steinbrueck of the Social Democrats, will be remembered more for the charm exuded by the candidates than for any acrimony. And it may just continue. At a large Protestant gathering in Germany this week, SPD party chief Franz Muentefering and Angela Merkel were nothing but gracious to one another. The atmosphere was so warm, in fact, that it fuelled speculation about a future grand coalition that could bring together the Social Democrats and the Christian Democrats under a single political umbrella.

Muentefering's cordial gestures come as little surprise. She may lose out to Schroeder in popularity polls, but the latest survey shows Merkel's party gaining an absolute majority in expected autumn elections. Merkel is a survivor, she will put up a good fight against Schroeder and the SPD's top brass know not to underestimate her. Indeed, Merkel's political ascent began in 1999 amidst unfavorable conditions as the Christian Democrats fell into a major campaign donation scandal. Senior CDU members, including former Chancellor Helmut Kohl, were caught red handed with illegal party slush fund accounts, and the crisis became the worst in the history of the Christian Democrats. Weaker politicians would have fallen. But Merkel dug in her heels and began to forge her own path.

With a letter published by the Frankfurter Allgemeine Zeitung newspaper, Merkel began the process of cutting the cord from her über-mentor in the party, Kohl, who once lovingly called her "mein Maedchen," or my girl. Merkel's move was tantamount to a cultural revolution within the Christian Democrats -- after all, it was the former chancellor who brought her into his cabinet, first as minister for family affairs and women and later as environment minister. After Wolfgang Schaeuble, who was then the leader of the CDU, got sucked into the quicksand of the donor scandal, Merkel's ascent became inevitable.

Once fierce competitors, Edmund Stoiber has put his support behind Angela Merkel.

But for Merkel, it has hardly been smooth sailing at the top. She has survived turbulence, hostility and Machiavellian intrigues hatched by her rivals within the party. There are plenty within the CDU who didn't think she could hack it. Merkel first wanted to run for chancellor back in 2002, but was manoeuvered aside by Bavarian governor Edmund Stoiber, who heads the CDU's Bavarian sister party, the Christian Social Union. And even after his close defeat in the last federal election, Stoiber long kept open the option of a second candidacy.

Now, however, Merkel is the Christian Democrat's candidate for the chancellery, and the ranks are closing in behind her. And on Monday, Stoiber stood behind her nomination.

Her crowning, however, didn't come without a little outside help. Indeed, it was her opponents, Schroeder's Social Democrats, who paved her way by calling for German general elections to be moved up by a year. The Union's hand was forced and there was little room for tactical maneuvers by party rivals.

Still, though, the CDU victory in North Rhine-Westphalia also helped validate her claim as the conservatives' top candidate. For now, Merkel's detractors have been pushed off stage. Furthermore, Merkel has proven that she, as head of her party and its parliamentary group, can take on her adversaries from within -- including men like her former deputy, Friedrich Merz, who threw in the towel after his legendary quarrels with Merkel.

The incumbent, Schroeder, has noted that his party trailed the Christian Democrats by a similar margin in the summer of 2002. The Social Democrats ultimately prevailed, but only with the help of their junior coalition partners, the Greens. The polling trends this time around are clearly on Merkel's side, and there's a new attribute which may sway voters -- frustration over a package of painful economic and social welfare reforms passed by Schroeder's government during the past two years. Surveys show between 47 and 48 percent of voters casting ballots behind the CDU/CSU were the election held now. Winds of change are in the air and even the media has begun to bid its farewell to Gerhard Schroeder.

But is Germany ready for a female chancellor? Statistically, it does seem to be. One recent poll showed 74 percent of German respondents saying gender would play no role whatsoever when it came time to casting their votes. There are, however, lingering doubts that have long haunted Merkel. Even though they support the idea of a female chancellor, 71 percent of those polled believe a woman would have a harder time at the job than a man. And unlike her male adversaries in the CDU -- be it Hesse governor Roland Koch, head of Lower Saxony Christian Wulff, or former deputy Merz -- Merkel never had the chance to cut her political teeth in the party's youth wing, the Junge Union (Youth Union). She came into the party after the fall of the Wall and will always be seen as a latecomer.

More than that, Merkel is the candidate who came from the East. When Kohl came to power in 1982 after a vote of no confidence in the government at the time, Merkel -- divorced in the early 1980s and now married to scientist Joachim Sauer of Berlin -- was living on the other side of the Wall. On paper, the lifestyle Merkel led in East Germany sounds like it could be part of the West German anarchist movement of the 1980s. Searching for places to live in East Berlin, she even "squatted" apartments. But unlike the West, there were more mundane reasons for squatting in East Germany -- you merely had to register them with the authorities after you moved in. Like so many other aspects of her life in East Germany, Merkel's biography can't simply be pigeonholed into western definitions.

In September, Merkel could be raising her arms to embrace her supporters if she wins the election.

Like most in East Germany, Merkel was a member of the FDJ (Free German Youth Organization). She was also the secretary for agitation and propaganda at the Academy of Science. People would later attempt to draw attention to her past as a way of branding her with the scarlet letter of communism. But given the relative insignificance of her roles, the allegations never stuck. Nor did they do any serious damage to her political aspirations. For the most part, she has made little fuss about her life in East Germany -- in part because she didn't want to hurt anyone, but also, possibly, because she didn't want to expose herself to difficult questions.

Recently, as seen at a CDU party convention in Dusseldorf, Merkel has begun speaking more openly about her past. In speeches, she has talked about some of her experiences under communism -- the freedom her parents gave her in talking openly about politics at home, or, for example, about the neglect disabled people were subjected to under the communists. By sharing fragments of her biography, Merkel is trying to reach out to the souls of a party that is mainly anchored in western Germany.

The path to the CDU

When the Iron Curtain fell in 1989, Merkel's path to the CDU was anything but predetermined. Back then, the members of the opposition in East Germany still had to find political partners in the West. Some joined the Greens, some hooked up with the SPD, while others found the CDU. For Merkel, the decision not to join the Social Democrats was an easy one -- their collegial greeting "comrade" reminded her a little too much of the days behind her under the East German regime of Erich Honecker. Finally, she joined the liberal Demokratischer Aufbruch (Democratic Upheaval) which later, for want of alternatives, merged with the East-CDU. In her biography of Merkel called The Girl and the Power, Evelyn Roll, a correspondent for the daily Sueddeutsche Zeitung quotes Merkel as saying: "I wanted to get into (Germany's parliament) the Bundestag. I wanted a quick German reunification and the creation of a market economy."

Much has been written of the fact that Merkel, a trained physicist, approaches politics the same way she would a scientific experiment: She first predicts the results and then begins working her way backwards through the steps of the experiment. Yet these are all attempts to categorize the often unpredictable course of politics. Nor do Merkel's experiments work every time. For example, her recent health-care reforms were stalled because she was only able to garner the support of Stoiber and his CSU party after making significant compromises. Even with her successes at the top, she has also had policy failures.

Merkel's ascent to the top of the Union began six years ago. But what would her career have enjoyed its skyrocketing trajectory if it hadn't been for the CDU donor scandal? Would she now be head of her party or would she have a slighter, but still prominent role, as governor of Mecklenberg-Western Pomerania, the state were she grew up?

One thing is certain: Merkel possesses a political instinct that helps her to know better than anyone else in her party how to recognize opportunities and seize them as her own. She has successfully defended her position at the helm of the Christian Democrats and she now has a strong shot at representing it as Germany's first women chancellor.

This summer, she faces the fight of her political life.