It has been a year since Sunni insurgents ripped a hole in the glorious dome here of one of Iraqs most sacred Shiite shrines, shattering its 72,000 golden tiles and unleashing a tide of national sectarian bloodletting. Not a single brick of the mosque has been moved since. 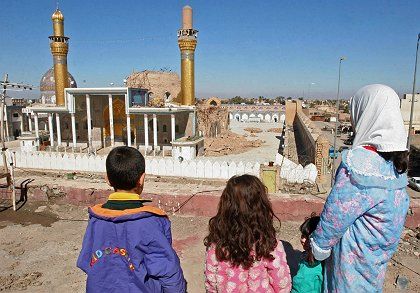 Children stand near the remains of the Shiite Golden mosque in Samara, 96 km (60miles) north of Baghdad.

There has been no rebuilding and no healing; the million annual pilgrims, and the prosperity they spread, are gone. The roads south to Baghdad and north to Tikrit are pocked with roadside bombs and fake checkpoints where travelers are abducted. The citizens of this Sunni city, who protected and took pride in the Shiite mosque for more than 1,000 years, say they want to lead the reconstruction, but Shiites will not hear of it.

And a proposal from the Shiite-led government to send thousands of Shiite troops to provide protection for a reconstruction project has been met with threats of bloodshed.

Symbols of political paralysis are everywhere in this country. But few have the potency of the blown-up Mosque of the Golden Dome, site of the graves of two of the figures most revered by Shiites, the 10th and 11th imams in a line of direct descendants of the Prophet Muhammad.

From the moment the shrine was destroyed, Iraqis -- already accustomed to extraordinary violence -- knew that life had taken an even darker turn. Within hours Shiite death squads sought bloody revenge, dozens of Sunni mosques were burned and Sunni imams were dragged out into the street and killed.

(That terrible day, one year ago according to the Islamic lunar calendar, was commemorated by Shiites from Najaf to Basra on Monday. But even as they were observing the occasion with a moment of silence, bombs in busy Baghdad markets left at least 67 more people dead. There were no commemorations in Samarra, just the ever-present reminder of the mosque itself.)

Pieces of the blue and gold tiles that adorned the facade of the great mosque, formally known as the Askariya Shrine, where graceful Arabic script from the Koran praised God and peace, sit shattered in the empty courtyard.

There are continuing discussions about rebuilding the shrine, and the United Nations has been approached. The local Sunni tribal elders have put forth a plan to rebuild, but it is unlikely that Shiite religious and political leaders will trust them.

Both groups say reconstruction of the dome would be a powerful unifying force, a symbol of hope where hope is scarce. But any large-scale project remains complicated not only by the distrust between Sunnis and Shiites, but by the precarious security situation in Samarra itself, where a force of only about 300 national and local police officers is trying to control a city of about 100,000.

Some of men currently responsible for guarding the shrine, drawn from the nations Facilities Protection Services, are considered suspect, possibly infiltrated by Sunni militants, according to Americans and Iraqis.

The walls still stand, but the doors are locked, and no prayers are conducted there. Nearby shops are open but desolate.

Residents, for whom the mosque was a source of livelihood as well as pride, say they would like nothing more than to have it rebuilt. But they have no faith in the central government, fearing that Shiite politicians would use the reconstruction as an excuse to take control of the mosque.

Before the attack, more than a million Shiites streamed into the mosque each year, visiting the graves of the 10th and 11th Imams. They also came to honor Muhammad al-Mahdi, who became the 12th Imam when he was only 5 years old, in A.D. 872.

The graves, at the foot of a spiral staircase some 50 feet below ground, were not damaged in the explosion, a caretaker said. But the dome, the defining feature of the mosque, renovated in 1905, was ravaged.

The Iraqi police have started constructing a snipers post on a roof across the street. When the Americans arrived Saturday to check up on the effort, it took less than 20 minutes for militants to begin attacking them. Bullets whizzed over the mosque and the American position.

A stray round hit a civilian standing at the shrines southern gate. An American medic pulled him to safety and treated his wound. The fight was brief, less than half an hour, with the militants finally scurrying away with the Americans in pursuit. But it was a reminder of how difficult it would be to secure the site for any major reconstruction project.

Samarra was untouched in the American-led invasion of 2003, but since then it has fallen to militants twice, only to be retaken in major American military operations.

The Americans, who try not to patrol too near the mosque, keep one base in the city. They acknowledge that if they leave any time soon, the militants will seize the city again.

The roads running south to Baghdad and north to Tikrit remain plagued by attacks, mostly with roadside bombs.

The government in Baghdad is discussing a plan to create a special brigade of 3,500 soldiers to secure the roadways and protect a team of workers who would rebuild the mosque. But if those soldiers are primarily Shiites they will not be welcome, Iraqi officials say.

If they send Shiites from the south, they will be killed, said Lt. Col. Abdul Jalil Hanni, the commander of the Iraqi police here. They should make the brigade with people from Tikrit and Samarra, he said. Al Qaeda will still make trouble, but it can be done.

Residents of Samarra, who are very careful with their words because militants still hold much of the power here, remain as devastated by the destruction as the Shiites.

It was a catastrophe for Samarra and the Islamic world, said Zuhair Majeed, 26, whose shop is at the foot of the shrine. The shrine has been in Samarra for 1,200 years. It was the people of Samarra who protected it, reconstructed it and served it.

But the people of Samarra also have chosen not to even clean the rubble from the site, because they believe that the real culprit in the bombing has yet to be found.

You must know that the tribal leaders have not removed a single brick until now, in order not to change the crime scene, said Sheik Qahtan Yahya al-Salim, the general secretary of the tribal sheiks council in Samarra.

Haitham al-Sabaa, of the Badri tribe, a former chicken farmer from Samarra, was the architect of the plan, American and Iraqi officials say. He has not been caught.

Before the war Mr. Sabaa was not particularly religious, old friends say, but joined Al Qaeda in Mesopotamia after the American invasion. They say he worked with Abu Musab al-Zarqawi, the Jordanian-born Qaeda leader who was killed by American forces in Iraq last June.

Mr. Zarqawi explicitly wrote that attacking the apostate Shiites was integral to undermining the American occupation. Mr. Sabaa, the officials said, was hungry to prove himself in the Qaeda hierarchy and orchestrated the attack. For him it was not about religion but about being a big man, said one person, who recalled many a wild and drunken evening with Mr. Haitham before the invasion. He is now considered a prince in the Qaeda structure in Iraq, American and Iraqi officials said.

Many residents here have come to believe an alternative version of how the attack occurred, blaming Iranian agents and pointing to the fact that the attackers were wearing commando uniforms. But there is no evidence to support that theory.

What is clear is that the attack was carefully planned and calculated.

A caretaker at the shrine described what happened on the day of the attack, insisting on anonymity because he was afraid that talking to an American could get him killed. The general outline of his account was confirmed by American and Iraqi officials.

The night before the explosion, he said, just before the 8 p.m. curfew on Feb. 21, 2006, on the Western calendar, men dressed in commando uniforms like those issued by the Interior Ministry entered the shrine.

The caretaker said he had been beaten, tied up and locked in a room.

Throughout the night, he said, he could hear the sound of drilling as the attackers positioned the explosives, apparently in such a way as to inflict maximum damage on the dome. Many Sunnis in Samarra say they remain as pained by the shrines destruction as the worlds Shiites. I still feel sad despite the passing of a year, said Abu Hameed al-Samaraee, 43, a teacher.

I can describe what was done as exactly like what happened to the World Trade Center, he said. Bad people used this incident to divide Iraq on a detestable sectarian basis.