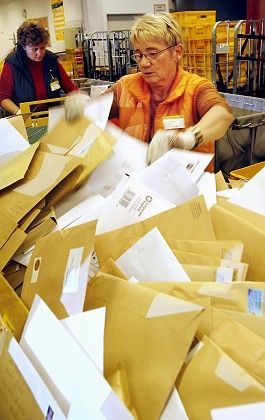 A German postal worker sorts the mail: Could she lose her job to a 13-year-old?

The teenagers would be responsible for delivering junk mail -- including catalogs, brochures and pamphlets. Büttner first told the German daily Die Welt on Monday that TNT's executives had "crossed the line." In a subsequent press release, he described the business plan as an "outright scandal" and indicated that the Dutch logistics firm also has long-term plans to employ underage workers for the delivery of regular mail. TNT rejected these allegations as wholly inaccurate, news agency DPA reported on Tuesday.

"We work with adolescents aged 13 and up when the parents give their permission," TNT CEO Roland Jager told the newspaper. Under German law, such a delivery job is permissible for 13-year-old minors, provided it does not entail more than two hours of daily work between 8 a.m. and 6 p.m., does not interfere with school and the parents give the go-ahead. Additional exceptions also apply for certain types of activity in the performing arts and for delivery jobs. Kids working for TNT would earn between €10 and €15 per dayshift, Jager said.

By comparison, German postal workers earn an average hourly salary of €10.54, including benefits. Büttner complains that "employment contracts based on negotiated wages and social insurance contributions cannot possibly compete with pocket-money salaries." In addition to being deputy director of one of Germany's largest trade unions, Büttner is also deputy chairman of the supervisory board at Deutsche Post, the formerly state-controlled German postal service and TNT's immediate competitor.

TNT is Germany's second-largest postal service provider after Deutsche Post, and the Dutch enterprise has given its competitors a run for their money. The German business daily Handelsblatt reported on Tuesday that TNT plans to expand its express delivery operations in an effort to challenge DHL, a subsidiary of the privatized German postal service.

Büttner maintains that TNT's business strategy is unjust: "If child labor is henceforth going to be heralded as an occupational success, then we've really arrived in early capitalism." But the practice of employing minors for delivery jobs is not unusual, and a quick glance at job brokerage sites reveals that a number of marketing firms are offering delivery jobs to 13-year-olds. Thus, the row over the adolescent delivery workers in North Rhine-Westphalia seems to be part of a larger push by Ver.di and Deutsche Post to secure better working conditions for their employees. Specifically, Büttner wants the government to ensure a minimum wage for postal workers of €7.50 per hour.