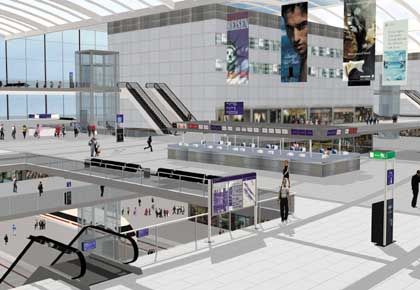 A computer simulation of BBI Berlin-Brandenburg Airport expected to open in 2011.

Following German reunification in 1990, officials in Berlin began dreaming of regaining the soon-to-be German capital's past status as a cosmopolitan world city. Long gone were the days of the Roaring '20s when Berlin competed with London and Paris as the swinging toast of Europe. Four decades of division had made Berlin unattractive to foreign companies and even German industry. Those adventurous enough to bring workers here, soon found the city was not only provincial, but also isolated from the rest of Europe. The main problem is that the city doesn't have an airport big enough to handle major long-haul flights. If you want to go to Mallorca, no problem. But if you want to go to Malaysia, better base your German operations near less-than-exciting Frankfurt.

Executives at the Japanese multinational Sony, which moved its European headquarters here in 1999, have long complained that they couldn't board a plane in Berlin and wake-up fresh in Tokyo the next morning. Indeed, the only long-haul flights available from the city go to New York, Africa and the Middle East. If any of Berlin's 3.5 million residents want to travel to Asia or Australia, they have to catch a connector flight to Frankfurt or another major European hub. A plan to transform the former East Berlin airport Schönefeld into the much grander Berlin-Brandenburg International Airport has been on the drawing board for years, but funding, corruption and a major NIMBY lawsuit have kept it from moving forward.

The dream went something like this: Berlin builds airport, Lufthansa comes. Berlin suddenly transforms it into a major international hub. But pesky politics, a questionable construction bidding process and the lawsuit got in the way. Fifteen years on, Lufthansa has already established a major second international hub in Munich. It has also acquired Swiss in Zurich, effectively making the city its third hub, and Berlin significantly less attractive. A further blow came when Leipzig, another major eastern German city, moved forward with an ambitious plan to expand its airport and landed a deal with express courier company DHL to move its European cargo hub from congested Brussels.

But Berlin finally got a needed bit of good news on Thursday. A federal court in Leipzig ruled against the 4,000 neighbors named in the lawsuit, saying the airport could be expanded. But the court did set limitations that could hinder the airport's importance as a hub. The judge said the airport would have to ban flights between midnight and 5 a.m. and it will have to take significant steps to reduce noise pollution. Currently, Schönefeld is the only airport in the city that permits 24-hour take-offs and landings. When it makes the transformation to BBI, the city plans to close its other airports. This, ironically, means that if a plane destined for Berlin arrives after midnight, it will have to be diverted to Leipzig -- 200 kilometers to the south.

Still, officials in Berlin and Brandenburg are popping open the cheap bubbly. The airport, which the city-state of Berlin and the state of Brandenburg plan to build together, is now expected to open in 2011. The terminals will be capable of handling 22 million passengers annually and as many as 40,000 jobs could be created in a region that is struggling with chronically high unemployment.

Will it be too little, too late? An editorial in the Berliner Zeitung wryly notes that without companies like DHL or Lufthansa to provide services and jobs, it is unlikely the expensive airport would be able to generate enough business to keep it from running at a loss. That would, at least, fit in with Berlin's image as a bankrupt and poorly managed place.