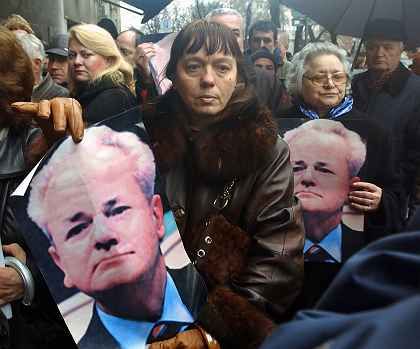 Slobodan Milosevic remained as polarizing a figure in death as he was in life on Monday, following the results of an eight-hour autopsy by Dutch pathologists. Their preliminary report showed the ex-president of Yugoslavia died of a myocardial infarction -- a heart attack -- in his jail cell at the UN war crimes tribunal in The Hague. But with toxicology tests still to be completed, speculation persists that Milosevic, who had been standing trial for more than four years on 66 counts of war crimes and genocide in Croatia, Bosnia and Kosovo during Yugoslavia's multiple ethnic conflicts in the 1990s, might have been poisoned or have taken his own life.

Tribunal spokeswoman Alexandra Milenov said the autopsy revealed Milosevic had been suffering from two heart conditions, which she did not name. The coroners, supervised by two Serbian experts from the military medical academy in Belgrade, determined the 64-year-old's heart problems might have caused his death. Asked if poisoning could have caused the heart attack, Milenov said it was too early to draw conclusions.

Found dead in his cell Saturday morning, Milosevic was known to have suffered from heart ailments and high blood pressure. His reccurring health problems caused numerous interruptions of his trial. Milosevic's legal adviser Zdenko Tomanovic said the former president had feared he was being poisoned. He showed reporters a six-page letter Milosevic allegedly wrote Friday claiming that traces of a "heavy drug" were found in his blood. The letter was addressed to the Russian Embassy asking for help. Tomanovic said Milosevic was "seriously concerned" he was being poisoned. He cited a Jan. 12 Dutch medical report which showed traces of medication used against leprosy and tuberculosis, but said Milosevic had never taken them.

According to a Dutch news report, citing an unidentified "adviser" to the UN war crimes tribunal, also said traces of "unusual drugs" were found in a blood sample taken from Milosevic in recent months. The Dutch state broadcaster NOS did not identify the drug found "in a test done in recent months," but said it could have had a "neutralizing effect" on Milosevic's other medications. Doctors found traces of the drug when they were searching for an answer to why Milosevic's medication for high blood pressure was not working, the report said.

A bid to go to Russia?

A Dutch toxicologist told the Associated Press that he found traces of an unprescribed drug in Milosevic's blood earlier this year that may have reduced the effectiveness of other medications he was taking. Donald Uges suggested Milosevic may have taken the drug himself in a bid to be released from jail and get medical attention in Russia.

"First he wasn't taking his medicine. Then he was forced to take it under supervision and his blood pressure still didn't come down. So his camp said 'you see, these Dutch doctors don't know how to treat him and he should go to Russia,'" Uges said.

Chief UN prosecutor Carla Del Ponte said claims that Milosevic committed suicide or was poisoned were "just rumors" and told reporters: "You have the choice between normal, natural death and suicide."

She noted it was the second death in a week at The Hague tribunal's detention center -- former Croatian Serb leader Milan Babic committed suicide last Sunday. Del Ponte said it was possible Milosevic had committed suicide to thwart the impending verdict in his trial. She said that the death of the man known as the "Butcher of the Balkans" made it all the more urgent to catch others blamed for the horrors of the Balkan wars.

"It is a great pity for justice that the trial will not be completed and no verdict will be rendered," Del Ponte said, according to the Associated Press. Milosevic's death "deprives victims of the justice they need and deserve."

Milosevic was arrested in 2001 and put on trial in February 2002, the first sitting head of state indicted for war crimes. It appeared his remains will be buried in Serbia. Tomanovic said Milosevic's son Marko would collect the body even though authorities in Belgrade have issued an international arrest warrant for him. The lawyer also said the family wanted Milosevic's funeral to be held in Belgrade, but it was unclear if Serb authorities will approve those plans.