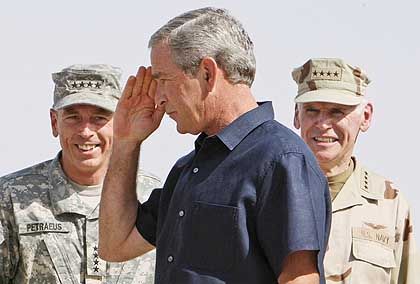 President Bush arrives at Al Asad Air Base in Anbar Province, Iraq, as Gen. David Petraeus, commanding general of the multinational forces in Iraq, looks on.

President Bush made a surprise eight-hour visit to Iraq on Monday, emphasizing security gains, sectarian reconciliation and the possibility of a troop withdrawal, thus embracing and pre-empting this months crucial Congressional hearings on his Iraq strategy.

His visit, with his commanders and senior Iraqi officials, had a clear political goal: to try to head off opponents pressure for a withdrawal by hailing what he called recent successes in Iraq and by contending that only making Iraq stable would allow American forces to pull back.

Mr. Bushs visit to Iraq  his third  was spent at this remote desert base in the restive Sunni province of Anbar, where he had summoned Iraqs Shiite prime minister, Nuri Kamal al-Maliki, and others to demonstrate that reconciliation among Iraqs warring sectarian factions was at least conceivable, if not yet a fact.

After talks with Gen. David H. Petraeus, the top American commander in Iraq, and Ryan C. Crocker, the ambassador to Iraq, Mr. Bush said that they tell me that if the kind of success we are now seeing here continues it will be possible to maintain the same level of security with fewer American forces.

Mr. Bush did not say how large a troop withdrawal was possible. Nor did he say whether he envisioned any forces being withdrawn sooner than next spring, when the first of the additional 30,000 troops Mr. Bush sent to Iraq this year are scheduled to come home anyway.

Still, his remarks were the clearest indication yet that a reduction would begin sometime in the months ahead, answering the growing opposition in Washington to an unpopular war while at the same time trying to argue that any change in strategy was not a failure.

Those decisions will be based on a calm assessment by our military commanders on the conditions on the ground  not a nervous reaction by Washington politicians to poll results in the media, Mr. Bush told a gathering of American troops, who responded with a rousing cheer. In other words, when we begin to draw down troops from Iraq, it will be from a position of strength and success, not from a position of fear and failure. To do otherwise would embolden our enemies and make it more likely that they would attack us at home.

To ensure security, the White House shrouded Mr. Bushs visit in secrecy, issuing a misleading schedule that said he would leave the White House on Monday and Air Force One would refuel in Hawaii. Instead, the president left the White House on Sunday night, traveled to Andrews Air Force Base without the usual motorcade and after an overnight flight arrived in Iraq on a sweltering summer afternoon when temperatures reached 110 degrees.

Mr. Bush flew with Secretary of State Condoleezza Rice and his national security adviser, Stephen J. Hadley, an extraordinary gathering of top leaders in a war zone. Defense Secretary Robert M. Gates and Gen. Peter Pace, the chairman of the Joint Chiefs of Staff, flew to Iraq separately and joined them.

The Anbar region is a Sunni stronghold where in recent months there have been significant improvements in security. Administration officials have been touting the gains as evidence that the increase in American troops has proved a success  a word Mr. Bush used eight times in his public remarks on Monday.

Mr. Hadley, briefing reporters, recalled a military intelligence officers dire warning a year ago that Al Qaeda controlled the provincial capital, Ramadi, and other towns in the region. Anbar Province is lost, he quoted the analyst as saying then. Mr. Hadley was apparently referring to Al Qaeda in Mesopotamia, the homegrown Sunni Arab extremist group that American intelligence agencies have concluded is foreign led. The extent of its links to Osama bin Ladens network is not clear.

Not A 'Publicity Stunt'

On Monday, after meeting with some of the local Sunni leaders who only months ago led the struggle against the American presence in the region, Mr. Bush held up Anbar as a model of the progress that was possible.

When you stand on the ground here in Anbar and hear from the people who live here, you can see what the future of Iraq can look like, he said, night having fallen at the base.

During his visit, Mr. Bush did not leave the base, a heavily fortified home to about 10,000 American troops about 120 miles west of Baghdad. Mr. Hadley said planning for the trip had started five or six weeks ago.

Administration officials rejected the notion that the trip was a publicity stunt. They said Mr. Bush wanted to meet face-to-face with General Petraeus and Mr. Crocker, who are to testify before Congress about progress in Iraq next week, and with Iraqi leaders he has been pressing from afar to take steps toward political reconciliation.

By summoning Mr. Maliki and other top officials to the Sunni heartland, a region the Shiite prime minister has rarely visited, Mr. Bush succeeded in forcing a public display of unity. Meeting with the Iraqi leaders in a buff-colored one-story building near the runway, Mr. Bush effusively greeted President Jalal Talabani, the last of the five officials to enter the small conference room. Mr. President, Mr. President, the president of the whole Iraq, Mr. Bush said, kissing Mr. Talabani three times on the cheeks.

The government they represent, of course, is based in Baghdad, Mr. Bush said, appearing with Ms. Rice and Mr. Gates in front of two parked Humvees at the base, but theyre here because they know the success of a free Iraq depends on the national governments support from the bottom up.

Iraqs foreign minister, Hoshyar Zebari, who was visiting neighboring Iran when Mr. Bush and the other top administration officials arrived, was conspicuously absent. Mr. Zebari, a Kurd, said he had been aware that high-level visitors from the United States were coming but that his trip to Iran had been planned long in advance and that the timing was strictly a coincidence.

In Washington, a spokesman for Senator Harry Reid of Nevada, the Democratic majority leader, said the presidents visit and his assertions about progress would do little to persuade skeptics. Despite this massive P.R. operation, the American people are still demanding a new strategy, the spokesman, Jim Manley, said in a telephone interview.

Anthony H. Cordesman, a senior fellow at the Center for Strategic and International Studies, said the reversal in Anbar had less do with American strategy than with local frustration over the extremism of Al Qaeda fighters trying to impose their doctrine. Mr. Cordesman suggested it was more of an anomaly than a model that could be applied elsewhere in Iraq, where sectarian divisions and strife appear to be worsening.

We are spinning events that dont really reflect the reality on the ground, he said.

While some administration officials have recently described the Sunni shift in Anbar as serendipitous, they portrayed the improvements as an outgrowth, at least in part, of the decision to send nearly 4,000 additional marines to the province as part of the White House strategy to increase troops. This is not serendipity, Mr. Hadley told reporters.

Distrust remains deep between Sunnis in Anbar and the Maliki government  and it is clear that Mr. Maliki sees effort by the American military to organize armed groups of Sunnis to assist American troops as a policy that amounts to assisting his enemies. Nor is it clear that the same model can be made to work in areas of Iraq where Sunnis and Shiites live together.

Sunnis, for their part, complain that the Maliki government has long failed to deliver services and to share oil revenue with Anbar. Describing the meeting Monday between the tribal sheiks and Iraqi officials from Baghdad, Mr. Gates said, There was a sense of shared purpose among them and some good-natured jousting over resources.

It remained unclear whether Mr. Bush planned to announce any specific troop withdrawals when he delivers the congressionally mandated report later this month.

Several administration officials say Mr. Bush and his commanders and military advisers have neared a consensus on beginning a reduction in American forces. Speaking to reporters traveling with him, Mr. Gates said Monday that he had formulated his opinion, though he declined to disclose it.

As he did in Washington late last week, Mr. Bush urged lawmakers to withhold judgment on the situation in Iraq until hearing first-hand reports next week from General Petraeus and Mr. Crocker. At the same time, though, he has used the White Houses considerable platform to assert his own views.

The strategy we put into place earlier this year was designed to help the Iraqis improve their security so that political and economic progress could follow, Mr. Bush said after meeting with Mr. Maliki and the other Iraqi leaders. And that is exactly the effect it is having in places like Anbar.