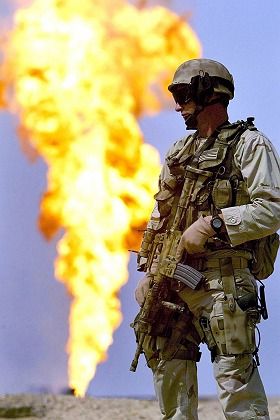 A US soldier guards an Iraqi oil well.

Long gone are the days when raw materials like oil and gas were considered strictly economic goods. Numerous fossil fuel-rich countries struggle with political instability, and new security risks are posed by the suspension or shortage of global energy resources. Energy supplies have been disrupted for strategic reasons (like Russias interruption of the gas supply to Ukraine in January 2006) and we have witnessed the use of resources as a strategic weapon by undemocratic problem states. Anti-Western energy-producer alliances have formed, for example between Venezuela and Iran, and then there is the threat of international terrorism to energy supplies. Not least, we face the global environmental problems that result from the use of fossil fuels. Climate change could cause hitherto unseen migration, as well as the outbreak of conflict over food, water, and energy. For the first time, in April 2007 at Great Britains urging, the UN Security Council addressed the implications of energy policy and climate change for security policy.

When geostrategic considerations are so relevant for energy policy, geostrategic organizations implicitly come into play. In addition to the United Nations and the European Union, NATO has also placed energy security on its agenda. NATOs 1999 strategic concept states that the alliances security interests could be affected by the interruption of critical resources. But this recognition has not been translated into concrete measures. Rather, in 2006 alliance member states were tasked to begin consultations about the direct risks of energy security in order to define the areas in which NATO might be relevant to the energy security interests of its members. In Bucharest member states agreed that NATO must become active. In particular they have agreed to share and fuse information and intelligence; advance international and regional cooperation; and support consequence management and the protection of critical energy infrastructure. They have also tasked the NATO Council to prepare a consolidated report on progress achieved in the area of energy security for consideration at the 2009 summit.

NATO has also been charged with developing principles for dealing with the strategic consequences of energy security -- in a manner that brings real added value to existing policies. There are two fields in which NATO can play an important role in energy security: NATO could be important in the protection of energy resources and their transportation routes. Currently, there are no international organizations or institutionalized cooperation mechanisms expressly responsible for this. Sea routes are particularly important for the transportation of unrefined oil. About two thirds of the worldwide oil transportation is carried out by tankers. In addition to the Panamá and the Suez canals, the Strait of Hormuz (between Oman and Iran) and the Strait of Malakka (between Malaysia and Indonesia), are particularly important. Terrorist attacks on these strategic points would have significant consequences for energy supply. Pipelines, which account for nearly 40 percent of transportation, are no less susceptible. NATO could be particularly useful in intelligence gathering by coordinating national intelligence agencies and making relevant information available to all member states.

For many years, the United States has had a vital interest in maintaining control over petroleum resources, particularly in the Persian Gulf. It is prepared to guarantee this with all available means -- including by force. According to experts, the cost of militarily securing energy imports accounts for a third of the US military expenditures. It is thus no surprise that the loudest voices clamoring for the alliance to take on a greater responsibility in energy security come from the United States. In fact, it is largely through US urging that NATO has taken up energy security and the protection of energy-relevant infrastructure. But also in Europe ever more policy makers see the protection of oil and gas transport routes as a possible task of armed forces.

The military securing of energy supplies is not without precedent. For example, during the 1980-1988 Iran-Iraq War individual NATO member states (including Great Britain, France, and the Netherlands) participated in Operation Earnest Will that secured tanker routes in the Persian Gulf. Nevertheless, we do not have to go as far as the director of the Washington Institute for the Analysis of Global Security who argued that the new security environment means that interventions in oil producing countries, naval activities along strategic choke points, and counterterrorist operations against petro-jihadists who wish to cripple the world economy by going after our energy supply are all but certain. None of the problems facing the worlds energy system are transitory, and the energy security challenge is only likely to grow over time.

Another way to involve the alliance would be in the form of a political committee to rally international solidarity in the event of the interruption of essential energy deliveries. In the aftermath of the winter 2005-06 gas conflict between Russia and Ukraine, Poland suggested establishing a kind of Energy NATO. The Polish proposal envisioned a solidarity clause in the event of threatened energy security, as well as the creation of common gas and oil reserves. Perhaps the best way to address energy security is within the parameters of NATOs Partnership for Peace program (PfP) since it includes numerous energy-producing states, among them Kazakhstan and Turkmenistan. One possibility would be the construction of pipelines with NATO participation. Another is to place greater weight on energy infrastructure security in the PfP training program.

It is however unlikely that NATO will actually assume an important role in energy security in the near future. For one, many countries believe that the involvement of a military alliance in energy security would send out the wrong signals. It might, for example, give rise to the impression that in the event of a shortage of vital resources, the West is prepared to protect its resources militarily at the expense of others. Moreover, NATO faces a complex dilemma: the common cause that had bonded the member states together for four decades is now gone. While the expansion of the alliances area of operations and its search for a new identity has not yet turned it into a global police force, it is jointly responsible for maintaining global order. This makes establishing a strategic consensus within the alliance on a case-by-case basis extremely challenging.

The future of NATO as an operative alliance and geopolitical focal point of its members is still wide open. The reason for this lies in two central structural problems of the alliance, neither of which directly concern energy security, but nevertheless have relevant consequences for the alliances ability to be effective in this area. Firstly, there is still the question whether a common -- or even a predominant -- threat perception exists among the now 28 member states. Given the very different analyses of key concerns, it is not clear that the alliance partners even have a common understanding of security itself, which is of course the necessary prerequisite of a common security pact. Not only do members threat perceptions vary but also the means of choice to respond to threats vary greatly. Today an array of European states see soft threat categories like climate change and mass environmental damage as hard security risks. The United States above all understands security primarily as a military matter.

The second structural problem, which is closely bound to the first, is the question of what the member states can afford and what they want to finance together. In particular there is the call to grant all members the possibility of selective participation in NATO missions. This would imply a drastic change in the meaning of the Washington Treaty: The consensus principle would be moot, the integrated military structure modified, and non-members included in the decision-making process. This is possibly the only way to give the coalition the flexibility it needs to respond to future conflicts.

Undesirable consequences could easily arise from such ad hoc coalitions relying on NATO resources. The result could be that the collective rationality of alliance decisions would no longer be a stabilizing factor in the international order but rather a destabilizing element. NATOs consensus-based decison-making model guarantees a high degree of collective rationality and hinders hegemonic abuse. But if the ad hoc model was not only possible in individual cases but the general rule, it would prompt mistrust from actors excluded from the coalition and could encourage new conflicts. Moreover, if NATO were to be turned into a mere toolbox for ad hoc coalitions, its cohesion would be undermined. A decision-making process in which all members take part -- at least in principle -- is a prerequisite for states participation in an alliance and their adherence to the guiding principles of that alliance.

If a flexible route is chosen, it would make sense to create a binding framework by defining the conditions for changing coalitions of the willing. It would thus be possible to develop a mechanism with which the North Atlantic Council could enable individual states or groups of states to use NATO resources or to approve a mission without all of the member states participating in it. Another option would be a procedure of constructive abstention or the strengthened cooperation of individual states under NATOs roof. However, in addition to the political problems that come with such approaches, there would still be the issue of financing.

From all of this we can draw a few conclusions about an adroit path for NATO to navigate energy security issues. First, under the auspices of NATO (or NATO member states) political committees should be created that also include non-NATO members. These committees would provide consultation on all questions of energy security. In this way, the impression would be avoided that the West wants to militarily secure its raw materials and energy supplies. Through this process the practical role of the alliance in securing and stabilizing energy supplies could be formulated. Finally, it nevertheless remains necessary to set a geopolitical energy revolution into motion that reconfigures energy policies in the context of an expanded security concept, such that investment in energy-saving technologies and renewable energies as well as the diversification of energy sources are seen as strategic investments that could prevent new military conflicts.