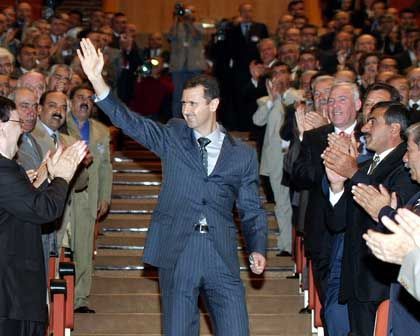 Syrian President Bashar Assad has hinted to his Baathist Party that its own survival requires real reforms.

It is 11 a.m. on a Monday morning in Damascus. The thermometer has already rocketed past 30 degrees Celsius and a line has formed outside of the Bakdash ice cream parlor in Souk al-Hamidiya, the Syrian capital's oldest bazaar. The local specialty is pistachio ice cream, and as the customers wait to get their hands on a scoop, their gazes are fixed on a small color television flickering in the neighboring store.

Usually, nobody would voluntarily watch Syrian state television. But today's different. One ice cream parlor visitor says that Bashar Assad, Syria's youthful, 39-year-old president, looks more serious today than he normally does. Assad is dressed in a gray pin-stripe suit and polka-dotted necktie and sits in the front row of an enormous congress hall at the 10th party convention of the Baath Arab Socialist Party.

The Syrians like Assad. After 40 years of total isolation, the lanky, sometimes wooden leader of Syria recently brought a little more freedom to the country, allowing people to install satellite dishes, buy mobile phones and open Internet cafes. The country's earlier ruler, Bashar's father Hafez Assad, ruled Syria with an iron fist, but after his death, Bashar, who was educated in London and trained as an eye doctor, inherited Hafez's power. Most of the television viewers here are convinced that Bashar sincerely wants to bring about change in Syria.

Sitting next to Bashar in the congress hall -- almost hidden in the never-ending row of gray suits -- is Abdul-Halim Khaddam, born in 1932. With his gray hair and smooth profile, he is a politician who would be easy to overlook. But Khaddam is the second most important man in the country. For more than 50 years, he was one of the elder Hafez's closest political allies. The atmosphere seems frosty between the two -- this dinosaur of the old guard vs. the young Assad, who promised his people when he took office that he would implement wide-reaching reforms. Only recently, Syria lost its influence in Lebanon and had to remove its troops from the country it once occupied. Neither man so much as glances at the other. But that doesn't come as a surprise for any of the visitors to the ice cream parlor. After all, in the eyes of many, unpopular Khaddam embodies the dark side of Syria's past.

Getting rid of the dinasaurs

And by the end of last week, things really had changed. Power player Khaddam announced he was resigning from office. And he wasn't the only one who bowed out: He was joined by other, old-guard members of the party leadership, including vice president Mohammad Zuheir Musharka and former Defense Minister Mustafa Tlass. Their collective departures have, at the very least, shaved a few years off of the average age of the party's leadership. But it also sends an important signal of reform. 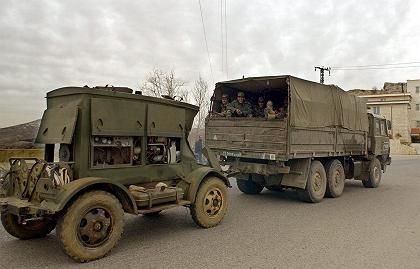 Syrian troops were forced out of Lebanon earlier this year.

But the personnel shake-up wasn't the only change the convention brought. The party also ruled to permit independent political parties in Syria. Of course this comes with considerable restrictions: The parties cannot be religious or ethnically oriented. Thus, the ban on the Muslim Brothers and on the Kurdish minority from holding political power remains in place. Both are political forces the Baathist fear, especially were they ever to join forces. As for the new groups that may get a place at the table -- the message is clear that they must still honor the Baath Party's claim to leadership.

Also noteworthy was the publicly announced decision to limit the authority of Syria's feared secret service. The secret police will no longer have authority in issuing licenses for new factories or for the opening of shops and restaurants. On the one hand, that shows the broad extent to which the secret service previously interfered with daily life. On the other, it shows that it is now possible that Syria could find its way to a little more freedom.

For many customers at the Bakdash ice cream parlor, these developments were nothing less than a small sensation. But one university professor, who was following the press conference on the small TV while he waited in line, expressed his disappointment. No one, he said, can call this a true political opening.

Free economy instead of true democracy

In a roundabout way, Bashar seemed to be hinting that in order to survive in the long-term, his party has to be prepared to undertake real reforms. Nevertheless, a serious run at an open democracy -- that would include a real multi-party system, the repealing of the four-decades-old national state of emergency and, especially, providing stable legal structures -- is not likely on its way. Bashar cannot go it alone and many of his supporters would have too much to lose under far-reaching reform.

Instead, Bashar prefers talking about his new economics policies, which are aimed at attracting new investors to the country and improving the quality of life for Syrians. Currently, the unemployment rate is 20 percent -- and even those with a good job can only expect to earn about 100 per month. And the biggest promise made at the party convention -- to introduce "mechanisms of a free market economy" and to combat corruption -- will remain half-hearted so long as the president must defer to the ruling clans.

Still, Bashar can still sell the 10th Congress of the Socialist Arabic Baath Party as a success. Following the personnel changes in the secret services and the military, Bashar has now shored up his political support among the Baathists. He has good reason for doing so, too: He must still be nominated by the party if he wants to seek re-election as president in two years.

That decision is still months away. But on this day, the Bakdash ice cream parlor in Souk al-Hamidiya has done brisk business. For the first time, the customers have found the president, the ice cream and Syrian state television to be the right combination. Not long ago, it would have been unpalatable.