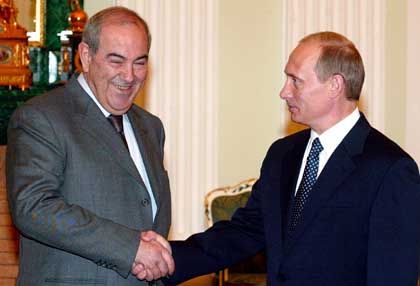 The meeting in the Kremlin was a frosty one. Earlier this week, Russian President Vladimir Putin gave his guest from Baghdad, Iragi interim head of government Ayad Allawi, a warm welcome. Verbally at least. But then Putin confronted his visitor with a blast of skepticism. With an eye on US-backed parliamentary elections scheduled for Jan. 30 in Iraq, Putin informed his guest that he "couldn't image how one could hold elections under the conditions of a complete foreign occupation." Then Putin bluntly expressed his doubts as to whether Iraq "could prevent a collapse of the country alone."

Like his good friend German Chancellor Gerhard Schroeder, Putin knows from the reports he gets each day that Allawi is totally dependent on his American occupiers. Indeed, Allawi embodies like no other the political weaknesses of the US's occupation policy -- a policy that, within one and a half years, has alienated many Iraqis.

Parallels between Iraq and Afghanistan

Increasingly, experts at Germany's Federal Intelligence Service and analysts in Moscow are comparing the guerrilla war in Iraq with the Soviet invasion of Afghanistan in the 1980s. Putin believes the situation in Iraq is a complete disaster -- anything but the Western democratization that was promised. Like Germany's chancellor and French President Jacques Chirac, Putin was a major opponent of the war. And, like them, his criticism had grown paradoxically quieter the clearer it became that this armed export of democracy is a catastrophic endeavor. 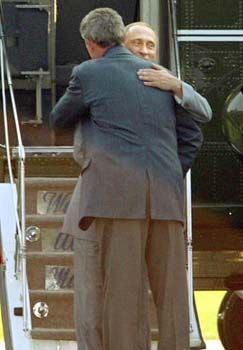 It's all hugs in this Camp David Kodak moment, but lately it's a knife rather than a hand Putin's been shoving into Bush's back.

Thumbing his nose at international diplomatic conventions, Putin even called on Americans in November to re-elect Bush. But the love fest didn't last long, and now Putin is singing a different tune about Washington. The comments Putin made at the Nehru Memorial Fund in New Delhi earlier this month -- largely ignored in the West -- were no less than polemical. There, he condemned "attempts to create a multifaceted and diverse modern civilization through the barracks principles of a unipolar world." He also indirectly accused the United States of being representative of "economic and social inequality." Further, he accused the US of standing for a "dictatorship in global affairs, even if presented in pseudo-democratic words."

Salvos from the Kremlin

While Putin was lapping up the applause in India, his political friends in the Ukraine suffered a serious political setback when they tried to perpetrate election fraud against the US-backed followers of opposition leader Viktor Yushchenko. But instead of backing off and taking a more humble approach, Putin seems to think the best defense is a good offense. At a press conference during his visit to Ankara earlier this week, the Russian lashed out once again. Speaking of the situation in Ukraine, Putin warned of a "destabilization" in the "post-Soviet region" and dared to compare it with the situation in Germany. "I do not want to see a situation like in Germany where it was divided between 'the West' and 'the East', into first- and second-class citizen," he said.

Again, without directly mentioning the US, he unleashed a polemic against the "kind but strict uncle" who dictates how "people of the so-called dark political color" should live their lives. In case there was any doubt about who he was targeting with the nasty words, he added: "And if the natives don't obey (their uncle), then they will be beaten with a rocket and missile club, as happened in Belgrade." 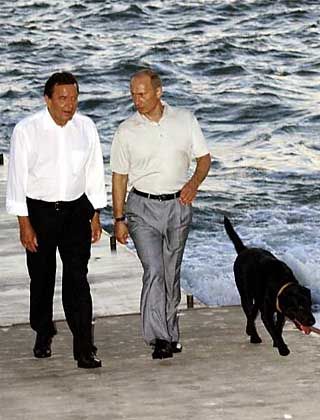 Putin and Schroeder in Russia. The two share the same stance against the war in Iraq.

Within the Commonwealth of Independent States, the former Russian satellite countries that gained independence with the fall of the Iron Curtain, there is only one president who has spoken as critically of the United States: Belarussia's Alexander Lukashenko, the last remaining dictator in the region. In a Dec. 6 interview with the Arab satellite channel al-Arabiya, he advised the Americans: "If you really believed in democracy, you would leave Iraq and let the Iraqi people determine their own future." Of course, Putin won't go as far as Lukashenko when it comes to Iraq, even if Moscow diplomats these days are taking a noticeably friendlier position to Europe's black sheep in Minsk than they did earlier. Lukashenko, at least when it comes to his ties with the West, long ago adopted German painter and poet Wilhelm Busch's line that, "Once your reputation's done, you can have a life of fun."

Of course, that's not an option for Putin, for whom there are important stakes in his relations with the West. Besides, there are plenty of CIS countries to the south and east of Moscow -- even if they are police state dynasties -- who have followed a policy of courting Washington's favor (often out of fear and desparation) rather than sticking with Russia on its consistently anti-US course. For them, it's a choice between the lesser of two evils.

Additionally, Moscow's diplomats recognize that every political attack against the American occupation of Iraq is tantamount to throwing stones from a glass house. After all, in Chechnya, the Russians and their vassals are acting, even if it is formally a Russian territory, as though in an occupied enemy country. And the attempts to bring a Muslim population closer to democracy using tanks so far haven't been any more convincing in Grosny than they have been in Baghdad.