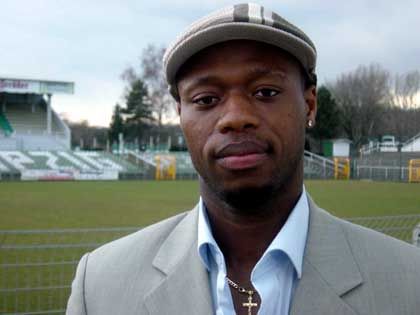 Adebowale Ogungbure, midfielder for FC Sachsen Leipzig, is once again the victim of racist fans.

Last Sunday's match between two German fourth division soccer teams once again betrayed the existence of lingering racism in German and European soccer. In the second half, fans from visiting Hallesche FC shouted ape noises at FC Sachsen Leipzig's Nigerian midfielder, Adebowale Ogungbure, and his Congolese teammate, Rolf-Christel Guie-Mien. According to Uwe Walter, a security adviser for FC Sachsen, the noises came from the visiting team's fan section after Ogungbure had been fouled.

An employee of the 'Fanprojekt' in Halle, a group formed to foster a positive fan culture, confirmed that roughly 50 of the 2,000 fans who had travelled to Leipzig had made ape noises.

This is not an isolated incident. In March of this year, Ogungbure was spat at, yelled at and eventually attacked by fans of the same team, Hallesche FC, who made monkey noises after the two teams played to a draw. Ogungbure retaliated by raising two fingers to his mouth to resemble a Hitler moustache and giving the Nazi salute.

Making the Hitler salute is forbidden in Germany and prosecutors launched an investigation against Ogungbure for making an "unconstitutional gesture." The probe was swiftly dropped in the wake of a nationwide chorus of support for the player, who had only been responding to intense provocation.

Sunday's incident came to the attention of the Germany's national football federation DFB, whose president Theo Zwanziger rang up to obtain more information about what happened, according to Christopher Zenker, who co-founded the anti-racism campaign "We are Ade" after the March incident.

But DFB spokesman Harald Stenger told SPIEGEL ONLINE that it's up to the regional governing body to decide whether to fine the club for the behavior of its fans.

It's unclear whether Hallesche FC will be fined. Zenker said it was high time that tough new rules by football's governing body FIFA to combat racism in the game were implemented. New anti-racism measures from Fifa call for match suspensions, points deductions and disqualification from competitions if fans engage in racist abuse.

Hallesche FC's fans haven't been the only offenders this season. Racist jeers during a match between first division Alemannia Aachen and Borussia Mönchengladbach resulted in record-high penalties levelled by the DFB (€50.000 and €19.000 respectively).

And FC Hansa Rostock was fined €20,000 after supporters made racist taunts against German national player Gerald Asamoah during an encounter between Hansa's B team and Schalke 04 in September.