Etidal Sinati's life in poverty began one night in March 2003. Israeli helicopters were flying air attacks on the Jabalia refugee camp in northern Gaza City and Etidal's husband Mohammed and a group of other men from the neighborhood went out to assess the damage. But the Israelis weren't done; an attack helicopter returned and fired on the onlookers. Etidal's husband was killed, leaving her with seven children and no one to provide for them. Overnight, the Sinatis became a welfare case -- and loyal to Hamas. The radical Islamist group took the destitute family under its wing.

"My husband was not a Hamas supporter. In fact, he was for Fatah," says Sinati, now a widow. It is cold in her two-room hut; a mentally ill uncle sits in a corner occasionally laughing to himself and pulling his wool blanket over his head. "But without Hamas we wouldn't have survived, and even with their support it's been difficult."

The official pension for the wife of a "martyr" -- a Palestinian killed by the Israeli military -- is €100 every three months. For a large family living in Gaza, this is about enough for one good seafood meal, but is not enough to live on. "So Hamas adopted my children," says Etidal Sinati. The widow receives €15 a month in child support for each child, and all of her children attend a school run by Hamas free of charge. "I voted for the crescent in the January election," says the illiterate Etidal. The crescent moon is Hamas's symbol.

A party for the poor

At first glance Hamas, a party that looks after the poor with its money and charity, appears to be playing a well-known tune on the instrument of populism. On the other hand, every major international aid organization is singing the Islamist group's praises when it comes to the quality of its work. "In the International Crisis Group's 2003 report, the most important American NGOs gave perfect marks to Hamas's work; they couldn't have achieved a better result," says Helga Baumgarten, a lecturer at Birzeit University in Ramallah.

Baumgarten believes that the success of the party, which emerged from the radical Muslim Brotherhood in 1987, is based on two factors: the highly professional work of the group's welfare agencies and Hamas's oft-cited integrity. "In fact, all studies have concluded that Hamas operates without a trace of corruption," says Baumgarten. "This has enabled it to gain the respect of the population over the years."

Nevertheless, Hamas is no moderate party. It sees itself as the spearhead of Palestinian resistance against the Israeli occupation. Following its surprising election victory in January, the organization refused to renounce armed conflict or to recognize Israel. Its repeated use of suicide bombings against Israeli citizens since its founding has also contributed to Hamas being classified as a terrorist organization in the West -- despite its day-to-day charitable activities.

But it is difficult to say whether Hamas deliberately uses its charitable work to generate sympathy within the population. "Social commitment is not a means to an end; I would not interpret this merely as exploitation," says Baumgarten. And even if it were, parties the world over operate no differently.

Al-Mujamma al-Islami, or the Islamic Center, in southeastern Gaza City is proof positive that Hamas literally builds on faith. The mosque on the ground floor of the newly constructed center has been in operation for weeks, while the center's employees sit between boxes on the fourth floor above the women's gallery in the prayer room. The center, founded in 1973 by Sheikh Ahmed Yassin making it the oldest Islamic charity in Gaza, had grown too big for its old headquarters. Its 150 employees just moved in to their new offices on the weekend.

At first the wheelchair-bound Yassin, who founded Hamas in 1987 and was killed in a targeted Israeli missile attack in 2004, managed the organization's funds from the living room of his modest house a few streets away. Today the center has evolved into a giant charitable institution in Gaza, operating 16 kindergartens, 30 Koran schools, and providing thousands of families with money, food and clothing. The center also pays child support for 5,000 orphans. Etidal Sinati also collects aid payment for her seven children here.

Nidal Shabana, the center's director, currently manages an annual budget of about $1 million. Despite his prominent position, Shabana remains a modest man, although a hint of pride for his work trickles through when he talks about the Islamic ping-pong team that recently won the Gaza championships under his tutelage. "Modesty and honesty are principles that are especially valued in Islam," he says. When asked his opinion about the growing strength of Islamist parties in the Arab world -- a phenomenon viewed with great concern in the West -- Shabana becomes circumspect. The behavior of Islamic leaders happens to be exemplary, he says, adding that their hands are clean. In a roundabout way, Shabana is saying that he considers the political leaders in neighboring Arab states to be corrupt and morally weak. 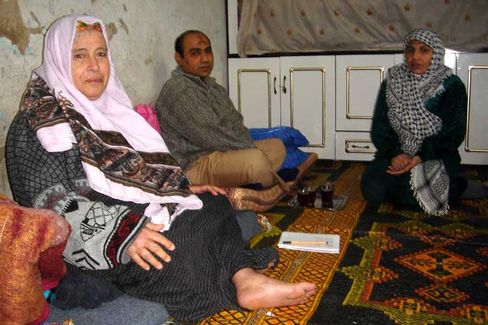 Etidal Sitani with her stepmother on the left and a friend of the family in the middle.

Since the 1970s, the failure of authoritarian regimes in the Arab world -- dominated by ruling families intent on lining their own pocketbooks and bloated, inefficient bureaucracies -- has led to Islamist groups filling a social and political vacuum in the Palestinian Territories, Lebanon, Egypt and Jordan. The fact that Hamas hasn't received recognition as the sole governing party in the Palestinian Territories is by no means just a local quirk. Resistance to Hezbollah's quest for power up the road in Beirut is similar. These religious fundamentalist organizations are a threat to the region's established regimes; it's not just Israel and its Western allies that are interested in keeping the Islamists in check.

Etidal Sitani is also aware that the organization that has thrown her family a lifeline is facing pressure from within the Palestinian Territories and from abroad. But this has only strengthened Sitani's support for her benefactors. Her eldest son recently tried on his father's uniform. But while the father was a reservist in one of the Fatah Movement's security forces, the son plans to fight for Hamas. "I will not allow him to join the militias just yet. After all, he is only 15," says the mother. "He can do it when he is 20."