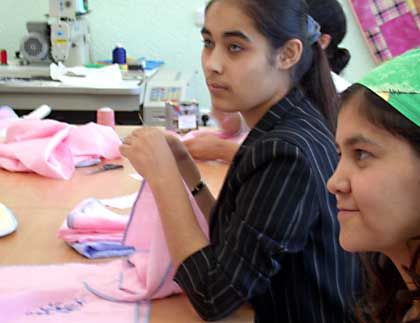 Sladria, 17, and her family could soon find themselves living in a radioactive area.

Sladria lost her homeland when she was seven. She fled war-torn Afghanistan with her parents and six brothers and sisters, with the aim of coming to the West. After first reaching Kazakhstan, they headed towards Europe. But where they actually ended up was Belarus. That may be Europe geographically speaking, but not politically. "We can't get to the West," says Sladria, who is now 17 years old. The borders to the new EU member states of Poland, Latvia and Lithuania are closed, she explains.

Sladria works in a facility for children of migrants in Minsk. Together with other children, the young girl embroiders tablecloths and oven gloves in return for a little bit of pocket money. Her parents have no time for her, as both have to work in order to provide for the seven children. Sometimes, Sladria says when the state-hired supervisor is out of earshot, people call her names and curse her because of her dark skin color. In the capital of Belarus, some here argue, there is no space for foreigners -- and people like Sladria are unwanted.

According to the wishes of the Belarussian dictator Alexander Lukashenko, more than 200,000 refugees will soon be removed from cities like Minsk, Brest and Grodno. Their new home will be a place in which not even the poorest Belarussians would want to live.

Lukashenko wants to settle 22,000 immigrants in the area around Gomel. They will be able to live in the places abandoned by the population who once lived there. And straightaway they would receive asylum status, which would formally grant them the same rights as Belarussians.

But the real reason for this new conciliatory tone has nothing to do with looking after minority interests. Gomel is about 130 kilometers north of Chernobyl and is one of the areas most affected by radiation after the nuclear reactor disaster of 1986. With this new settlement policy Lukashenko wants to transform the contaminated area into a region of economic prosperity.

Radiation scientists are appalled by Lukashenko's latest deal. "From a medical point of view this policy is insane," said Sebastian Pflugbeil, president of the German Society for Radiation Protection. Pflugbeil knows the area around Gomel and, with other scientists, has been involved in work in the region since the 1990s.

Belarus is thought to be the country which was most affected by the Chernobyl catastrophe. The wind carried about 70 percent of the radioactive emissions from the reactor meltdown across Belarus. "Children in the area around Gomel are 55 times more likely to suffer from thyroid cancer than the average. For adults the risk is five to six times higher," said Pflugbeil.

As things stand, the World Health Organization already predicts that one in three of the young people who were no older than four years old in 1986 will at some point in their lives suffer from thyroid cancer. Nevertheless, Pflugbeil has observed that, during the past few years, more and more people are settling in the region around Gomel.

"People move there because they are left in peace," he said. "Another reason is they can choose the nicest of all the empty houses." The once prohibited zone is especially popular among impoverished veterans of the wars in Afghanistan and Chechnya. Now, Lukashenko is exploiting these people and others like them in an effort to give a boost to the devastated area with his new settlement policy. "Lukashenko wants to draw a line under the Chernobyl catastrophe and allow the area to regain its economic value." The government is especially keen to get the agricultural sector back on its feet again. Berries and mushrooms, which absorb radiation especially well, flourish here. Pflugbeil's criticism is that the Belarussian authorities are trying to play down the impact of the radiation. In fact the effects of the radiation are being felt much longer than originally thought. "It's criminal," says the president of the German Society for Radiation Protection. 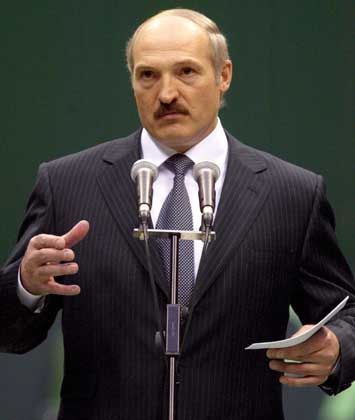 Belarussian President Alexander Lukashenko wants to revive the economy of the area near Chernobyl by settling refugees here.

2 million illegal immigrants wait to get in

Originally, Lukashenko wanted to wave refugees like Sladria's family straight on through to the European Union. Afghans, Pakistanis and Vietnamese -- in Lukashenko's eyes all nuclear-weapon armed criminals -- should go to the West. In the dictator's eyes this would be a possible revenge for the EU's refusal to nurture political relations with him.

Meanwhile, the EU is preparing to defend itself against a flood from the east. According to a report by the German intelligence agency this year, up to 2 million illegal immigrants are waiting to travel West in the "black triangle" -- the area between Moscow, Kiev and Minsk. In 2003, the EU allocated €400 million for efforts to increase security at its outermost borders. A new agency for protection of the outer frontier has also been set up.

Belarus plays a particular role in the EU plans. According to the United Nations High Commissioner for Refugees (UNHCR), every year 40,000 people pass through Belarus as they try to get to the West. At 1,128 kilometers, the former Soviet republic's border with the EU is the longest frontier to the expanded Union. That is why the UN and the EU invest €5 million in border controls. There are watchdogs on the border crossings, and a computer system to track illegal immigrants is about to be set up.

But none of that helps the refugees, who find themselves trapped on the other side of the border in a country that doesn't want them. Throughout Belarus they get names shouted at them and are sometimes even beaten up. Outside of Gomel, nobody in Belarus seems willing to allow them to make a home here.

It's a bitter situation -- one that Pflugbeil addresses with gallow's humor. "The region around Gomel is certainly very beautiful," he said. "Just as long as you don't have a Geiger counter."