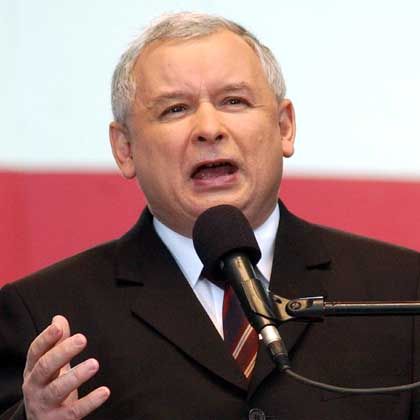 Poland has threatened to renegotiate a treaty concerning its border with Germany in an angry response to a compensation claim by a group of Germans expelled from Poland after World War II.

Asked if she was referring to a possible renegotiation of the German-Polish border agreement of 1990, she told Polish radio: "Yes, precisely that." The agreement confirmed earlier pacts that identified the rivers Oder and Neisse as forming the final border between the two countries and contained pledges from both sides to refrain from any further territorial claims.

Fotyga pointed out that for the agreement to be changed both sides would have to take a decision to that effect.

The claims by Prussian Trust and Fotyga's comment have put further strain on Polish-German relations which have deteriorated since the nationalist conservative government led by the twin brothers Jaroslaw and Lech Kaczynski -- prime minister and president respectively -- came to power last year.

Demands by German expellee groups for compensation and a memorial to their suffering has long weighed on ties between the two countries. The Poles, who suffered almost 6 million dead during World War II, among them 3 million Jewish Holocaust deaths, are incensed at the suggestion that Germans too were victims.

Kaczynski said the compensation claim by Prussian Trust was a "serious problem" and required a "lightning fast reaction."

"There must be a clear statement that Poland will refuse to recognize any rulings that clash with Polish law in this respect," he told Polish radio.

The two governments had recently discussed compensation claims. "But there is total stubbornness in this respect. The Germans are refusing to agree to any decision that might lead to claims being directed at the German government."

He said it had been a mistake not to enshrine in the 1990 agreement that any compensation claims were to be treated as an internal matter for Germany, Kaczynski said.

Meanwhile the president of Germany's upper legislative chamber, the Bundesrat, Harald Ringstorff, said during a visit to Poland that the Prussian Trust claims should not be taken too seriously.

No serious politician in Germany supported the lawsuit, said Ringstorff after a meeting with Polish Senate President Bogdan Boruszewicz. But he added that the German government had no legal means to stop the private lawsuit.

"This problem cannot overshadow the good relations that have been built up between Germany and Poland," said Ringstorff.