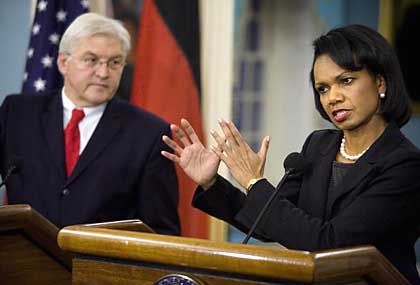 The Iraq Study Group may have recommended in its keenly-anticipated report that the US engage in dialogue with Iran and Syria to try to stabilize Iraq, but it appears the White House is not willing to swallow this bitter pill. US Secretary of State Condoleezza Rice has rejected the bipartisan panel's advice, saying that the two countries could demand too high a price for any help over Iraq.

In an interview with the Washington Post published Friday, she said that the "compensation" for any deal with the two regimes might be too high. Rice said she did not want to trade away Lebanese sovereignty to Syria, or allow Iran to obtain a nuclear weapon, as a price for peace in Iraq. "If they have an interest in a stable Iraq, they will do it anyway," she said. The Iraq Study Group, chaired by former Secretary of State James Baker and the former US Representative Lee Hamilton, urged talks with Damascus and Tehran as part of its key recommendations for dealing with the crisis in Iraq.

Rice acknowledged that it was unlikely that the country would be peaceful by the time President George W. Bush leaves office in two years' time, but hoped that Iraqis would "get to a place that is sustainable" by 2008. She said the goal was to help Iraqis marginalize extremists and support a moderate middle. "The solutions to what is happening in Iraq lie in Baghdad, in their ability to deal with their own political differences," she added.

Events since the US invasion of Iraq in 2003 do not appear to have diminished the White House's determination to spread democracy in the Middle East. Rice argued that the region is being rearranged in way that provides the US with new opportunities, saying, "This is a time for pushing and consulting and pressing and seeing what we can do to take advantage of this new strategic context."

She also reiterated her commitment to pursuing peace between the Palestinians and Israelis. "Get ready. We are going to the Middle East a lot," she said.