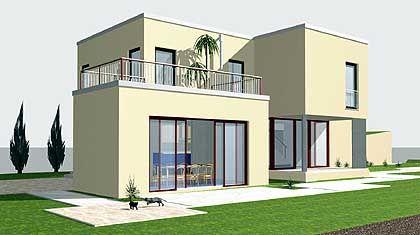 A model of the new house near Berlin made entirely of recycled concrete slabs from demolished communist housing projects.

It sounded like a good idea at the time. Modern housing for everybody complete with running water, gas stoves and heating year round. And for millions of people living in Eastern Europe after the Iron Curtain sprang up following World War II, that part of the communist dream at least was realized. Pre-fab concrete towers sprouted up on the outskirts and in the centers of thousands of towns and cities across the Soviet Union, Central Europe and East Germany, providing the proletariat with modern apartments they could only have dreamed of in earlier days.

Fast forward a few decades and the apartment blocks are still standing, but they are no longer the dream structures they once were. Now, rather, they are seen as a gray, hideously ugly blight on the urban landscape. And, in Eastern Germany at least, they are being torn down en masse. But what to do with the still-healthy concrete slabs that were slapped together to create the housing projects? It was a question that has been bothering one Berlin architect for years. He recently came up with his own solution. He has begun building modern, albeit a tad boxy single-family homes using the pre-fab chunks. The first one is now finished and more are on the way. 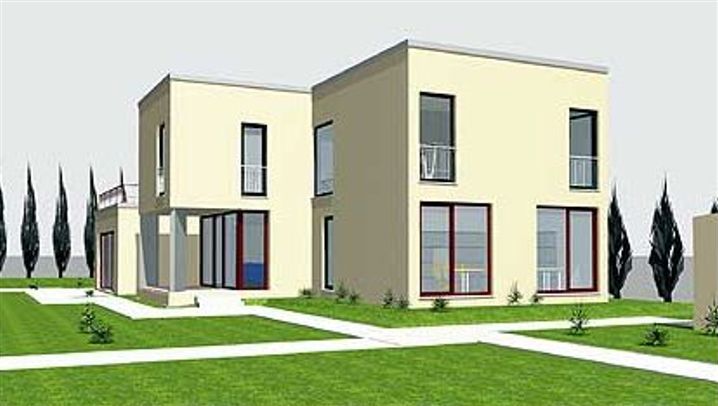 "We have been experiencing a really high demand for these houses," says Joel Biele from the architectural firm Conclus which is designing the new structures. "Our Web site dedicated to the new houses is visited frequently and it has been generating a number of inquiries. We can't even keep up with the demand."

In other words, having spent the 1990s moving out of concrete block houses as quickly as possible, many Eastern Germans are now weighing whether to move back in.

Yet these new homes are nothing like their communist cousins. Indeed, there is quite a bit more Frank Lloyd Wright in their design than there is Hermann Henselmann, the well-known former architect-in-chief of East Berlin and designer of the oppressive Karl-Marx Allee -- a monument to Stalin's beloved wedding cake architecture. The charming little house that has sprung up in the pine forests in Mehrow near Berlin, for example, comes complete with a sun room and a perfectly square terrace perched atop the ground floor. While the boxy concrete structure has -- in contrast to Wright's "Usonian" structures from the 1930s -- two stories, the clean lines and large windows speak of generous openness and a relaxed, almost summer house feel.

The innovative new homes come at a time when Eastern Germany is mired in a phase described perfectly by that uniquely German word "Rückbau." The word means, "building backwards." And with over 1 million empty apartments -- most of them in depressing-looking concrete towers -- across Eastern Germany, there is a lot of building backwards to be done. Indeed, the German government program "City Reconstruction East" is currently planning to tear down 350,000 empty flats by 2009 as part of a 2.5 billion plan to help cities of former East Germany to adapt to shrinking populations and overbuilt city centers.

And the population is continuing to shrink. Since reunification in 1990, eastern Germany has lost 10 percent of its population due to low birth rates and -- because of an ongoing economic crisis that translates to 18.6 percent of Eastern Germans being unemployed -- millions of young people heading west for jobs. Indeed, traffic on Sunday evenings on westbound Autobahns can be horrendous as secretaries, trainees and even industrial workers stream toward their posts in western Germany.

All of which translates into an endless supply of building material for Biele. The only problem, however, has been convincing the demolition companies dismantling the East Bloc monstrosities to be gentle with the six ton, three by six meter (10 by 20 feet) slabs. "The demolition companies kept destroying the plates because they weren't careful enough to stack them on wooden supports or they just heaped them on top of one another," Claus Asam, a construction engineer at Berlin's technical university who developed the concept of recycling the communist housing projects, told the Süddeutsche Zeitung.

The idea of recycling the east German apartment buildings is not a new one. A research team in the Eastern German town of Cottbus built a first pilot model in 2001 before demolition had really gotten under way. But the result was almost just as much of an eyesore as the originals. "It looked like a shrunken block house," said Joel Biele's brother Herve, who designed the new house in Mehrow. The engineers had essentially just taken the parts available to them and put them back together in a new, miniature configuration.

That, though, is not a mistake that the Biele brothers are repeating this time around. Not a single concrete slab used in the new houses goes unmodified. Excessive creativity, however, is not possible given the building materials. "One has to settle on a clear, austere design," Herve Biele told the Süddeutsche. "Squiggly and angular architecture would be difficult." Nevertheless, the result in Mehrow is an immensely livable 213 square meter (2,300 square foot) house for the bargain basement price of around 175,000.

Transportation costs are huge because of the weight of the concrete. And so far, says Joel, even considering the low building costs, the houses are only financially realistic within a 300-kilometer radius of the hulking apartment blocks being demolished. Still, in addition to the new houses now planned for the Berlin area, the architects are now planning a project near Frankfurt in western Germany and are hoping to be able to build before year's end.

Now maybe all those eastern German workers heading west might end up living in block houses after all.