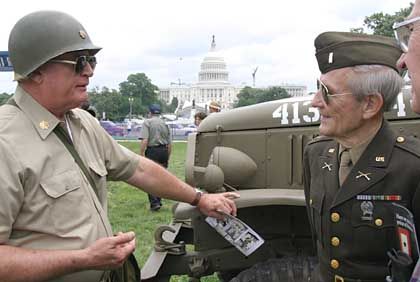 US war veterans look back to their time serving in Germany

When 27-year-old Wolfgang F. Robinow, lieutenant in the United States Army, received his orders early in the morning on April 30, 1945, he didn't know it was going to turn into almost the perfect day to be an American soldier. After all, his orders were clear: He and his men were to enter the southern German city of Munich - the city where Adolf Hitler and the Nazi party had gotten started - and determine just how fiercely the Germans intended to defend it.

In other words, he and his reconnaissance regiment were being asked to creep through a ruined city, picking their way down the rubble-filled streets, and impersonate the proverbial sitting duck. And his only defense was a handful of jeeps - their floors covered with sandbags as an often ineffective protection against mines - armed with a mounted heavy machine gun welded into each. The enemy soldiers, Robinow was acutely aware, had only to sit and wait for their quarry. They could be anywhere.

"Every morning," Robinow, now 87, and a resident of the German city of Frankfurt, realls "I got the same order. 'Go forward until you meet resistance.' It got pretty hairy sometimes."

Exactly sixty years later, memories of that day in Munich are still vivid for Robinow. Healthy and active despite difficulties hearing, he still has no problem recalling the myriad details that made up that day: the names of many of his 21 soldiers, the appearance of buildings on the way into Munich, even the exact route he and his soldiers took as they advanced in from the west. But then, the route should be easy to remember. After all, Robinow, born in the northern German city of Hamburg in 1918, lived in the city for four decades following the war.

On that day in late April, though, Munich was still just enemy territory for Robinow - and potentially deadly. A mere four months after the desperate German counterattack known as the Battle of the Bulge - and just one day after soldiers from Robinow's 42nd Division had liberated the Nazi concentration camp of Dachau just outside of Munich - it was unclear what was in store for his unit on that clear, sunny day. The streets, though, were virtually deserted. And by early afternoon, after inching their way around countless ruined buildings and stopping just before each intersection, Robinow became the first American soldier to stand on Munich's newly liberated central square, Marienplatz.

"You have to imagine it was pretty slow going," he says. "Even if we didn't see anybody at all, we never knew what was hiding around the next corner. We didn't have any dogs or tanks or anything like that. Just the jeeps. My soldiers had rifles. I had a pistol. That was it."

By the time Robinow and the rest of the United States army had advanced to the city named affectionately by Hitler as the "Capital of the Movement," Hitler's empire was in an advanced state of decay. Much of western Germany was already in the hands of British and American troops - Robinow himself had been on hand for the taking of Wolfsburg where Volkswagen still has its headquarters - and the Soviets had advanced all the way into central Berlin and were laying siege to the German parliament building, the Reichstag. By the end of the day, Adolf Hitler, who had remained in his bunker in central Berlin for much of the preceding month, would be dead, having taken a cyanide tablet and shot himself in the head.

Yet while for most of the American troops, the march through Germany was an advance through a foreign land, for Lietenant Robinow, it was a sort of homecoming. The youngest of six children, Lieutenant Robinow was born to a family that had lived in Hamburg for over 300 years. Soon after he was born, Robinow's family moved to Berlin where he was raised as a protestant. It was only at the age of 14, when Hitler came to power in January 1933, that Robinow learned his family's true ethnic background.

"I was in the German version of the Boy Scouts," he explains. "One day, the troop leader gathered us together told us that from that day on we were going to be called Hitler Youth. We just needed to go home to our parents and tell them we needed proof that we were Aryans. Well I hadn't ever heard the word before and wrote it down carefully. It was when I showed it to my parents that night that I learned that I had four Jewish grandparents."

He had to leave the Hitler Youth the next day. "I felt like a kid that was punished for something I didn't do."

It wasn't long before Robinow moved to Denmark and then, in 1938, a sibling already in the United States was able to arrange for him to emigrate to Pennsylvania. It was there, while studying English on the campus of Swarthmore that he had his first contact with his Jewish roots. His roommate was a Jew from Berlin.

"I didn't know a thing about Jewish culture," he says. "My roommate took me home with him a number of times and that's how I learned what gefillte fisch was."

Robinow soon decided to enter the US military and, having been turned down from the air force because he was German, he ended up in the army and was posted to the island of Bermuda in 1941 to help guard an airstrip. When the Allies began preparing for occupying Germany, however, Robinow was recalled from Bermuda and retrained to interrogate German prisoners of war and Nazi functionaries because of his fluency in the language. In January 1945, he returned to Germany as a US soldier.

Munich was to be the last serious action he would see in World War II. And as he and his troops began approaching the center of the city, they began seeing more and more people - by 2:00 in the afternoon, they were standing in the middle of a small crowd of people on the central square of Marienplatz.

"On Marienplatz there was a bunch of people," Robinow says. "Really quite a few. Most of them were made up of very old people who were too old for the Volkssturm (a last line of defense made up of old men and young boys). We were greeted as the great liberators of the city, which, to be honest, really made me angry at the time. This was, after all, the capital of the movement. It was where the Nazi party got its start and where its main propaganda organ the newspaper the Volkischer Beobachter was headquartered. And they were now happy to be 'liberated?'"

It was just on the other side of Marienplatz that Robinow encountered his first armed Germans. Having noticed a police station, he marched inside in full battle gear to confiscate their weapons. Prepared for the worst, he was surprised to be greeted with military salutes - and to find the weapons already boxed up and prepared to be taken away.

"And if you can imagine - German efficiency - on each pistol there were two tags," Robinow recalls laughing. "On one of them was the number of the pistol and on the other was the number of the officer who had been issued the pistol. Before I could take them though, the man insisted on my giving him a receipt. So he got me some paper and a pen and I wrote him out a receipt and wrote something like, 'received this day the 30th of April, 1945, 102 pistols. Signed John Doe. First Lieutenant Infantry US Army' or whatever came into my head. His grandchildren have probably put it in a frame and it is hanging in some living room somewhere."

By the end of the day, Robinow and the US soldiers who followed had almost completely taken Munich. Some shots were fired shortly after occupying the city center - and a pitched battle was fought the next day at the Munich airport - but for the most part, Robinow says, the city was left undefended. He finished the day in a villa he and his men liberated along with a full wet bar.

The rest of the war for him consisted, as he explains, of chasing German women and interrogating German prisoners. Not only was he involved in interrogating, by his own estimate, upwards of 700 Germans, he was also involved in the arrest of Dachau doctors, SS leaders and, a story he relishes in telling, the filmmaker Leni Riefenstahl ("because the commanding officer wanted her autograph.") He also recalls with disgust his encounter with one Gestapo officer who he asked how many people he had killed. His response as Robinow remembers it: "Are you in the habit of counting the number of slices of bread you have for breakfast in a year?"

But it was his experience of taking Munich that stuck with him the longest. Indeed, in 1961, he moved back to the city for work and only left two years ago to be closer to his children and grandchildren in Frankfurt. And, he says, despite the experience of being forced out of Germany by the Nazis - and even though an aunt, uncle and cousin were all gassed in Auschwitz - he feels comfortable in his homeland. And in any case it is a much different place from his teenage years.

"At that time," he recalls bitterly of the late 1930s, "I wasn't allowed to do anything except to breathe."