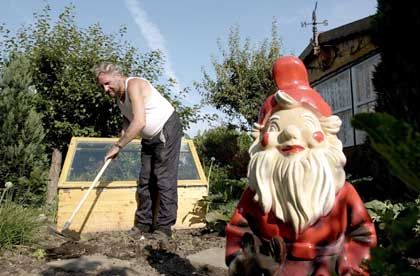 A man, his garden gnome and a 9-page-thick law dictating just how his garden should be kept.

You're zipping along in an ICE high-speed train heading from one World Cup host city to the next, munching happily away on your fat-drenched mini-sausages fresh out of the dining car microwave. Just as you're wiping the last blob of mustard from the corner of your mouth, a garbled announcement indicating an approaching stop warbles through the loudspeaker. A lazy glance out the window, though, comes as a shock. Rather than the well-ordered suburbs or well-kept factories you have come to expect, the image is more that of a luxury version of a South Asian slum -- miniature houses tucked in next to the train tracks as far as the eye can see.

It's a sight that greets visitors on the approach to almost every city in Germany -- and the tiny little structures are not, of course, slums. A second glance reveals that, beyond the clutter of ladders and rakes leaning against the back of the structures, neatly ordered flowerbeds, well-tended fruit trees and picture-perfect picket fences are lined up like regiments of tin soldiers. The phenomenon is known as a Schrebergarten -- an area outside the city where the gardening-obsessed Germans can rent out a small plot and plunge their fingers into the soil.

But while getting back to nature is an instinct many of us indulge in, the German gardener takes it very seriously indeed. Flawlessly clipped lawns, neatly sculpted bushes, and flowerbeds entirely free of even the tiniest weed are the norm with many gardens revealing a feng shui exactness that would put a Japanese bonsai master to shame. Other vegetation virtuosos prefer a more playful perfection and opt for a liberal distribution of garden gnomes and plastic windmills with cheap replicas of Greek fountains and other water features a must for those with a bit of cash to burn.

What looks like a slice of outdoor freedom -- or free-form nature kitsch -- though, is actually far from it. In 1983, the German government passed the Bundeskleingartengesetz ("Federal Small Garden Law"), which regulates just how big a small garden is allowed to be and includes nine further pages describing, in German legaleze, every other aspect of what the "Schreber-gardener" is faced with. In addition, each colony has a formal leadership structure and a book of rules that regulates everything from the exact dimensions, color and style of the shack to when one is allowed to mow the lawn or use other noisy gardening machinery. Unkempt gardens are also frowned upon.

The Schrebergarten phenomenon is not a new one. Dr. Daniel Gottlieb Moritz Schreber, a 19th century naturopath, wanted to create more athletic fields for the children in his home city of Leipzig. He died in 1861 before the plan could be realized, but his son-in-law got the ball rolling in 1864 and before long, small vegetable plots were planted in the fields as well to teach the children the basics of gardening. The idea quickly took off. But it was during World War I and World War II that the gardens rapidly rose in importance as sources of otherwise hard-to-get fresh fruit and vegetables. Furthermore, after World War II ended, a lack of housing across the country resulted in the common practice of erecting small structures on the plots so that families could find shelter.

The result today are thousands of garden colonies on the outskirts of big cities in Germany, Austria and Switzerland that look more like miniature housing developments than peaceful nature retreats. For the most part, the colonies are no longer residential, but in the summertime, they are packed with families enjoying the sunshine, crammed onto their tiny plots grilling, eating and relaxing. A perfectly idyllic scene on the shores of Walden Pond -- at least until the next ICE rockets by.