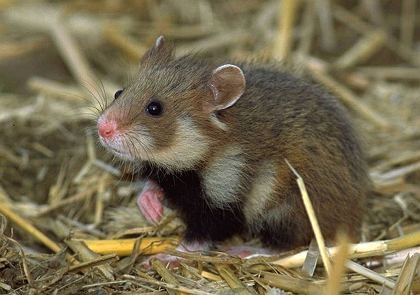 European hamsters are larger than the breeds of hamster normally sold as pets.

This week, officials cleared the final bureaucratic hurdles for a pair of field hamsters from France immigrate to a region of the German countryside around Berlin where their kind had gone extinct. Biologists hope the population of European, or black-bellied hamsters, which used to be common from Belgium to the steppes of western China, will rebound in Germany.

Previously, the hamsters were kept at the Heidelberg Zoo in western Germany, but on Thursday they were to be released in the Prignitz district of the the eastern German state of Brandenburg, where the species had disappeared.

They won't live in the wild, but at a "hamster protection station," where they're expected to breed and establish a new German community of European hamsters. The European Commission reprimanded Germany in 2001 for letting farms and development threaten the hamsters' natural habitat.

The hamster population is one indicator of a countryside's health, according to Rudolf Scholz, head of the local Forest Protection Service. He told the Märkische Allgemeine newspaper that the last European hamster to be seen in Prignitz was in 1986. Before then the animal was common in eastern Germany, indeed there were millions, but industrialization of farms under Communism took its toll.

European hamsters (cricetus cricetus) can grow up to 32cm (12 inches) long, bringing them closer to the size of guinea pigs than the hamsters normally sold as pets. They also have large cheek pouches, which they fill with air while they swim.