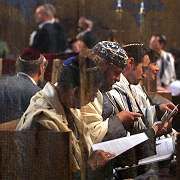 Participants at the ordination of three rabbis in Dresden's New Synagogue.

Three rabbis were ordained in Dresden on Thursday in a ceremony that was broadcast on live TV and hailed by German President Horst Köhler as "a very special occasion indeed."

Daniel Alter, a 47-year-old German, was the first of three men graduating from Potsdam's Abraham Geiger College to be ordained in Dresden's New Synagogue. He was joined by 35-year-old Thomas Cucera, of the Czech republic, and 38-year-old Malcolm Matitiani of South Africa.

They were the first rabbis to be ordained in Germany since the Nazis destroyed the College of Jewish Studies in Berlin in 1942.

Matitani told the Associated Press the ordination was important to him "because of the scholarship and the symbol of reviving Judaism in Germany  It's the birthplace of progressive Judaism and it has a long history of Jewish scholarship."

Matitani will return to South Africa and serve as a rabbi in Cape Town. Alter and Kucera will remain in Germany.

The Abraham Geiger College opened in 1999 to serve a growing German Jewish community. It's named after a liberal rabbi considered the founder of the progressive Reform movement. The school is located in Potsdam, outside Berlin, but the ordinations took place in Dresden's rebuilt New Synagogue -- the first Jewish temple to open in the former east since World War II.

The German Jewish community has more than tripled since reunification in 1990, thanks in large part to a government program to welcome Jews from the former Soviet Union. More than 100,000 Jews live in Germany now, still a fraction of the some 600,000 who lived here before 1933, when the Nazis came to power. The Nazis exterminated about 6 million Jews from all over Europe.

"After the Holocaust, many people could never have imagined that Jewish life in Germany could blossom again," wrote President Köhler in a congratulatory statement. Chancellor Angela Merkel added, "This is a moment of hope that these first rabbis to be ordained in Germany since 1942 will be followed by many more."