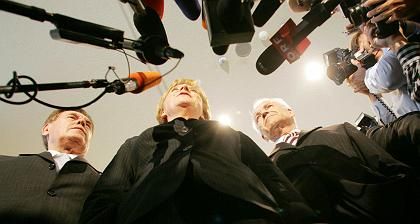 Angela Merkel is still taking center stage for the CDU. But for how much longer?

Everybody knows it's coming. Somebody is going to have to take the fall for the Christian Democrats (CDU) miserable showing in last Sunday's general elections -- and all signs point to party head and chancellor candidate Angela Merkel. Indeed, the knives to be used in the slaughter of this scapegoat are already being sharpened. According to Thursday's Süddeutsche Zeitung, the leader of the CDU's Bavarian sister party, Governor Edmund Stoiber has already begun blaming Merkel internally for "her cold and heartless rhetoric" used in the campaign.

But publicly, everybody on the right side of Germany's political spectrum is acting as though the 35.2 percent result for the combined CDU and Bavarian Christian Social Union (CDU/CSU) -- while perhaps a bit disappointing -- is really no big deal. On Tuesday, in fact, in the first meeting of the newly-elected CDU parliamentary group, Merkel was confirmed as the party's front woman with 98.64 percent of the votes cast.

But the ritual sacrifice is almost sure to come. After all, it's much easier to blame Merkel for the party's election debacle than it is to face the truth exposed on Sunday: The right side of the German political spectrum is in an unfocused freefall. And conservative Germany is a shambles.

How conservatism became a loser in Germany

For years now, German politicians have been telling voters that a bloated social welfare state is simply no longer feasible -- and surveys indicate that many Germans are prepared to tighten their belts. Yet last Sunday, 51.1 percent of the electorate cast their votes for left-of-center parties. Only 9.8 percent voted for classic conservatism in the form of the business-friendly Free Democratic Party (FDP) and a further 35.2 percent voted for the CDU/CSU, which, while it talked a tough economic game during the campaign, is hardly comparable with, say, the Republicans in the US. Conservatism, it seems, can't win in today's Germany. 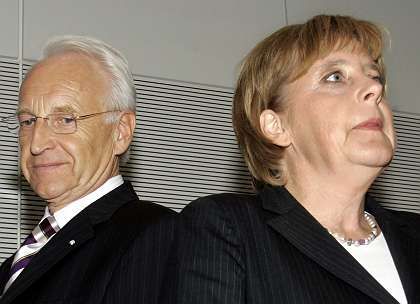 Much of the party's failure on Sunday can, of course, be chalked up to simple political mistakes made by Merkel and her campaign crew. The party, for example, had a perfectly serviceable tax plan -- the one famously sketched out on a beer coaster by former party finance guru Friedrich Merz. Why then, asks Alexander Gauland, a man the conservative paper Die Welt calls one of Germany's few conservative intellectuals, "would you introduce a man" -- Merkel's pre-election choice for finance minister Paul Kirchhof -- "who represents a totally different concept? The result is clearly that nobody knows what the message is."

What can be said of Merkel's tax policy though can also be said of the center-right in Germany as a whole: Nobody knows what the message is. Still in shock on Tuesday, Die Welt columnist Guido Heinen wrote, "It's not that the (CDU) has moved to the left, rather it has marched into programmatic imprecision. ... The CDU presented the people with a load of single-measure building materials. But they had no blueprint to go along with it." The center-left Süddeutsche Zeitung writes: "The (CDU) threw the refrigerator doors wide open and is now upset that the voters didn't find the resulting coldness attractive."

Germany has always had a different definition of political conservatism than the United States or Great Britain. As Gauland points out, the movement was almost fatally compromised when Weimar conservatives aligned themselves with the Nazis before World War II. "There has always been a problem," he says, "with redefining conservatism while at the same time staying away from this shameful past." And post-War Germany has made a clear decision in favor of a strong social net. The result is a conservatism that doesn't have a knee-jerk revulsion to "big government" as do conservative Republicans and interest in neo-liberalism is relatively limited.

As CDU heavy-hitter Wolfgang Schäuble wrote in a 2002 document he titled "A German Conservative Credo," "We are skeptical about unfettered individualism because of our awareness of man's sins, but also because of our profound awareness of the historical defects and aberrations in Germany's 20th century history."

But even the watered-down right proved too strong for German voters on Sunday. Fifteen years after the "Unity Chancellor" Helmut Kohl was re-elected in the German equivalent of a landslide (his CDU together with coalition partner the Free Democrats) with 55 percent of the vote, the same two parties on Sunday barely managed 45 percent. Even at a time when the country is deeply skeptical of the Schröder government's ability to solve the country's unemployment, debt and economic growth problems, a CDU party seen by many as more economically proficient is simply unelectable.

"The CDU failed," says Gauland, "because it adopted too many neo-liberal positions that are not well received in society. There was an impression that the CDU is no longer socially just."

Part of the problem lies with their political opponents over in Gerhard Schröder's Social Democrats (SPD). The party of unions and the working class pulled a Clinton during Schröder's second administration and swooped in on Germany's political center. In an attempt to put Germany's cradle-to-the-grave social system on a diet, Schröder introduced a package of reforms called Agenda 2010 and unemployment benefit cuts awkwardly called "Hartz IV." Even if the reforms were desperately unpopular among his own constituency -- many of whom jumped ship over the port rail and landed in the new Left Party -- they were passed for the most part with the support of the CDU. Mekel's party was thus left with little to campaign on except "we'll continue the reform thing but maybe do it a tiny bit differently in one or two areas."

What the party clearly didn't do, says Jeffrey Gedmin, leader of the Berlin branch of the conservative American think tank Aspen Institute, is provide a unified economic vision. "When it comes to economics," he asks, "where do so-called conservatives in Germany stand? Who represents German conservatism on economics? The message seems quite unfocused to me." 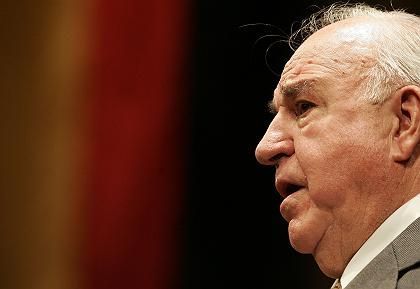 A further problem, say many, is the somewhat antiquated view of family and society offered up by Germany's center-right. Even if "Generation Golf" (a moniker that refers to the car rather than the game) saw young Germans ditching tie dyes for designer threads -- a trend that began in the 1990s but continues today -- a concurrent social conservatism a la American religious right never materialized. Even in 2002, the CDU had problems attracting women voters and did especially poorly in Germany's cities -- a problem the party has been able to ignore since then due to state-election successes that have seen voters punishing Schröder for his reform agenda.

But this election once again saw the CDU do poorly in heavily populated areas leading some to argue that the party's anti-immigration stance and opposition to Turkish EU membership -- a country where millions of Germans vacation every year -- no longer reflect the attitudes of a majority of Germans. And in a country that has been conditioned to shy away from anything that smells like xenophobia, the CDU's leading role in defining a German "Leitkultur" (predominant culture) and it's "Kinder statt Inder" (children instead of Indians) campaign against bringing in computer specialists from South Asia were seen by many as borderline racist. And that, partially hits at the core of the CDU's problem: its central tenets are aimed at a homogenous German society that may still exist in villages and small hamlets but has disappeared in the cities, which are magnets for immigrants, bastions of free-thinking intellectualism and, increasingly, cosmopolitan.

None of this is terribly new. German conservatives have long opposed immigration, been pro-industry and have recently come out strongly in favor of slimming down the welfare state. But there was always a larger vision to go along with it. Konrad Adenauer -- Germany's first postwar chancellor -- started the country on the road to democracy. Helmut Kohl battled communism at the side of Reagan and Bush.

Merkel? "Merkel and the CDU failed to convince voters that they have a vision," says Gedmin. Political scientist Franz Walter agrees. "Along with all of the economic and programmatic documents in the CDU, there is no well-developed chapter about values and worldview anymore," he wrote in an article for SPIEGEL ONLINE.

Which leads one back to Angela Merkel. Maybe she wasn't the right candidate to communicate exactly what the party's vision was. Either way, the party now beginning to develop a vision: That of a party without Merkel as leader.