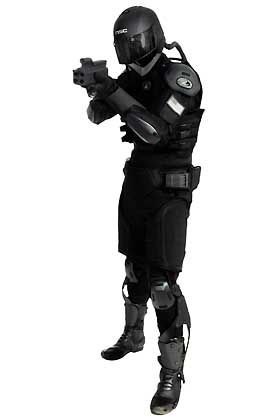 A US soldier of the future?

The Pentagon is hoping that a new type of suit will give its soldiers super-human powers. It would be made from a newly developed super-strong but super-lightweight fabric that could stop bullets and increase the soldiers muscle power up to a hundredfold.

The US military has long been searching for an "Exoskeleton" that would amplify the muscle strength of combat soldiers. However, up until now each attempt had been too inefficient, cumbersome or mechanical to be used.

Now the superpower's military is hoping to profit from the findings of nanotechnologist Ray Baughman from the University of Texas. He has managed to develop chemically grown nanotubes, which are like tiny muscles. The microscopically tiny particles contract when an electrical voltage is applied and get their energy from a mini fuel cell, that runs on hydrogen and oxygen. The mini muscles are a hundred times stronger than human muscle tissue -- and can be woven into a fabric that would contract when heated and go back to its original shape when cooled.

Newsweek reports that Baughman now has a grant from the Pentagon to develop an exoskeleton for the US army. It is hoped that a suit made out of this type of material could allow GIs to jump over high barriers and transport heavy objects quickly and over long distances. The soldiers would be protected by another nano product -- a bullet-proof carbon fabric that would be a lot lighter and much stronger than the current bullet-proof vests.