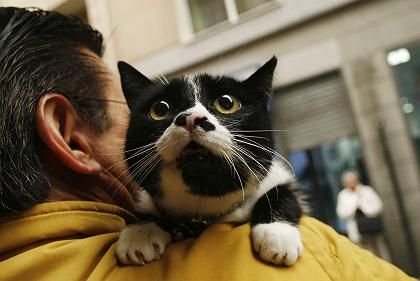 Off to the glove factory?

Residents of Berlin are being advised to lock up their cats amid rumors that they are being stolen and sold to fur traders and vivisectionists by ruthless cat snatchers driving vans with tinted windows.

The city's animal protection society said it has recently been getting calls from people in two districts of southwestern Berlin who think their cats might have been stolen by thieves. "People have noticed vans with dark windows," said Marcel Gäding, spokesman for the society. "One could assume that has something to do with it."

"You see a lot of women walking around town wearing coats with beautiful fur collars. In many cases it's synthetic fur but it's also often cat fur. Many people don't realize what they're wearing around their necks. For all they know it could be their own missing cat," said Gäding.

Gabriele Groh, who lives in the Grünau district of Berlin, told the Berliner Zeitung that three cats had vanished from her housing estate this month, including her own red-and-white tomcat Mecki. "That can't be a coincidence," she said, adding that the cat had been with her for eight years.

Is there a cat-snatching mafia out there supplying moggies to animal research laboratories and glovemakers in Germany, eastern Europe or Asia?

No, says Steffen Seckler, spokesman for Germany's national Animal Protection Society in Bonn. "There are rumors and we take them seriously. We've had countless calls from people asking about this but we think it's highly unlikely."

"Thousands of animals disappear each year and anything might have happened to them -- they could have been run over, shot by hunters, or got stuck somewhere they couldn't escape from."

In the western state of North Rhine-Westphalia alone, 17,895 cats were shot by hunters in the 2002/2003 season, and those are only the ones the region's hunting federation will admit to, said Seckler.

"We can't rule out organized theft but there's no evidence of it. Besides it just doesn't make sense to argue that cats are being caught for test laboratories which are far more likely to breed their own animals for the purpose.

"And I can't imagine cat catching being an economically feasible way to supply the clothing industry when thousands of animals are bred and processed in China and turned into jackets, trousers, shoes, and stuffed toys, which is the height of perversion," said Seckler.

Police in Munich launched an investigation into what it called "organized animal theft" two years ago but found no proof.

Importing cat and dog fur is quite legal in Germany but the European Commission in Brussels has drafted legislation to ban it throughout the European Union. Germany imports an estimated 250,000 to 500,000 cat furs per year, mostly from China and Korea. Campaigners claim around 2 million cats and dogs are slaughtered for their fur and skins in Asia each year.

In many cases customers don't know what they are buying as cat fur is often not identified, or labelled as something else such as rabbit fur.

Cats are used to make gloves and hats, coat and jacket linings. Their fur also adorns trousers and shoes, and is turned into "rheumatic blankets" and kidney warmers. Thousands of dog skins are also imported.

Breeders in Asia strangle their cats slowly to prevent damaging the fur, says the German Animal Protection Society. Southern Germany has a number of carnival associations that have uniform coats made of cat. Some carnival revellers even drape themselves in dead cats.

Seckler said cat owners can register their pets with his society free of charge and identify the animal with a tattoo or microchip. That could help trace them. Neutering them also helps because they're less prone to trot off to look for a mate.

But all bets are off if there are Satanists living in the area. Rumor has it that devil-worshippers like to sacrifice cats at black masses. They prefer black cats, however.