It's been a bad few days for former United States secretary of defense Donald Rumsfeld. First he had to fall on his sword after the Republicans lost control of Congress in last week's US mid-term elections. Now a coalition of human rights groups is taking him to court in Germany over alleged war crimes. 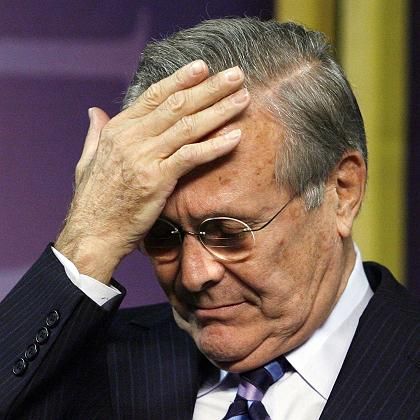 Another headache for former US secretary of defense Donald Rumsfeld

The coalition, led by the New York-based civil rights group Center for Constitutional Rights (CCR), filed a criminal complaint against Rumsfeld on Tuesday at the Federal Prosecutor's Office in Karlsruhe, Germany. The complaint calls on the prosecutor to investigate whether high-ranking US officials authorized war crimes in the context of the war on terror.

The complaint is being brought on behalf of 12 alleged torture victims, 11 of whom are Iraqi citizens who were held at the notorious Abu Ghraib prison in Baghdad. The twelfth man is Guantanamo detainee Mohammed al-Qahtani, a Saudi citizen identified by the US as a would-be participant in the 9/11 attacks and held at Guantanamo since January 2006.

After al-Qahtani did not respond to normal questioning, he was allegedly subjected to a regime of aggressive interrogation techniques, approved by Rumsfeld and known as the "First Special Interrogation Plan," which included severe sleep deprivation, forced nudity, and sexual and religious humiliation. Military investigators concluded in July 2005 that al-Qahtani had been subjected to abusive and degrading treatment, although the Pentagon denied he had been tortured.

More than a few bad apples

The human rights groups have not just set their sights on Rumsfeld, though. The suit names 11 other high-ranking US officials, including current US Attorney General Alberto Gonzales, former CIA director George Tenet, and Ricardo Sanchez, the former commander of all US forces in Iraq. They are all accused of either ordering, aiding, or failing to prevent war crimes.

"There crimes are not the work of a few bad apples," said CCR president Michael Ratner. "They were planned and executed at the highest levels of the US government."

CCR and its partner organizations filed a similar complaint in 2004, but it was dropped. They claim the US pressured Germany to drop the case, which was dismissed in February 2005 on the eve of a visit by Rumsfeld to Germany. At the time, then-federal prosecutor Kay Nehm said that there were no indications that the US authorities would "refrain from penal measures" regarding the violations described in the complaint. The activists believe that Nehm's successor, Monika Harms, who took office earlier this year, may be more amenable to their cause.

And they also feel they have more chance of success this time. One reason is new evidence such as documents from the 2005 Congressional hearings on the al-Qahtani case. Rumsfeld's resignation last week may also mean that prosecutors are under less political pressure to shun the case, the activists feel. His resignation also means he can no longer try to claim immunity as a sovereign official from international prosecution for war crimes.

And the human rights groups have an ace up their sleeve: Janis Karpinski, the former commander of Abu Ghraib, will appear as a witness on their behalf.

"Janis Karpinski is the witness," commented Kaleck. "The plaintiffs can and should testify (about) what happened to them, but on the other hand they cannot testify who ordered and enforced the interrogation methods, and who conducted them. You must have someone from the apparatus, and this is Janis Karpinski."

Karpinski , who resigned from the army in July 2005, wants to shed light on the incidents that ended her army career. "I served for 28 years," Karpinski told the Berlin daily Der Tagesspiegel. "I was entirely committed to the army. Then they make me into a scapegoat."

The case is being brought in Germany because under the country's 2002 Code of Crimes against International Law (CCIL), the German federal prosecutor is entitled to prosecute war criminals irrespective of the location of the defendant or plaintiff, the place where the crime was carried out or the nationality of the persons involved.

"In November 2004, we went to Germany because it was seen as a court of last resort, and in 2006 it still is," commented Berlin attorney Wolfgang Kaleck, who is representing the organizations. "There is simply no other place to go except to foreign domestic courts."

The case could not be brought to the International Criminal Court in The Hague because the US is not a member, Ratner said, adding that the case could also not be pursued through the United Nations because of the US's veto power.

"One of the goals has been to say a torturer is someone who cannot be given a safe haven," Ratner said. "It sends a strong message that this is not acceptable."

Ratner admitted it was unlikely that Rumsfeld would ever end up in a German prison. But even if German prosecutors fail to take up the case, Ratner feels renewed media attention to the issue of torture is an end in itself. "We have won a part of this case already," he said.

And even if Rumsfeld gets off again in Germany, Kaleck told the Tagesspiegel he is confident the former secretary of defense will get his comeuppance elsewhere: "If not today in Germany, then Rumsfeld will get problems tomorrow in Spain, or the next day in Sweden."