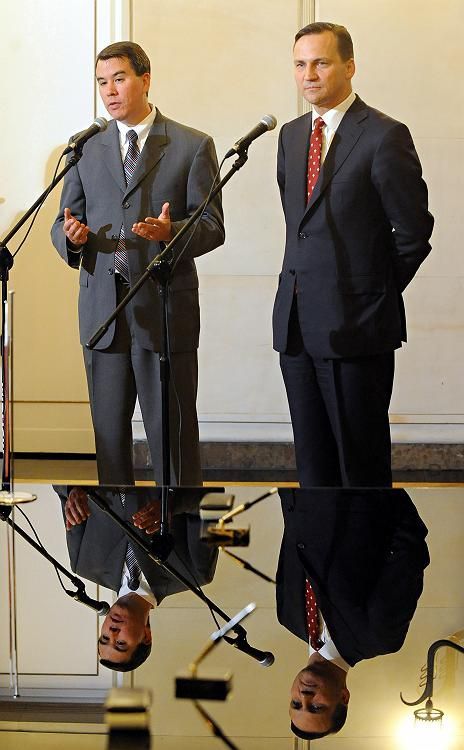 The United States and Poland reached a long-stalled deal on Thursday to place an American missile defense base on Polish territory, in the strongest reaction so far to Russias military operation in Georgia.

Russia reacted angrily, saying that the move would worsen relations with the United States that have already been strained severely in the week since Russian troops entered separatist enclaves in Georgia, a close American ally.

But the deal reflected growing alarm in countries like Poland, once a conquered Soviet client state, about a newly rich and powerful Russias intentions in its former cold war sphere of power. In fact, negotiations dragged on for 18 months  but were completed only as old memories and new fears surfaced in recent days.

Those fears were codified to some degree in what Polish and American officials characterized as unusual aspects of the final deal: that at least temporarily American soldiers would staff air defense sites in Poland oriented toward Russia, and that the United States would be obliged to defend Poland in case of an attack with greater speed than required under NATO, of which Poland is a member.

A sense of deepened suspicions  and the more darkly drawn lines between countries in the region  were also apparent in the emotional reaction from Russia.

It is this kind of agreement, not the split between Russia and United States over the problem of South Ossetia, that may have a greater impact on the growth in tensions in Russian-American relations, Konstantin Kosachyov, chairman of the foreign affairs committee in the Russian Parliament, told the Interfax news agency on Thursday in Moscow.

South Ossetia is the pro-Russian enclave inside Georgia where Russia sent troops last week, following a military crackdown by the pro-Western government in Georgia.

The missile defense deal was announced by Polish officials and confirmed by the White House. Under it, Poland would host an American base with 10 interceptors designed to shoot down a limited number of ballistic missiles, in theory launched by a future adversary such as Iran. A tracking radar system would be based in the Czech Republic. The system is expected to be in place by 2012.

In exchange for providing the base, Poland would get what the two sides called enhanced security cooperation, notably a top-of-the-line Patriot air defense system that can shoot down shorter-range missiles or attacking fighters or bombers.

A senior Pentagon official described an unusual part of this quid pro quo: an American Patriot battery would be moved from Germany to Poland, where it would be operated by a crew of about 100 American military personnel members. The expenses would be shared by both nations. American troops would join the Polish military, at least temporarily, at the front lines  facing east toward Russia.

Russia has long opposed the deal, saying the United States was violating post-cold-war agreements not to base its troops in former Soviet bloc states and devising a Trojan Horse system designed to counter Russias nuclear arsenal, not an attack by Iran or another adversary.

Stop-and-start negotiations over the arrangement that was sealed Thursday had been under way for almost two years, with the Polish government reluctant to press the deal in the face of strong opposition  and retaliatory threats  from Moscow.

For its part, Washington had balked at some of Polands demands, in particular the sale of advanced air defense systems that were unrelated to shooting down ballistic missiles.

But in a sign of the widening repercussions of the conflict in Georgia, those concerns were cast aside, as the offensive by Russias military across its borders was viewed around the world as a sign of Moscows determination to reimpose its influence across the old Soviet bloc.

Polish officials, in announcing the agreement, said it would be presented to the National Legislature, although it remained unclear whether the American base would require a vote of approval.

The other half of the American missile defense system in Europe would be an advanced radar in the Czech Republic for tracking specific targets and then precisely guiding an interceptor to destroy a warhead. Likewise, that deal has been signed by the countrys leaders, and is awaiting debate in the Czech Parliament.

At the White House, the press secretary, Dana M. Perino, confirmed that senior officials had initialed the agreement. In no way is the presidents plan for missile defense aimed at Russia, she said. In fact, its just not even logically possible for it to be aimed at Russia, given how Russia could overwhelm it. The purpose of missile defense is to protect our European allies from any rogue threats, such as a missile from Iran.

The Bush administration, in an attempt to prove its sincerity and transparency, had invited Moscow to join as a partner in a continentwide missile defense system, sharing information and technology with NATO allies.

While Russian and American experts have discussed cooperation, senior officials in Moscow have kept up a nonstop stream of complaints about the system.

The agreement also poses potential political problems for Democratic critics of missile defense who would be fighting to cut financing for the program in the face of the specific request from Poland and in light of the Russian offensive into Georgia.

There is no such ambivalence on Russias periphery, where Moscows attack signaled danger, and offered logic for closer ties with Washington and NATO.

In Poland, the war in Georgia has dominated the front pages of newspapers, where it has been starkly characterized as Russian invaders attacking Georgia. For Poles, Russias actions also come as a vindication of Polands distrust of its former conqueror and was a warning about issues like energy security, one of the primary areas in which a resurgent Russia first began to exert itself.

We are worried that we are facing, under the strong arm of Russia, a situation where some kind of understanding would be reached that Russia would be given a free hand in the region, said Eugeniusz Smolar, director of the Center for International Relations, a nonprofit, nonpartisan research group in Warsaw.