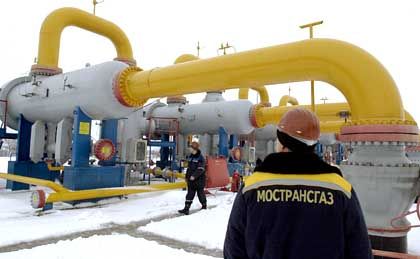 Russian gas pipeline workers near the border with Ukraine.

Europe is shivering at the prospect of gas shortages this winter after Russia switched off supplies to Ukraine in a price dispute widely seen as an attempt by Russian President Vladimir Putin to punish Moscow's former satellite state for becoming more pro-western since the "Orange Revolution" of 2004.

Russia stopped pumping gas to Ukraine on New Year's Day after Kiev refused to sign a new contract that would have quadrupled prices from their current preferential rate of $50 per 1,000 cubic meters -- a subsidized legacy from Soviet days. Ukraine has been importing natural gas from Russia for use as heat as well as fuel to run many of its factories at a cost well below what most of state-run Russian energy firm Gazprom's other customers in Europe pay. Russia has demanded an increase to bring the cost into line with world markets but Ukraine refused to pay the price hike, arguing Moscow is playing politics with its energy supplies.

The supply cut coincides with freezing weather and near peak demand in Western Europe, which imports a quarter of its natural gas from Russia, most of which is delivered by pipelines running across Ukraine.

The move has cast doubt on Russia's reliability as a supplier and sparked concern that millions of Europeans may face cold homes or exorbitant bills in coming months. It is also hurting Putin's already shaky reputation in the West just as Russia has assumed the rotating chairmanship of the G8 group of leading industrial nations for the first time this month.

The supply stop has already led to reduced natural gas deliveries to France, Italy, Austria, Hungary and Poland by as much as 35 percent, prompting state-owned Russian gas monopoly Gazprom to claim that Ukraine is siphoning millions of cubic meters of gas from pipelines running through Ukrainian territory to Western Europe.

Ukraine denied the accusation on Monday but said it would start tapping western pipelines if temperatures plummet. Germany, Europe's largest economy, gets about 30 percent of its gas from Russia, but Berlin said it expected no immediate shortages. Germany's largest gas firm, E.ON-Ruhrgas, warned there could be problems for big wholesale customers if the dispute dragged on. Britain receives only about two percent of its gas from Russia. 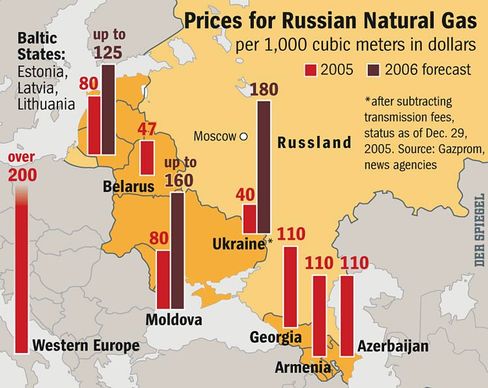 A comparison of how much various countries pay for Russian gas.

"We have gas reserves for 75 days. If the problem lasts a long time it will be serious," said German member of parliament Hans-Josef Fell, energy spokesman for the opposition Green Party. Fell said Russia's price demand appeared partly aimed at seizing full control of the pipeline network going through Ukraine. "By getting direct control of the pipelines Russia would have direct access to the Western European market where prices are higher," said Fell.

Former German chancellor Gerhard Schröder, a personal friend of Putin, should step in as mediator, said Fell. He said the dispute highlighted the need to find long-term alternatives to gas, production of which was already falling in Britain and the Netherlands and is set to decline in Russia too from 2010. Meanwhile, power-hungry China is also seeking to tap into Russian supplies.

Western commentators said Putin was using Russia's gas wealth as a weapon to intimidate its neighbors and shore up Russian influence in the region. Western-leaning Ukrainian President Viktor Yushchenko has annoyed Moscow by aiming to take Ukraine into the European Union and NATO -- a move which would further reduce Russia's influence over the states of the former Soviet Union..

The conservative German daily Die Welt wrote: "Moscow still regards its western neighbors as a back yard in which self-will isn't tolerated and is even punished."

Business daily Handelsblatt wrote that Russia had shown it wasn't an honest and reliable supplier of gas. "Chatting with the world's big powers while humiliating the little ones - that's what Russia's foreign policy looks like in the new year," it wrote. Russia was trying to destabilize Ukraine and thereby inflict a setback on Yushchenko in parliamentary elections in March. The aim was to get the more Russia-friendly oligarch clans from eastern Ukraine back into power, wrote the newspaper.

Eberhard Schneider, an expert on Russia at the German Institute for International and Security Affairs, said Russia wanted to hike prices to gain control of Ukraine's pipeline network in a move similar to a deal Russia struck with Belarus last year.

That would enable it to avoid paying transit fees and give Moscow unrestricted access to lucrative markets in western Europe. "It's partly political, partly economic," said Schneider. "Moscow wants to show the Ukrainian population that the new government is unfit to run the country and it wants to warn other former Soviet states not to turn their back on Russia."

"I don't understand what is happening in Russia at the moment and whether they are still capable of proper analysis. They are ruining their reputation as a reliable supplier of gas and are deterring western customers. They're also misjudging the political situation in Ukraine if they think this move will strengthen Yushchenko's opponents. They don't know the Ukrainians. They'd rather freeze than submit to Moscow."

Yushchenko, who has so far failed to live up to hopes for an economic revival, has said Ukraine is prepared to pay more for its gas but won't agree to a big jump all at once. And some politicians in Ukraine are threatening to retaliate for any price hike by raising the rent Russia's navy pays to use the Ukrainian port of Sevastopol as headquarters for its Black Sea fleet.

Elmar Brok, a member of the European Parliament for Germany's conservative Christian Democrats, said he had been told by Russian officials that the gas price for Georgia was to be increased only two-fold, a far smaller hike than Ukraine's. "It seems that energy is being used as a political instrument."

The United States government was quick to express its concern. "Such an abrupt step creates insecurity in the energy sector in the region and raises serious questions about the use of energy to exert political pressure," State Department spokesman Sean McCormack said in a statement on Sunday.

German Economics Minister Michael Glos, whose country is Russia's biggest gas customer, warned Moscow it must act responsibly if it wants Germany is to import more Russian gas in the future. "Thirty percent of our gas comes from Russia at the moment. That should be increased," Glos told the German radio station WDR. "But it can only be increased if we know that deliveries from the east are dependable."

Meanwhile European energy ministers have appealed to both Moscow and Kiev to keep gas supplies steady and called an emergency EU meeting for this Wednesday. The EU's External Relations Commissioner, Benita Ferrero-Waldner, warned Russia and Ukraine that their reputations as energy suppliers were at stake and called on them to settle the dispute. "Any negative action would shake the confidence of the Europeans in these suppliers," she told German radio station Deutschlandfunk. 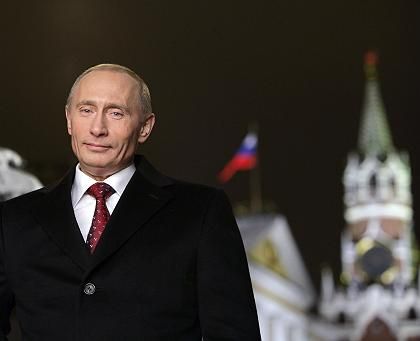 A Happy New Year from Russian President Vladimir Putin, seen during the recording of his annual televised New Year"s message at the Kremlin.

The affair has also  fuelled criticism of Schröder for agreeing to take a top job in the Russian-German consortium building a gas pipeline under the Baltic Sea straight from Russia to Germany, a move seen tainted with favoritism given Schröder's friendship with Putin. The undersea pipeline has been condemned by Poland, the Baltic states and Ukraine because it could be used by Moscow to raise pressure on its closest neighbors, since Russia could shut off eastern pipelines while continuing supplies to Western Europe. "A former German chancellor manning the Russian gas cannon. What an absurd idea!" wrote German mass circulation daily Bild.

For the time being, Ukraine is covering its gas requirements from its reserves and from imports from Turkmenistan. Vera Golizia, a housewife living in Kiev, said she had stocked up on candles. She blamed the crisis on Putin's desire for revenge. "Putin is angry because President Yushchenko doesn't want to be treated like a little brother," she told the German news agency DPA.