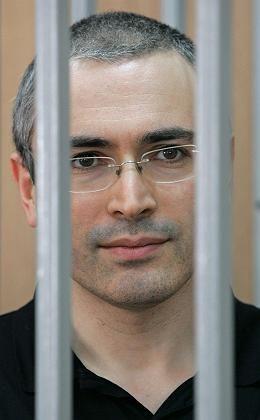 A verdict in the trial of former Yukos chief Mikhail Khodorkovsky has been delayed until after world leaders visit Moscow to commemorate the 60th anniversary of the end of World War II.

A Russian court on Wednesday delayed issuing a verdict in the trial of former Yukos oil magnate Mikhail Khodorkovsky on charges of tax evasion and fraud. But rather than slowing the debate about the controversial case, it is likely only to fuel it further in Russia, where some critics charge President Vladimir Putin is operating outside the rule of law and others are charging the government is conducting an anti-Semitic campaign against prominent Jewish businessmen.

Yevgeny Kiselyov, the editor-in-chief of the liberal weekly Moskovskiye Novosti, believes Khodorkovsky's fate "will not be determined by a court room, but rather personally by President Putin," whom he alleges is committing a "war of decimation" against the Yukos oil company. The court's decision to delay its ruling until May 16 neatly sidesteps what Kiselyov has described as a major political problem for Putin. On May 9, world leaders including United States President George W. Bush are expected in Moscow to commemorate the 60th anniversary of the end of World War II. "The state powers understood that a conviction of Khodorkovsky before the arrival of Bush and other state guests would put a damper on the festivities," said Vladimir Ryzhkov, an independent member of the Duma. Journalist Kiselyov had earlier warned that a "harsh ruling" and long prison sentence "would hardly do anything to advance already difficult relations between Russia and the west."

The Kremlin arrested Khodorkovsky in 2004 and then auctioned off the production unit of Yukos, ultimately renationalizing the company's most lucrative business. IT was a dubious move that has frightened foreign investors and politicians alike. During her recent visit to Russia, US Secretary of State Condoleezza Rice said she was concerned about rule of law in the country as well as concentration of power. "Russia has been experiencing a kind of concentration of power in the presidency, in the Kremlin, really at the expense of countervailing institutions like a strong legislature or an independent judiciary or, perhaps most importantly, truly independent media," Rice said. "This means that, whatever the intentions of President Putin are, or those around him, you don't have the ability of those other institutions to provide a check on power."

But Rice has been giving Putin the kid glove treatment compared to some of his critics back home. Grigory Yavlinsky, whose left-liberal Yobloko Party failed to clear the five percent hurdle for entering into the Duma, Russia's parliament, in December 2003 elections, says the trial shows that rule of law is being completely ignored in Russia. Yavlinksy says that since the days of Soviet dictator Joseph Stalin, Moscow hasn't "bent the laws so demonstratively and crassly" as Putin is currently doing. He believes the country has placed itself on a path toward "self-destruction as a nation and a country."

Leonid Nevzlin, Khodorkovsky's former deputy at Yukos, still owns shares in what remains of the company. He fled to Israel two years ago, where, with the help of the Israeli government, he is now dodging an arrest warrant issued by Russian authorities. "The situation today I would describe as Stalinism," he told the New York Times in an interview in late March. Putin "enjoys the absolute power of one person." He exploited the justice system and the press to intimidate businessmen and expropriate Yukos, he said.

More damningly, Nevzlin said the proceedings against Khodorkovsky also show "elements of anti-Semitism." Putin, he claimed, "is surrounded by anti-Semites, from the prosecutors all the way to the FSB (the successor intelligence agency to the KGB)." Back in Russia, Nevzlin was president of the Russian Jewish Congress, an office he took over in 2000 from Vladimir Gusinsky, a media entrepreneur driven into Israeli exile by the Putin regime.

Nevzlin's successor as president of the Russian Jewish Congress, Vladmir Sluzker, has been far more cautious in his public statements than Nevzlin. In an interview with the Kremlin-aligned Komsomolskaya Pravda newspaper, Sluzker described the Khodorkovsky case as a "tragedy" and the consequence of a "conflict over power." Companies in Russia, he warned, would not be well advised to "engage themselves in the political sphere." Sluzker, who is also a member of the Kremlin-aligned Federation Council of the Russian Federation, advises Jews in Russia: "not to get involved in conflicts with the ruling powers." Instead, he suggests, Jewish business people should donate their money to synagogues or charitable projects.

Even so, many Jewish business people who have put two and two together are growing increasingly worried. Is it just a coincidence that, after forcing finance magnates Vladimir Gusinsky and Boris Berezovsky to flee, the Kremlin is now sending its judiciary after Khodorkovsky, they ask. That makes three attempts to prosecute Jewish businessmen. Sluzker doesn't know if there is a link, but says many Russians have even more animosity towards wealthy Jews than they do against rich people in general. For that reason, he pleads for caution during public appearances. Damage control, evidently, is what he considers to be the order of the day.

Nevertheless, he still isn't afraid to make the occasional political demand. Recently, in a letter that drew outrage and concern both in and outside of Russia, nationalist members of the Duma called for a ban on Jewish organizations in Russia. The initiative came on the eve of Putin's visit to Auschwitz, and Sluzker says that is no coincidence. The Russian Jewish Congress official is now demanding "decisive measures in the fight against anti-Semitism and xenophobia."

Still, whatever he may think about the views of his predecessor at the congress: Sluzker knows it would create difficulties for Putin in the west if it was suspected that a disguised anti-Semite was sitting in the Kremlin. And as a Jew who wants to live and work in Putin's Russia, he hopes that the president, despite the proceedings against Khodorkovsy, won't strike at any further businessmen from Moscow's Jewish community. Then again, Sluzker's predecessor Nevzlin thought he was safe, too. Four years ago, he was considered a major supporter of the Putin-loyal United Russia Party and he was in good stead with party officials. Today, he lives in Israel.