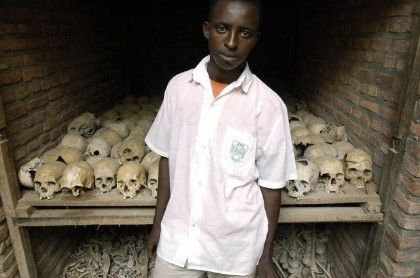 Romain Ngoga, 17, stands outside a church where the skulls and bones of some of those killed in the genocide are stored.

Twelve years after a 100 day long killing spree left some 800,000 Rwandans dead, the tiny African nation continues to search for accountability and some sense of justice. Perhaps the most surprising of the accused is a force that was sent there to protect against the genocide -- the French military. Not only did French soldiers fail to prevent the massacre, says the Rwandan government, they actually facilitated it.

Starting today, a seven-person panel headed by former Justice Minister Jean de Dieu Mucyo will hear testimonies from people alleging French soldiers actually took part in the genocide. The Rwandan government has alleged since 1994 that French soldiers trained and armed some of the Hutus that carried out the massacre, and also allowed Hutu extremists to enter camps set up to protect Tutsis. French soldiers were sent to Rwanda under a UN mandate during the height of the killings to secure a humanitarian buffer zone. The New Times in Kigali says some 50,000 people are reported to have been killed after French forces brought Tutsi's out of hiding under the false pretext that they had secured the peace.

France denies having any role in the atrocities, but they have set up a military tribunal last year that is currently investigating accusations by six Tutsis that French troops were complicit in the genocide. Last year, a former French soldier claimed that French troops had trained Rwanda militia during the two years prior to the genocide.

The panel will hear testimonies from 25 people, including Rwandans who lived in areas within the French buffer zone -- Operation Turquoise -- during the height of the 1994 genocide and claim to have witnessed French soldiers facilitating the massacre. "This is an important inquiry that should be witnessed by everyone interested in this important episode in history," Mr. Mucyo was quoted by AFP.

After hearing the testimony, the panel will have the next six months to determine whether claims should be filed against the French with the International Court of Justice in The Hague.