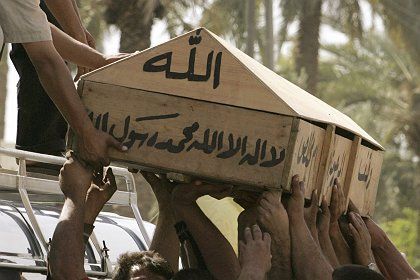 The trans-Atlantic Ice Age was intense. German Chancellor Gerhard Schröder and US President George W. Bush -- close allies during the post-Sept. 11 offensive in Afghanistan -- had nothing but disdain for each other when it came to Iraq. On Aug. 1, 2002 Schröder elected to take the final step in severing his relationship to the president. With an eye on autumn elections, he promised that Germany would not take part in a US-led military "adventure" in Iraq.

The statement marked the start of a major diplomatic rift between Washington and Berlin -- one that is still being mended today. Schröder also took heat in the media and many Germans raised their eyebrows at Schröder's apparent exploitation of anti-war sentiment to win re-election.

In his memoirs, which hit bookstores on Wednesday evening in Germany, Schröder professes surprise at the intensity of the reaction:

"I was completely flabbergasted by the reactions of the opposition and a few particularly bellicose members of the media, who were appalled by the fact that  I had made Iraq a topic in the election campaign. How else could I have survived this campaign without exhibiting a clear position on this issue that meant so much to people?"

Just a few weeks later, Cheney gave a firebrand speech on Aug. 26, 2002 in Tennessee that Schröder describes in his memoir as a "tough one," a "carefully prepared bit of agitation for the coming conflict." Cheney infamously claimed that "only idiots or cowards could possibly believe" the invasion was avoidable. With US special forces unable to capture al-Qaida head Osama bin Laden, Schröder suggests the CIA was eager to shift focus to Saddam Hussein -- America's "sworn enemy" in Cheney's words.

"To justify this change in strategy," he writes, "Cheney turned mere assumptions into certainties."

Cheney also predicted in the speech that Saddam's collapse would give people a chance to "promote values that can bring lasting peace" and that the people of Basra and Baghdad would cheer the American soldiers when they arrived.

"What a string of miscalculations!" Schröder writes. "Cheney was never held accountable for any of these mistakes -- or perhaps they were deliberate distortions?"

Not all of Schröder's recollections of the period are as negative. Months after distancing himself from Washington's bellicosity, in November 2002, NATO leaders met at a tension-laden summit in Prague. Just before the meeting, US Defense Secretary Donald Rumsfeld had refused to shake hands with his then-German counterpart, Peter Struck, when they crossed paths in Warsaw. Schröder recalls the summit being "overshadowed by grotesque speculation over whether Bush and Schröder would shake hands."

"In the standard 'family photo' of the heads of state, I stood directly behind Bush, who turned around at that moment and said to me 'this is what they're all waiting for,' held out his hand and laughed. It was a remark that was typical of his chummy approach to dealing with people."

During those crucial months, the United Nations' chief weapons inspector, Hans Blix, was busy criss-crossing Iraq with his team searching fruitlessly for weapons of mass destruction. Schröder says that Blix's inspection reports had often been used in top-level discussions about Iraq in Berlin.

He describes the results of Blix's work as clear: "There were no traces of weapons of mass destruction in Iraq." The ex-chancellor describes Blix as having maintained a "stoic and unwavering stance" during his thorough inspections and writes that he "continue(s) to respect" that work today. Schröder also found the political campaign waged against Blix by the Bush administration to be deeply troubling.

"The man whose mission was to uncover the truth for the United Nations and who was so rudely pushed aside later recounted his experiences in a book. In a piece of criticism, which has been praised as brilliant analysis, he shows how a large-scale propaganda maneuver was staged before the eyes of the global public. And Blix is right ... No, the conclusions reached by the UN's chief weapons inspector apparently didn't fit into the picture the American administration was determined to paint of Iraq."

Jan. 30, 2003 proved to be a watershed day for European Union relations. Under domestic pressure at home in a country where the majority opposed an Iraq war, Tony Blair's government sought signatures of prime ministers of seven other European countries for a letter that offered indirect support for the imminent invasion of Iraq. The letter served as a snub for Germany, France and other Western European Countries that had been critical of the calls for war.

"As much as I could understand the new EU members from Eastern Europe who, for historical reasons, wanted to take sides with the United States, I was equally unable to recognize any even remotely equivalent legitimacy behind the other EU states signing the document."

The letter, published in newspapers across Europe, drove a wedge between EU countries and spoiled hopes for a common European foreign policy. Three of the signatories were new EU member states from Eastern Europe.

"What an opportunity we missed with all these quarrels!," he laments. "A united European stance could have contributed to dissuading America from making a fatal mistake."

On Feb. 5, Colin Powell gave his famous speech before the UN in which he laid out the case for the invasion of Iraq. It was only after this that France officially teamed with Berlin and became part of the anti-war alliance. At this point, Schröder recalls, the pressure from Washington became more bearable. Schröder by then had grown accustomed to criticism from the US for his stance, but it was nothing compared to what Washington had in store for Chirac and his compatriots.

"Jacques Chirac assumed an almost stoic position, no matter how stormy the winds blowing from across the Atlantic became. He remained undeterred by the threats of boycotts against French wine and other products from his country or by any other absurd abuses. Just think of the idea, crafted in the USA, of changing the name, in a single patriotic act, of 'French fries' to 'freedom fries.'"

Days later, millions took to the streets across Europe and the world to protest the coming war -- including a half million in Berlin.

"I can still see the impressive images today, as 500,000 demonstrators congregated on the Strasse des 17. Juni in Berlin. No one can describe the deep sense of validation and reinforcement of one's political position one gets from this kind of public support."

Looking to the current state of affairs in Iraq, Schröder sees the recent rebellion of top retired US military generals as a sign that "Americans are beginning to deal with the lack of rationality within the government and among its representatives." Schröder ventures that the time to start thinking about a pullout has arrived.

"Perhaps the time has come to encourage the United States to leave Iraq. However, this would require immense strategic preparation that would have to enable all parties involved to save face, and would also include safe withdrawal of the troops."

This, he argues, would require a "peace initiative that takes away support for the terrorists and discourages them." He argues the US will be unable to achieve this on its own.

"Europe and, if possible, another worldwide coalition, including the Arab countries and Israel, would have to be involved. We must begin paving the way now, otherwise we run the risk of terrorists establishing additional footholds worldwide. If that happens, there will be more at stake than a trans-Atlantic spat."