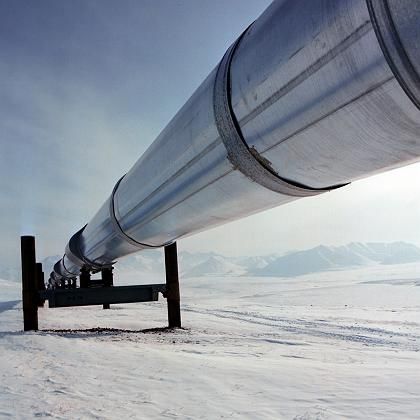 Schröder on the pipeline: "Europe's demand for energy cannot be satisfied without Russia's wealth of natural resources."

Gerhard Schröder has been criticized for many things in his life -- not least of which being the fact that he's had four wives. But few of his relationships have come under as much fire as the friendship he shares with Russian President Vladimir Putin. Their families vacationed together at the Russian seaside resort of Socha and Putin had close emotional ties to Germany, where he had been stationed as a KGB officer in Dresden during the Cold War.

Given that almost 43 percent of all the natural gas and 34.1 percent of the petroleum consumed in Germany comes from Russia -- it's also a strategically important relationship.

But many a critic of Schröder has argued that this energy dependence motivated Schröder to gloss over his chum Vladimir's democratic deficiencies -- which included a massive crackdown on the independent media and non-government organizations, as well as human rights abuses in Chechnya. Schröder constantly defended Putin while in office, calling him a "flawless democrat" and he repeats the claim with the publication of his memoirs.

"It would be wrong to place excessive demands on Russia when it comes to the rate of domestic political reform and democratic development, or to judge it solely on the basis of the Chechnya conflict. I discussed this sensitive issue with Putin many times. Russia, as it happens, is involved in a domestic political conflict with Islamic fundamentalism. Granted, the Russian military frequently shows little sensitivity or political insight, and it only makes the confrontation worse with its disproportionately harsh way of dealing with the matter."

This is still a problem, he says, "despite the fact that criticism of Russia's actions has subsided in the wake of revelations of American GIs' attacks on Iraqi civilians and the torture scandal at Abu Ghraib." He goes on to say that both of the conflicts share religious origins -- the only difference being that the "Iraq conflict only became virulent after the US and its allies marched into the country." But in Chechnya religion was at the core of the conflict from the beginning. And it's a problem that, unfortunately will remain a major part of the domestic political landscape in Russia for years to come.

"As is the case in the Middle East, in Iraq, fundamentalists in the Islamic world are inciting and financially supporting the conflict. The necessary funds that are being used to buy weapons flow from some oil-producing Arab states into the crisis regions. Only when this support ceases to flow into Chechnya can there be any hope of a political resolution to the conflict, and it can only take the form of a solution within the Russian Federation."

If Schröder's gentle comments about the state of democracy angered many, then his decision shortly after leaving office to join the board of a joint venture with Russian gas company Gazprom to build an undersea pipeline to Germany was simply outrageous. Critics saw Schröder literally cashing in on his friendship with Putin. The criticism continued to mount after Moscow dubiously began nationalizing parts of the Yukos oil company and cut off gas supplies to Ukraine over a price dispute. Schröder takes a stab at his critics in the memoir:

"The public debate that developed as a result of my decision went well beyond the darkest visions I could have imagined.  Speculation that my support for the pipeline project during my chancellorship was in any way meant to further my own interests are categorically wrong and in fact defamatory. My support for the Baltic Sea pipeline was based solely on the interests of our country and Europe.  Europe's demand for energy cannot be satisfied without Russia's wealth of natural resources."

"It is in Europe's interest to provide Russia, as a major energy producer, with access to the domestic energy market -- just as Russia allows European energy companies to participate in the exploitation of its gas and oil reserves. Part of the issue is to openly confront the question of whether Russian producers should be permitted to do business directly with consumers, and whether they shouldn't be given the opportunity to acquire holdings in German municipal utility companies and energy corporations."

In his many conversations with Putin, Schröder recalls, one of the dominant issues is Moscow's desire for proximity to Europe and closer ties. Schröder argues that Europeans should dispel the stereotype of Russia as an aggressor and that a "clear European perspective" for Moscow is in both sides' interests.

"We must set aside the widespread notion that Russia is a bear just waiting to devour everyone else. This couldn't be further from the truth. In Russia there is a growing sense that the country will only be able to truly fulfill its role in the world on equal terms with the United States if it manages to secure a comprehensive partnership with Europe. And the same applies to Europe."