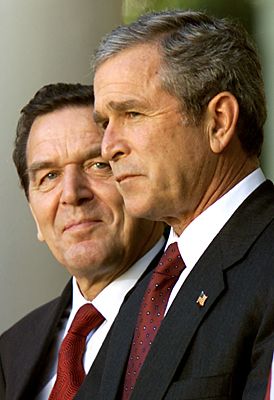 Not a lot of love was lost between German Chancellor Gerhard Schröder and US President George W. Bush.

It was an impressive sight. On Feb. 15, 2003, some half a million people took to the streets of Berlin to march against the looming US invasion of Iraq -- part of a Europe-wide march for peace. Many posters reflected the overwhelming sentiment against war. Others aggressively proclaimed a different sentiment -- against US President George W. Bush.

It was an antipathy that famously reached all the way into the upper echelons of the German government. And the feeling was mutual. By the spring of 2003, the good will that existed between Germany and the US in the wake of Sept. 11 had completely evaporated. Bush was angry with Schröder for campaigning for re-election in the autumn of 2002 on a platform which included a clear "no" to German involvement in any "adventures" in Iraq.

Schröder, as he makes clear in his newly published memoirs, was unimpressed by Bush's hawkishness and the president's turn away from Afghanistan and toward what Schröder saw as an unnecessary conflict.

"I don't know exactly when in the year 2002 the change in justification for a war against Saddam Hussein's Iraq took place -- when, in other words, the fight against international terrorism slid into the background and the possible existence of weapons of mass destruction was thrust into the foreground. But the change made me increasingly distrustful."

Even at the beginning of 2002, though, Schröder began to have his doubts about the American president. Bush's shifting of attention from Afghanistan to Iraq began early in the year. Schröder found his Jan. 29, 2002 speech -- in which Bush coined the phrase "Axis of Evil" -- to contain "almost Biblical semantics."

Then, in May 2002, Bush came for a visit in Berlin. Already, the post-Sept. 11 mood had changed with more than 100,000 demonstrators taking part in various protests. Bush did his best to sound moderate -- indeed, Schröder claims he was left with the impression that Bush had decided not to go ahead with the invasion of Iraq.

But it was a lunch just before Bush left Berlin that perhaps left the greatest impression on Schröder:

"In our conversations," Schröder writes, "it was constantly clear just how much this president considered himself 'God-fearing' and indeed saw God as his ultimate authority." Schröder assures his readers that he has no problem with religion or the religious. "But the problem  begins when the impression is created that political decisions are a result of this conversation with God."

Indeed, Schröder indicates he is deeply mistrustful of the role religion plays in the United States:

"In my opinion, the demonizing of George W. Bush tends to divert attention from the need to critically examine a political alliance in the United States that I consider problematic for the world and America: the alliance between neoconservative intellectuals and Christian fundamentalists, which had and still has a great deal of influence over the policies of the United States and its president."

Schröder goes on to say that the West is right to criticize Islamic states for not having a clear separation between church and state -- which he describes as a great advance of civilization.

"But we are not nearly as willing to acknowledge similar tendencies in the United States when it comes to Christian fundamentalists and their interpretation of the Bible. If both sides claim to be the rightful owners of all valid truths, there can be no room for peaceful solutions."