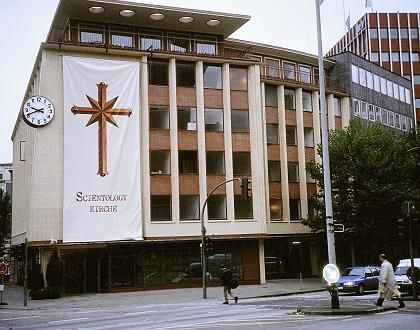 The church of Scientology in Hamburg

The ad on a supermarket notice board in the city of Essen was aimed at all the parents in the neighborhood. Right nearby there was an "alternative school" where learning was still fun. "Sounds just right", thought one dad, who is now reluctant to give his name out of sheer fear. He took down the phone number of the school and that same evening arranged some after-school tutoring for his daughter.

At first it seemed as though the new teacher was a really good find. However, the motherly woman then started to ask his daughter personal questions about friends and family, and referred the girl, who had just turned 18, to a colleague for "life coaching" and then, despite the fact that the girl was now doing well in school, recommended that she come three times a week instead of just once. This all seemed suspicious to the girl's father. Was this really just about ironing out a few problems in reading and writing?

Spurred on by growing doubts, he called Sabine Riede at Essen's 'Sect Info' advice center. The center was well acquainted with the teacher and her colleagues, who the center views as high-ranking Scientologists.

German experts on sects are now warning that the organization, which spans the globe, is currently making a big effort to infiltrate the German education market. Even the Federal Office for the Protection of the Constitution has noticed these activities: At the recent presentation of the Constitution Report for 2005, Scientology was mentioned as establishing itself very conspicuously in "youth work."

The German authorities have long been suspicious of Scientology. The Federal Labor Court ruled in 1995 that the Scientology branch in Hamburg was not a religious congregation, but clearly a commercial enterprise. Then in 1997 the Federal Administrative Court ruled that it was   irrelevant whether Scientology was a religion, as its legal status must be judged by its level of commercial activity. This means that the group cannot avail itself of the tax-free status that applies to other religious and non-profit organizations. In 1998 a commission set up by the German parliament recommended that the organization be kept under observation by the Office for the Protection of the Constitution. The German government's official Web site states that it considers the Scientology organization a commercial enterprise "with a history of taking advantage of vulnerable individuals and an extreme dislike of any criticism."

Over the past few months Riede, an educational expert, has learned of 20 new after-school tutoring centers that are run by Scientologists, in Frankfurt, Hamburg, Stuttgart and elsewhere. Most of the customers of these centers have no idea who they are entrusting their kids to. There is rarely a mention of the word 'Scientology' in the brochures, at most the name L. Ron Hubbard appears here and there: The founder of Scientology thought of children as nothing other than "adults in small bodies."

The letter that was sent to the teachers in the small town of Butzbach seemed harmless. They were "warmly" invited to the opening of a "learning house" -- an institution run by a Scientologist married couple. During coffee and cake the teachers could get an idea of how the "learning house" functioned. The couple handed out flyers in the school yard: the quickest to register would receive two free hours of tutoring.

Alarmed by similar advertising, Bavaria's Education Ministry sent an urgent message to all school directors: In the future, parents and teachers should carefully examine who is hiding behind these kinds of education offers. Whoever lets their kids get into the clutches of Scientologists , it warned, risks them acquiring a "machine-like attitude."

Scientology spokeswoman Sabine Weber reacts touchily to this kind of language: she says that for years "one lie after the other" has been spread about Scientology. She feels its a good thing that members of the organization are doing something for Germany, a country whose education system was slammed by the recent PISA educational review conducted by the Organization for Economic Cooperation and Development. This argument holds sway. Weber's fellow Scientologist, Dominique Bouyer, who advises the Butzback learning house, talks about a "good response," "The number of students that we are teaching is increasing," he says.

The reality is that the tough competition in today's knowledge society has lead to a huge offer of educational services. Every third German child is pairing up with a tutor or attends one of approximately 3,000 after-school centers. But who is assessing the quality of these centers? Werner Kinzinger, director of Stuttgart-based Action on Education Information, complains that because these centers do not come under the control of the school board, anyone can establish one. He has been demanding a kind of certificate for these centers for years -- but up until now with little success.