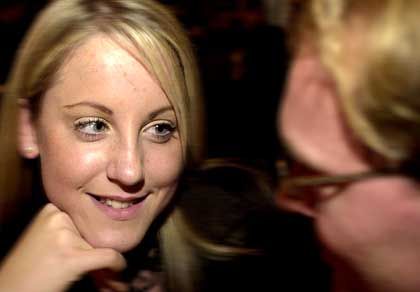 Now you've got her interested -- time to switch to an in-depth political discussion.

First off: semantics. The word "flirt" has two meanings: one for Germans and one for the rest of the world. Most of the 3 billion men on the globe today figure their best shot is to make their make obvious. And the calculus is simple: If she doesn't know you're interested, your chances are nada -- if she can't ignore your come-ons, at least she's got to make a decision.

German women, though, have become conditioned to a much more subtle style of coquetry. Interest is indicated by way of a studied, concentrated look on the part of the man -- a gaze which may, but often doesn't, include a smile. Rather than a stare, though, the look should be brief and fleeting -- and the man's job is done. In a German-on-German flirt, the power rests solidly with the Fräulein.

Which means that when we swashbuckling foreigners show up and actually flash our pearly whites and -- gasp -- say "hi" to a German woman, it comes across as overly forward. Not that you'll be slapped right away, but your would-be quarry will no-doubt be thinking to herself, "Meinemutterhatmichschonimmervorsolchentypengewarnt." German chicks are simply wary of aggressive flirting.

If you've met German women outside of Germany, you may be tempted to dispute the above characterization of the German flirt. And it's true, German women will swoon over their vacation dalliances: "Those southern men," they'll giggle and gush. "Sooo forward -- so unlike boring German men!" But vacation is vacation. And home is different.

On their turf, the type of aggressive flirting practiced by the semi-desperate the world over will shake German women. Theyll look at you with furrowed brow, and some apprehension. Theyre out of their comfort zone. What DOES he want? Instinct kicks in and directness -- that silver bullet which vanquishes all well-intentioned flirts -- takes over. They'll turn away or let your sentences drop -- and with them your self-esteem -- into a heavy silence. Well intentioned smiles are often rebuffed by a stare implicitly accusing you of mortally wounding her beloved pet terrier.

But then again -- as with most flirts -- it's hit and miss. And often as a foreigner, you have the advantage of being different and intriguing. Observe carefully and don't over do it -- the poor thing will likely be a bit on the defensive from the start if you come on too strong. But an opening may appear -- when her impassive visage shows a flicker of interest. At that point, it's up to you.

For foreign women in Germany, flirting with the natives can be problematic. Your advances are often completely misconstrued, misunderstood or, just plain missed. One problem is that German men think youre flirting when youre not. More serious is that they often dont know how to react to your flirting when you are.

The very worst, though, is trying to tell when a German man is flirting with you. While a New Yorker might gaze seductively at you across a dance floor -- or even say Yo baby! You are fine!" -- a German guy will often merely stare expressionlessly, making you feel like youve reverted to the Funky Chicken or have a booger on your cheek. But he may be desperately in love with you, but be quite simply unable to indicate his interest in anything beyond discussing Angela Merkels domestic policy over a cup of chamomile tea. By the fifth date, you're stuck wondering whether youve developed a sudden case of bad B.O.

In the British book "The Xenophobes Guide to the Germans," an unforgettable passage says something like Germans have the unique ability to bore the pants off of you when it comes to amour. Perhaps: In the native habitat of homo curiosus s exus (the common, cautious subspecies of the German man), things can take a little longer and are a bit more considered than in other countries. In fact, it could be that he entirely skips the superficial flirting thing, works on establishing a friendship and then -- days, weeks, months, years later -- finally manages to bore your pants off. Which, if you havent already given up, might not be boring at all: Under those cold exteriors is often a hot, seething mass of passion.

The bottom line, though, is that it is often up to the foreign woman to break the ice in a way the German man understands: heavy on the warm-yet-serious discussion and lighter on the flippant-friendly-sexy thing. Flirting in Germany is not nearly as fun, meaningless or flattering as it is elsewhere. But the sometimes awkward but also deliciously subtle dance between the genders here might just grow on you. And when you do go back home you might find yourself shocked at your countrymens vulgar ways. Yo baby? Gross!