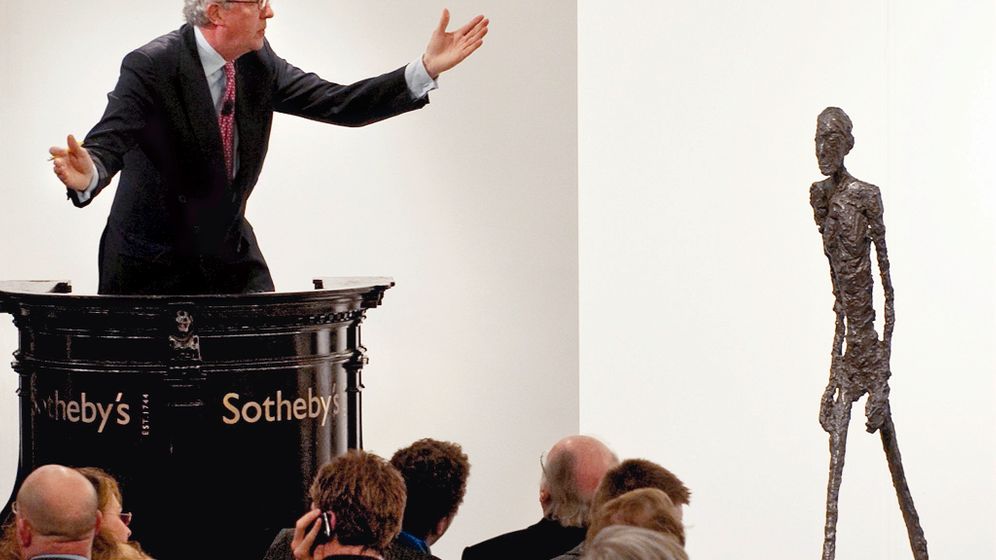 Lothar Senke, the Count of Waldstein, carried two cardboard boxes into a conference room at the Hotel Steigenberger at the Frankfurt Airport. Inside were five bronze sculptures -- originals by Alberto Giacometti, according to notarized documents.

In exchange, the count received a black leather briefcase containing €338,000 ($478,000) in cash from the buyer and began to count the money. He planned to take the payment, the first installment in a multimillion-euro deal, to a business partner waiting in the parking lot. But Senke didn't get far -- in fact, he only made it as far as the hotel lobby before the handcuffs clicked shut, a police officer recalls. A mobile special response unit of the German police had struck.

The operation, which took place on August 11, 2009, marked the end of a large-scale deception. The count was not a count; the buyer was no art lover, but rather an undercover officer with Germany's criminal investigation department; and the Giacometti sculptures were not actually made by Giacometti. Police arrested not only Senke, but also his partner Herbert Schulte -- an art dealer in Mainz -- as well as Schulte's wife and another accomplice.

The same day, police detectives in Mainz searched a 200-square-meter (2,150-square-foot) storeroom rented by Schulte, where they found rows of thin statues in Giacometti's iconic style. Some of the figures were just 10 centimeters (four inches) high, others larger than life, and most were bronze. The agents discovered a total of 1,000 sculptures -- more than the master created over the course of his entire life (1901 to 1966).

Giacometti, who lived in Paris and counted Picasso and Matisse among his friends, along with authors Jean-Paul Sartre and Samuel Beckett, has become the world's most expensive sculptor. The widow of a Lebanese banker purchased Giacometti's work "L'Homme qui marche I" at a London auction last year for the equivalent of €74 million.

There is hardly a more lucrative field for art fraudsters. The "Count of Waldstein," Schulte the art dealer and their accomplices seemingly focused on Giacometti for seven years, raking in over €8 million, police detectives specializing in art crimes later determined.

It has now been revealed that the band of forgers sold more than 200 fake sculptures, making it the largest scam, volume-wise, ever carried out on the German art market.

Believing his own Myth

A district court in Stuttgart is expected to hand down its sentence on Senke next week, marking the conclusion of a major criminal case. Schulte, his wife and two other art dealers in Wiesbaden, near Mainz, have already been convicted of continued fraud by a criminal organization. Schulte received a prison sentence of seven years and four months, while his accomplices were sentenced to two years on probation. But Senke, 61, still denies everything, insisting the sculptures are in fact originals. The man with the ponytail seems to have come to believe the myth he himself created.

"The Count, as everyone called him, drove up in a Rolls-Royce," recalls a lawyer in the northeastern German city of Schwerin. Senke formerly worked as a locomotive stoker for the state railway in the German Democratic Republic (East Germany), until he was jailed for political offenses. Officials in West Germany then bought him out of jail in the mid-1970s.

Selling Sculptures "Out of the Trunk of his Car"

Contact with Schulte, the art dealer in Mainz, provoked a major change in Senke's life. Schulte had already come to the attention of police detectives in Stuttgart years before. A comparatively small case of Giacometti forgery landed him in court in November 2008, after he and a used car dealer from Greece tried to sell 13 forged Giacometti sculptures.

What the public prosecutors and judges didn't realize was that even during Schulte's trial, his new partner, the "Count of Waldstein," cheerfully continued selling forgeries, some "out of the trunk of his car," as one witness testified.

The self-proclaimed nobleman put on a status-conscious front, always driving at least a Mercedes, but behind the scenes, the former railway employee lived modestly. Presenting himself as an art expert, he took a small room, No. 511, on the top floor of the Hotel Garni Am Hechenberg in Mainz, where he lived until his arrest.

Senke made his living at least partly from social welfare payments and he always settled his accounts in an orderly fashion. In the end, though, his attention to discretion slipped -- after his arrest, a maid found a forged statue next to the minibar.

Giacometti was also a smart choice on the forgers' part because to this day, no catalogue of the artist's works exists. Schulte also knew success depended on two things: the quality of the forgeries and the plausibility of their story.

To that end, he wrote a book called "Diegos Rache" ("Diego's Revenge"), publishing it in a limited run of just 300 copies and selflessly ceding authorship of the book to his partner, "Lothar Senke, Count of Waldstein."

Diego, younger brother and assistant to the moody Alberto Giacometti, set aside a secret stash of sculptures, according to the book. Diego, Schulte wrote, removed "the hard-won fruits of Giacometti's long nights of work" from the studio and produced casts of them, which he then "brought to the foundry either independently or in agreement with Alberto."

Diego hid these casts, the story continued, then sold them to collectors in Greece, France and England after his brother's death. It was from these art lovers that Senke, a.k.a. Waldstein, supposedly acquired the valuable pieces.

"Diego's Revenge" found its way into the hands of interested -- and wealthy -- readers. One was Wolfgang Schuppli, a banker and billionaire who once insisted in SPIEGEL: "I'm not an entirely stupid person." Schuppli bought a total of 52 forged sculptures between 2003 and 2007.

Schuppli received "confirmations of origin and authenticity" on a letterhead from the "Count of Waldstein." These letters assured him that, "Between the years of 1979-1981, Diego Giacometti provided pieces in his personal possession to two collectors of my acquaintance."

The forgers need not even have bothered backing up their background story with a book when it came to some of their customers. Once, in the city of Landau, "Waldstein" traded a supposed Giacometti sculpture for two paintings and 12 coins worth €85,000. Another time, he exchanged a "small bust on a double base" for a hunting knife with an ivory handle, worth €3,000.

Still, Schulte and Senke dreamed of a far bigger coup. Brokers eventually brought them into contact with two art dealers in New York, whom they offered 300 bronze sculptures for a price of €50 million. The "Count of Waldstein" told the Americans that Diego Giacometti had been a close friend of his and left him the sculptures upon his death. The art dealers, however, requested certificates of authenticity from the Giacometti Foundation in Paris. When these failed to materialize, the deal collapsed.

If it had gone through, the New York art dealers would have received no duplicates, only one-of-a-kind pieces. Experts were amazed to discover that no two of the confiscated sculptures were identical. All were modeled from wax, further formed with plaster, and then cast.

"A trained Giacometti eye can tell immediately that they're fakes," says Swiss art dealer Eberhard Kornfeld, who was a friend of the artist.

"Bad forgeries, some of them indescribably so," agrees Christian Klemm, an art historian in Zurich.

So who created, one by one, around 1,200 of these forgeries? Investigators discovered that Schulte had driven regularly to the Netherlands, where he picked up the sculptures and brought them to his storeroom in Mainz. Schulte also admits to sending bank transfers to the Netherlands amounting to €700,000. The recipient was a business partner known as "Brummie," who moved to Thailand five years ago. Schulte continued to send money there, too.

"We still don't know where the factory is, even after all these years," laments Véronique Wiesinger, director of the Giacometti Foundation, in Paris.

Wiesinger engaged Hamburg-based lawyer Kristoff Ritlewski to represent the foundation as a joint plaintiff in the trial in Stuttgart. "It was only due to our additional suit that we were able to obtain a ruling concerning copyright infringement as well," Ritlewski says.

In any case, Wiesinger reports, there are plenty of forged Giacometti sculptures still at large. It bothers her greatly to know that "at this point, these lousy imitations are being resold on eBay."