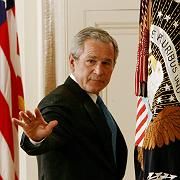 Goodbye to all that: But is it really the end of secret CIA detentions?

US President George W. Bush's announcement on Wednesday that 14 high-profile terrorist suspects had been shifted from secret CIA-run jails to the detention center at Guantanamo Bay, Cuba marks a new twist in a clandestine program that sparked outrage across Europe last fall. But European lawmakers and human-rights advocates were unimpressed by Bush's dramatic admission.

"By his admission that the CIA has indeed practiced illegal kidnapping and detention, Bush exposes not only his own previous lies," said Sarah Ludford, a British member of the European Parliament and vice chairman of a parliamentary inquiry into the CIA's secret prisons in Europe. "He also exposes to ridicule those arrogant government leaders in Europe who dismissed as unfounded our fears about extraordinary rendition."

The so-called extraordinary rendition policy-- or the secret abduction and detention of terrorist suspects by the CIA, in order to interrogate them in foreign countries where torture might be tolerated -- caused uproar and embarrassment last November when it was exposed by the Washington Post. US officials as well as European leaders denied any knowledge of the program, although a Council of Europe investigation pointed in June to "serious indications" that Romania and Poland had hosted prisons.

The 14 suspects now being moved out of CIA custody include Khalid Sheikh Mohammed, a suspected in the Sept. 11 attacks, who was apprehended during a public raid in Pakistan in 2003. He then disappeared from view, and Bush's decision to bring prisoners like him back "into the open" -- where they can be tried as prisoners of war -- is a response to a US Supreme Court ruling in June that struck down a plan by the Bush administration to try terrorism suspects in special military tribunals, outside protections offered by the Geneva Convention.

Bush said the 14 prisoners were the last ones remaining in CIA custody, but Manfred Nowak, the UN special investigator on torture, said, "of course there are many others." Bush didn't close the door completely on clandestine projects -- "having a CIA program for questioning terrorists will continue to be crucial to getting lifesaving information," he said in Wednesday's speech -- but he did insist that the US would not engage in torture. "It's against our laws, and it's against our values," he said. "I have not authorized it, and I will not authorize it."

The CIA program has its defenders. Australia's Foreign Minister Alexander Downer said on Thursday that information from the prisoners "has led to the capture and in some cases the killing of terrorists who might have otherwise killed innocent people."

But Larry Cox, executive director of Amnesty International USA, said it was "almost impossible to overstate" the damage the secret prison program has done to the United States' "reputation and moral authority" around the world. Some people held in the secret prison network -- most famously Khaled al-Masri -- have been proven not guilty. "This will not by itself restore our reputation as a country that respects international law," he said.

And it may be awkward for some European governments. The Council of Europe investigation concluded in June that at least seven other nations -- Germany, Sweden, Italy, Britain, Turkey, Bosnia and Macedonia -- "could be held responsible for violations of the rights of specific individuals" who were captured or handed over to the CIA in those countries. Sarah Ludford, the British member of European Parliament, said it was "highly implausible" that European leaders didn't know about the secret jails, but until now there had been a "pact of silence" among European leaders to deny the program -- at American request.

"Bush has now left the Europeans high and dry," she said.