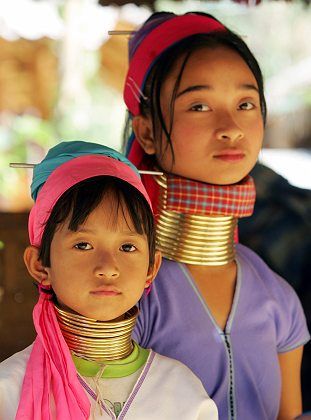 The Myanmar military junta has long sought to bring the Karen minority under its control. These two Karens have been refugees in Thailand for more than a decade.

The country has long raised eyebrows the world over. The United States has refused for years to do business with the rogue state, but many other members of the United Nations have been reluctant to upbraid the regime. Russia and China, in particular, have been skeptical of bringing the country before the UN Security Council, partly out of fear of jeopardizing lucrative trade agreements.

Yet while such a scenario may recall the months of international wrangling over what to do about Iran's nuclear program, in this case, the country in question is the Southeast Asian state of Myanmar. Earlier this month, the international community took a long overdue look at Burma -- as Myanmar used to be known -- and the Security Council voted 10-4 to place the country on the UN inner circle's permanent agenda. In addition to rampant drug smuggling, the unchecked spread of HIV and human rights abuses, a mounting human rights crisis on the country's eastern border with Thailand fueled the decision.

This vote is a major step forward towards getting the UN to accept its responsibility to act on Burma, said Yvette Mahon, Director of the London-based charity Burma Campaign UK. This is case of the US and UK acting on principle, while China and Russia are putting trade and profit before the interests of ordinary Burmese people.

Myanmar was once one of the richest countries in Southeast Asia, endowed with fertile land, precious teak wood and gems, and blessed with natural gas. Just this year, in fact, China -- the world's second largest energy consumer -- signed a memorandum of understanding with Burma for the sale of large quantities of off-shore natural gas. The estimated 10-14 trillion cubic feet of gas could yield total revenue of US $37-52 billion.

The US and European Union, for their part have had various types of economic sanctions on the regime since 1996, citing the house arrest of democracy advocate and 1991 Nobel Peace Prize winner Aung San Suu Kyi for 10 of the past 17 years. But even foreign ministers from the normally deferential regional economic body, the Association of Southeast Asian Nations, have issued harsh rebukes against the regimes foot-dragging on promised reforms. US President George W. Bush's wife Laura has said publicly she'd like to see a Council resolution on Myanmar.

Not that the pressure is likely to help. The country's military junta is notoriously unresponsive to outside pressure, and public rhetoric notwithstanding, signs point to it becoming more reclusive, not less. Late last year, the country moved its capital upcountry, to a construction site in a jungle town of Naypyidaw, 320 kilometers north of the former capital Yangon. Government employees were given no warning and were expected to relocate with their families immediately.

Its bizarre, said a senior Western diplomat in Yangon who asked not to be identified. It wasnt designed to be a workable city. It was designed to isolate. This is a country thats trying to close itself in, said the diplomat. This is a regime impervious to outside influence -- whether positive or negative -- they dont care what the world thinks of them! The government monitors phone calls, censors Web sites such as hotmail, g-mail and any sites related to Burmese democracy activism, and asks Internet cafe providers to take periodic snapshots of their customers monitors.

The UN vote last week comes as human rights advocates based along the border in Thailand say the current military offensive underway in eastern Burma, against the Karen ethnic minority, is the worst they have seen in 10 years. In the mountains of eastern Burma the Karen minority have, since the countrys independence from the British in 1948, lived mostly free from the rule of the regime. But in the regimes pursuit to gain complete control, it has pushed military battalions into remote villages, cutting off the villages from their fields, and forcing villagers into camps. Since the end of last year, it has created 18,000 refugees, according to the Thai Burma Border Consortium, an advocacy group based in Bangkok. They join the half million already displaced.

The militarys strategy for the last ten years has been to bring the entire civilian population under direct control for forced labor and monitoring, says Kevin Heppner with the Karen Human Rights Group, another advocacy group based in Thailand. And everyone who lives beyond that immediate control has to be relocated or killed. For years theyve been trying to do this but the villagers dont want to live under military control. So they evade the troops, leaving the villages before they arrive. They live with very little or no relief or aid.

The Karen's only respite has been during the rainy season. For the past decade, Myanmar soldiers have scaled back offensives from June through September and the Karen have used that time to tend to their crops and rebuild whatever was destroyed during the fighting. This year, though, the military has been ordered to fight through the rains in what many suspect is a final bid to gain complete control over Karen lands and defeat the Karen National Union (KNU), which is fighting to resist military domination.

The result has been thousands of refugees, and a growing humanitarian crisis. Indeed, according to a September report based on a series of surveys carried out since 2000 by the Back Pack Health Worker Team, a mostly Burmese cross-border medical relief group based in Thailand, some 12 percent of the Karen population is infected with malaria at any given time. Some 15 percent of children are malnourished. The report also links high rates of death and disease to life under military rule, where forced labor and displacements are common. 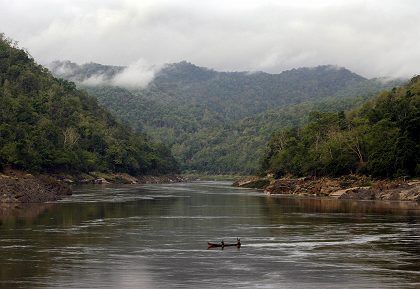 An ethnic Karen man crossing the Salween River from Myanmar into Thailand.

Living under their control means forced labor, confirms Naw Pi Htoo, 44, who has lost three of her seven children to disease in the malaria-infested hills. Naw Pi Htoo, along with 1,300 recently displaced villagers, now lives in the squalid Ei Tu Hta refugee camp in eastern Burma, along the Salween River that borders Thailand. They use the people to clear landmines and women and children to carry the militarys supplies, she says.

Since Thailand closed its border camps to incoming Burmese refugees in March, Burmese authorities have looked the other way as Thai-based aid groups have done what they can to help. Limited amounts of food and medicine make it over the river to the camp. And many new arrivals are in urgent need of care. On August 24, for example, 14 families arrived in the camp after a 12-day trek through the jungle, surviving on an occasional handout of boiled rice and by foraging for bamboo shoots and vegetables.

Billions for the junta

Sometimes people dont want to talk about politics, but we are health care providers, so must look at the big picture, said Nobel Peace Prize nominee Dr. Cynthia Maung, who chairs the Back Pack Health Worker Team. She also runs the Mae Tao clinic along the Thai-Burma border, which gave medical aid to 45,000 individuals last year, the majority of them Burmese refugees. Dr. Cynthia works with teams of backpackers that carry medical supplies through military-controlled areas. She estimates they have access to only about 150,000 of those displaced within eastern Burma.

Despite the human rights disaster, India and China are poised to benefit from untapped natural gas fields off of Burmas west coast, being developed by South Koreas Daewoo. The regime stands to earn between $12 billion and $17 billion in the next two decades from the fields.

Human rights groups from Thailand, the US, South Korea and India are appalled. A similar project in the 1990s -- the Yadana gas pipeline across a short bit of eastern Burma -- resulted in thousands of villagers being forcibly displaced. Instances of rape and murder were widespread. So too, were lawsuits afterward, with the French company Total and the American Unocal (now controlled by Chevron) settling out of court.

Why do human rights abuses happen in Burma? asked David Mathieson with New York based Human Rights Watch. You just allowed business from three countries to finance repression in Burma for another twenty years. Where do you think that the money is going to go? Its not going to education or health programs  its going to the military to build a better command and control center to repress the population as the regime sells off the wealth of the nation.