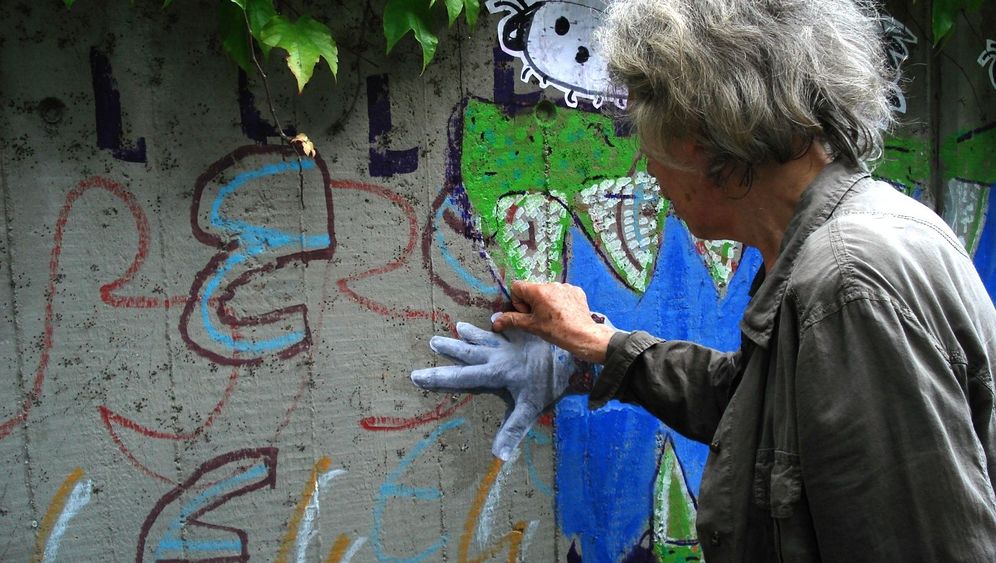 When Berthild Lorenz signed up for a creative writing class, she was puzzled by one thing: The informational flyer she had seen on the Berlin streets mentioned writing on a wall. Regardless, the 59-year-old went ahead and registered.

It wasn't until she was already sitting in the classroom that she discovered the course was teaching a different kind of creative writing -- graffiti. "When I realized that it was a course about that stuff people smear on all the buildings and walls, the first thing I thought was 'I can't stand that mess!'" Lorenz told SPIEGEL ONLINE. At first she thought of leaving the class. "But then I thought, 'I'm already here, I might as well stay.'"

Lorenz is just one of a growing number of over-50's in Germany that are learning graffiti and other forms of street art, encouraged by courses targeting older generations. Often grey-haired or bespectacled, with some participants as old as 80, they don't exactly fit the profile of rebellious youth commonly associated with graffiti culture. And for most of them, it's their first time wielding a spray can.

"Many older people regard graffiti as vandalism," says Stephanie Hanna, a Berlin-based artist who has organized several graffiti workshops for older people. "But that is changing as people start to see that it has artistic value." Indeed, in recent years graffiti and street art have enjoyed growing prestige. Works by the elusive British street artist Banksy now change hands for hundreds of thousands of pounds.

Hanna experienced that popularity first hand. When she began her "Senior Street Art" initiative in 2005, she hadn't intended it to be a long-term project. But there was such a demand for the workshops that she continued offering them up until last year.

Never Too Old for Graffiti

All across Germany, similar initiatives are encouraging the country's older generations to explore graffiti as a means of self-expression. The Mosaik Kreis, a senior citizens' activity group in the northern German city of Marl, caught the local media's attention this spring when its participants picked up spray cans for a graffiti activity day. Jutta Hinz, who co-manages the group, arranged the event after learning about a graffiti project which works to engage young people who lack interest in their studies.

"I thought if graffiti can help motivate uninterested teenagers, then maybe it can also motivate seniors," Hinz told SPIEGEL ONLINE. "It's important for them to stay active." She contacted the youth group's organizer, who visited the Mosaik Kreis for a day of spraying along with one of the young graffiti artists.

The project was a success but there were some bumps in the road, admits Hinz: "Some of the seniors were bothered by the spray paint -- they kept saying how bad it smelled."

Meanwhile, in Tübingen, street artist "Mr. Sufa," also known as Dirk Ridder, offers an annual graffiti course for "seniors." In this case, the term is used loosely -- the course is aimed at those over the ripe old age of 30. Since 2009, the 43-year-old artist, whose day job involves working with young people as a social worker, has been luring older crowds to his courses with flyers reading: "Too old for graffiti? Never!" The initiative has been such a success that he is planning another course this fall.

Spray for the Sake of Your Health

Dr. Jennifer Anders, a research assistant at the Albertinen Hospital's geriatrics clinic in Hamburg, is not surprised by the graffiti trend among older people. "The stereotype of a lonely grandmother in a pink cardigan who only plays canasta is outdated," she told SPIEGEL ONLINE. "Today's aging population came of age in a different time -- they grew up with the Rolling Stones and some are ex-hippies."

Seniors who take part in graffiti courses can benefit emotionally and physically, says Anders, though she cautions that they must also possess a certain level of fitness to start. The social setting of group courses can benefit retirees who lack daily personal contact through the workplace or those who have lost a partner, for instance. But the benefits don't end there.

Anders explains that there also physical advantages. "Graffiti is an activity that requires a lot of movement, like bending and stretching," she says. "It can also potentially strengthen hand-eye coordination."

The generational interchange promoted by many senior graffiti courses can also be beneficial, says Anders. Both Jutta Hinz and Stephanie Hanna cite a desire to bridge the generation gap as one motivation behind their senior graffiti courses. "Seniors often have this negative attitude about 'the young people these days,' while young people often feel disconnected from their elders," notes Hinz. "We wanted to facilitate communication."

Senior Graffiti on the Streets

Formal courses and workshops on senior graffiti are careful to keep their work legal, either spraying on large canvas or securing the rights to public spaces, like the walls of culture centers. But not all of Germany's seniors spray inside the legal lines.

At age 61, Walter F. -- better known by his artistic name OZ -- is renowned in Germany for the smiley faces and other signature doodles he sprays around Hamburg; some 12,000 of his works can be spotted in the city. But his indiscriminate spraying often lands him in hot water: This July, he was sentenced to 14 months in jail on 11 counts of property damage. The German press, which has followed OZ for over a decade, now affectionately refers to him as Hamburg's "Graffiti Oldie."

Unlike OZ, who has been spraying for years, most of the students participating in courses like those offered by Jutta Hinz's Mosaik Kreis or Stephanie Hanna's Senior Street Art are newcomers to the graffiti game. But some have followed in the footsteps of pros like OZ, taking what they learned in the classroom and transferring it to less-than-legal public spaces.

Hanna revealed that she sometimes sees graffiti that she taught in one of her past workshops while walking through the streets of Berlin. She told the Neue Zürcher Zeitung that apparently one or another of her students had taken to surreptitiously bringing what he or she learned in class to the city streets.

After participating in several senior graffiti workshops with Stephanie Hanna, former student Berthild Lorenz is now bringing what she learned back to the streets -- albeit legally. This time she's stepping into the role of teacher, using spray painting as a means of opening up channels of communication with younger generations.

With the help of a young volunteer, Lorenz secured the rights to paint a small rundown house by Berlin's Orankesee lake. She plans on teaching local youth basic spraying techniques and hopes to have them help paint it.

Such projects are a long way from Lorenz's own youth. She grew up in communist East Germany, where, as she explains, a hobby like graffiti was out of the question: There was an emphasis on public order, and the materials would have been difficult to obtain in any case. All that changed in 1989, she recalls. "Then the Berlin Wall came down, and suddenly everyone was spraying everything."

Her chosen hobby may be trendier than the average 59-year-old's, but Lorenz does share a common sentiment often voiced by her generation. Looking back on her own experiences growing up, she says: "I think today's youth need to take advantage of the opportunities they have."