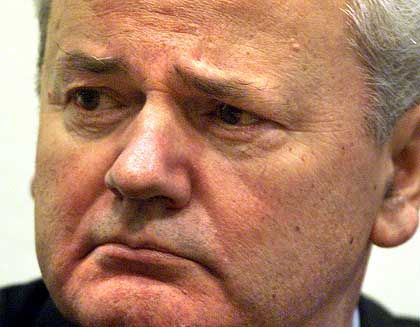 Even while on trial for war crimes, Milosevic may still be pulling the strings in Serbia.

Slobodan Milosevic, first became president of Yugoslavia in 1989, but many say his influence is still felt. Currently, he is in the Netherlands, facing charges of war crimes at The Hague. In his first six years in power, Milosevic ignited conflicts in Croatia (1991) and Bosnia (1992) during which thousands of civilians died. In 1997, he earned international disdain when he brutally repressed Kosovo's ethnic Albanian residents. In 2000, he relinquished the presidency to Vojislav Kostunia, but only under popular pressure.

In a surprising move, a Serbian court revoked international arrest warrants for former president Slobodan Milosevic's wife Mira Markovic and his son Marko. Already the Serbian people were irate that charges against Marko for allegedly harassing his father's political opponents were dropped and that financial corruption charges against Mira Markovic were dismissed. Some say the dropping of the charges was an inside deal. Is Milosovic once again ruling the nation, this time from his cell at The Hague war crimes court?

Batic: For everyone who lives in Serbia, one thing is clear: The Milosevic era has returned. Almost all of the most important posts in the nation are once again filled with Milosevic's cronies. In Milosevic's wife's case, the chief prosecutor issued "an obligatory order" to his deputy to drop the arrest warrants. Such an order is a first in our judicial history. Behind it all was a deal between Milosevic and Prime Minister Vojislav Kostunica. Kostunica remains in power thanks to the votes of the Socialist parliamentarians, whose party Milosevic once led.

SPIEGEL: Marko allegedly controlled illicit cigarette smuggling. He was arrested after he allegedly threatened an opposition member with a chainsaw. Now, the defendant has taken back the charges.

Batic: What else can the man do? His mother wrote me a letter in which her terror was clear: Marko's friend threatened him and his family day and night.

SPIEGEL: How seriously can we take the promises to track down and arrest the two most searched-for war criminals, General Ratko Mladic and Radovan Kadadzic?

Batic: Mladic is often in Serbia, mostly in Belgrade. He -- just like other war criminals -- is still being protected by the army, the church and Kostunica. And I don't just mean morally. All of those who have given themselves up as war criminals to the Hague have received up to 500,000 compensation. It's being financed by four business magnates who then are compensated by the Serbian government with lucrative deals.

SPIEGEL: The government of the assassinated Prime Minister, Zoran Djindjic which you belonged to, also knew about Mladic's trips to Belgrade. Why didn't you arrest him? 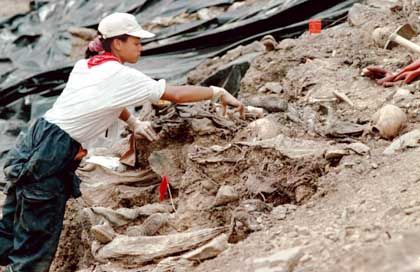 A mass grave containing the remains of Muslims killed in Kosovo.

Batic: He had the support of the army, not the government. The police could not initiate a war against the army.

SPIEGEL: Djindjic was killed in 2003 and the case against his alleged assassin is threatening to become a farce. Not long ago, the state prosecutor was replaced.

Batic That's because he would not be influenced by the government's attempts to water down the evidence. A few people holding cabinet posts today were directly involved in the killing. That's why the government is waffling on the case.

SPIEGEL: The case has focused completely on one suspect and legitimate questions about his accomplices have been totally ignored. Why?

Batic: The reasons are well known. They were people who had no political perspective under Djindjic -- a group of criminals like the ones sitting in The Hague. The plot was organized by the state and military secret service.