The International Court of Justice on Monday for the first time called the massacre of Bosnian Muslims at Srebrenica in 1995 an act of genocide, but determined that Serbia itself was not guilty of the enormous crime. 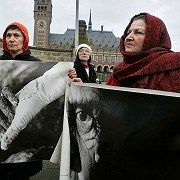 Survivors of the war in the former Yugoslavia protested against the court's verdict outside the Peace Palace in The Hague.

Nonetheless, it faulted Serbia, saying it "could and should" have prevented the genocide and, in its aftermath, should have punished the Bosnian Serbs who systematically killed close to 8,000 men and boys in July 1995.

The ruling resulted from a civil lawsuit Bosnia had brought against Serbia, the first in which one country sued another for genocide.

The 15 international judges who held nine weeks of hearings and deliberated for nearly 10 months relied in part on evidence presented in criminal cases heard by the United Nations Tribunal for the Former Yugoslavia, which has found two Bosnian Serb officers guilty of genocide for the Srebrenica massacre.

In the end, the lawsuit resolved Monday may have been the most complex case handled in the 60-year history of the World Court, which the United Nations set up to resolve legal disputes between states.

The ruling appeared to give some satisfaction - and frustration - to both sides. It freed Serbia of the stigma of being a genocidal nation and absolved it from having to pay war reparations, as demanded by Bosnia.

At the same time, Bosnia obtained what it said it wanted from the outset: a recognition of Serbia's guilt.

During the war in Bosnia, from 1992 to 1995, the United Nations declared Srebrenica a haven and promised to protect it. But in July 1995, Bosnian Serb forces overwhelmed 370 lightly armed Dutch peacekeepers, seized control of the enclave and killed almost every Bosnian Muslim man and boy captured there.

That massacre led to the ruling Monday, which also stressed that other large-scale killings and abuse of Bosnian Muslims had taken place with the financial and military support of Serbia during the 1990s war that broke up Yugoslavia.

Judge Rosalyn Higgins, the court's president, read the ruling, which described the close ties between Serbia and the Bosnian Serb forces. It said that the leaders in Belgrade, and President Slobodan Milosevic above all, "were fully aware of the deep-seated hatred which reigned between the Bosnian Serbs and the Muslims in the Srebrenica region," and that massacres were likely to occur. Yet the Serbs did nothing to avert atrocities or prevent the killings, "claiming they were powerless, which hardly tallies with their known influence" over the Bosnian Serb forces, the ruling concluded.

Serbia thereby violated the United Nations Convention on Genocide to which it is a party, the ruling found. The ruling, Judge Higgins noted, is binding and final, without appeal. Failing to arrest and hand over the Bosnian Serb military commander, Ratko Mladic, was a further violation, the court said.

The court said that other offenses committed against Bosnians might amount to war crimes and crimes against humanity, but that it had no jurisdiction over those issues. It did not list specific killings or the number of victims. International organizations say more than 100,000 people died between 1992 and 1995, two-thirds of them Bosnian Muslims.

"This is a moral victory, certainly, but less of a legal victory," said Alain Pellet, a spokesman for the Bosnian legal team. "But violations by one state against another have now been determined and many atrocities have been cited. Genocide is not the only atrocity."

After the ruling, the Serbian president, Boris Tadic, urged the Serbian Parliament to condemn the Srebrenica massacre, but that may be difficult to obtain because nationalist groups continue to deny it. He said it was "very important for Serbia and its citizens" that Serbia was not found guilty of genocide, but lamented that once again Serbia was mentioned in the context of war crimes and genocide.

In a statement after the session, Judge Higgins noted that the findings did not completely satisfy either side. "That does not mean, of course, that the court has been seeking a political compromise," she said.

All the same, the ruling, even if strictly based on the law, hews close to the political wishes of Western countries that want to pull Serbia into a wider Western European community, rather than see it isolated as a pariah state, possibly accused of genocide, with its extreme nationalists growing in strength.

NATO last year invited Serbia to join its Partnership for Peace venture and some European Union countries want to start membership talks with Belgrade, with some demanding that it first locate and hand over General Mladic, charged with genocide at the United Nations war crimes tribunal.

The court said Serbia had to abide by the Genocide Convention, requiring punishment of those accused, and urged it to do so immediately. The court's ruling might strengthen the hand of Serbians who want to rid themselves of the burden of keeping General Mladic as a fugitive in Serbia.

But the last word on the role of the Serbian leadership in the Bosnian war has not been said. Although Mr. Milosevic died last year before the end of his four-year trial, other senior Serbian political and military leaders are still facing trial at the tribunal for the former Yugoslavia.

The tribunal has part of the war-time records of the Supreme Defense Council, which included the former Yugoslavia's military and political leaders, including Mr. Milosevic. Tribunal officials have said part of the minutes of the meetings were blacked out and some whole sections were missing. But the minutes still provided much information on how the Serb leaders "ran their proxy army" in Bosnia, one tribunal official said.

Serbia made a deal with the tribunal that only its judges and lawyers could see the records, the effect of which was that they were kept out of reach of the lawsuit at the World Court. In their ruling Monday, the judges made the point that they had been prevented from seeing them.

Lawyers for Bosnia had tried to convince the court that the pattern of atrocities across many communities in Bosnia demonstrated the intention to commit genocide, not only by killing, imprisoning and deporting the population, but also by destroying evidence of their presence. Andras Riedlmayer, a historian testifying for Bosnia, said the Serb campaign to purge 26 municipalities of Bosnia of non-Serbs had destroyed or damaged 958 mosques and close to 300 Roman Catholic churches and monasteries.

But the judges ruled that demonstrating a pattern of conduct or of atrocities was "too broad" to qualify for the definition of genocide. The crime of genocide required showing convincingly there was a specific plan or the specific intention to destroy the group or part of it, they ruled.

In essence, they did not answer the question often asked in The Hague: when does ethnic cleansing become genocide?