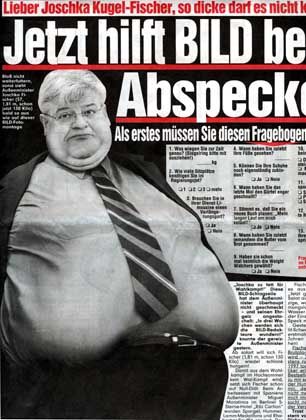 Ex-Foreign Minister Joschka Fischer was targeted by Bild for gaining a bit of weight. The photo was manipulated, of course.

Bild Zeitung, Germany's answer to the British tabloids the Sun and the Daily Mirror, serves up tripe, trash, tits and, almost as an afterthought, a healthy dose of hard news seven days a week. It serves almost 4 million readers -- including those vacationing in Mallorca, Istanbul and the Canary Islands. But unlike the National Enquirer in the US, Bild doesn't rely too heavily on stories it invents in house -- instead, it prefers to twist even the slightest news item into a world changing event threatening life as we know it. It often goes too far. In 2004, the paper -- whose motto is Bild Dir Deine Meinung (which can be loosely translated as "we form your opinion so you don't have to") was reprimanded by German press watchdog Deutscher Presserat no fewer than 12 times.

Indeed, the paper is fond of its crusades -- against the European Union, against politicians of all stripes, against foreign workers. The most recent offensive involved a number of shots fired over the bow of national soccer team trainer Jürgen Klinsmann for daring to smile after Germany lost a friendly with Italy 4-1. "Grinsi Klinsi" has since been rehabilitated, but German politicians live in terror of such treatment. When Kurt Beck recently took over the reigns of the Social Democrats, the first interview he gave was with Bild Zeitung.

Axel Springer founded Bild in 1952, took lessons from the British Daily Mirror, and watched his readership grow fat on a diet of celebrity-bashing, populism and scandal. And, of course, well-endowed, poorly clothed babes. Whereas the Mirror relegates the flesh to page three, Bild slaps them on the front page just below the fold accompanied by a short story. Tuesday's nugget: "Natasha Prepares for Spring." "Finally, the moment has come," reads the caption accompanying the photo of an improbably big-breasted blonde staring alluringly into the camera. "From now on, Natasha is only leaving the house 'with nothing underneath.' The tickle is so exciting -- right down to her little toe. It feels so light and sexy. And gets one ready for the open-air season."

And it takes a lot of news to bump the front page girl off the front page. When Angela Merkel won the chancellorship from Gerhard Schröder at the end of 2005, the Page One Girl stayed put.

The paper tends toward conservative-mindededness and during the Cold War, it took decades to admit that East Germany was a separate nation. Bild simply referred to the country as a "zone" occupied by the Soviet Union until well into the 1980s -- just in time to report on the East German government's collapse in 1989. Heinrich Böll loathed the paper, labelled it "fascist," and wove a fictional Bild into one of his novels ("The Lost Honor of Katharina Blum").

But Bild does have a few standards. It was shocked, for example -- shocked! -- when the British Sun published paparazzi photos of Chancellor Merkel's naked derriere while she changed bathing suits on vacation in Italy last week. "In any case the rear end of my chancellor is nicer for me to look at than your whiskey-bloated ass-faces in London," wrote Bild's gap-toothed commentator Franz Josef Wagner. Whether Herr Wagner would be quite so het up if she was someone else's chancellor isn't clear. "The only language you understand," he goes on, "is the language of soccer." He concludes: "We will destroy you at the World Cup."