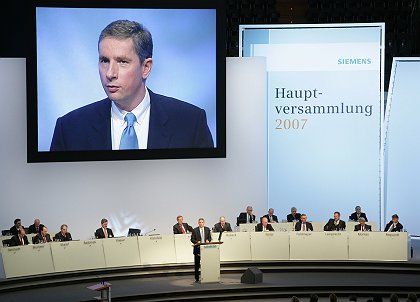 Last week did not begin well for Siemens CEO Klaus Kleinfeld, 49, and supervisory board chairman Heinrich von Pierer, 66. The chief executive and his supervisor seemed to be stumbling from one major setback to the next -- and neither had much hope of being let off the hook.

As early as last Monday, word began spreading that Pierer was looking to replace Kleinfeld should he become ensnared in the corruption scandal currently engulfing one of Germany's largest and most prestigious companies. The company stands accused of hording hundreds of millions of euros in a secret slush fund used to pay bribes in order to secure lucrative contracts. A spokesman for Kleinfeld denied the replacement rumors, but high-ranking executives have confirmed that they have been approached by company representatives and sounded out regarding their interest in the position.

On Tuesday, Chief Financial Officer Joe Kaeser -- a close confidant of Kleinfelds -- had to defend himself against allegations that he knew all about the Siemens Communications Group's secret bank accounts before other top executives were informed about the matter. A quick denial followed that accusation as well.

But then, to top it all off, the company had to wire €418 million in fines to the European Commission last week because, according to EU authorities, Siemens was a ring leader in a cartel of companies selling power station equipment -- dividing up the market among themselves. Though Siemens is planning to fight the fine, it took a huge chunk out of the company's first quarter profits.

One would have thought that the shareholders meeting last Thursday and Friday would have turned into a free-for-all. But it didn't. Instead of a day of reckoning with company management, Siemens stock price jumped by 6 percent on the cleverly timed announcement of an initial public offering for Siemens automotive unit VDO. All's well that ends well, right?

Hardly. While Pierer and Kleinfeld were confidently addressing the gathered share holders in Munich's Olympic Park, investigators from the Munich public prosecutors office were busy a few kilometers away examining a potentially threatening document that could yet rob the pair of a good night's sleep. The highly confidential document from the auditing firm KPMG bears the rather prosaic title SAS 99 Audit Procedures -- Summary of Results, but it contains highly explosive material.

In the meticulous report, completed on November 9, 2006, KPMG auditors list suspicious payments made to external consultants of the Communications unit -- payments where it is impossible to identify who received them or what services were provided. It is these payments which have led investigators to conclude that Siemens engaged in bribery on a massive scale.

In their investigation the auditors uncovered more than 20 recipients from across the globe with exotic sounding names like Hassabu For Trading & Transport or Zhang Kangming. Together, they were paid some €100 million -- a Cyprus-based dummy company called IBF Business Service Ltd. collected fully €29.4 million of the total. But what for? Nobody knows.

And when it comes to some of the payments, the real purpose may never be known. Millions were also transferred to accounts in the United Arab Emirates, Indonesia or Sudan -- countries that have proven less than willing to cooperate with German investigators.

Even juicier though is the fact that the KPMG report doesnt only list possible payments from the former fixed-line telecommunications business, which the Munich public prosecutors office has already been investigating for months. For the first time there are also clear indications that Siemens ICM mobile communications business likewise maintained suspicious consulting contracts for many years.

The report states that some €1.7 million was sent from ICM accounts to Siemenss Swiss subsidiary Intercom Telecommunications Systems between October 27, 2005 and February 24, 2006. Investigators in Bern and Munich suspect that Siemens used this subsidiary as a way to cover its bribery tracks. Indeed, investigators from the Swiss public prosecutors office raided Intercom last March -- and two months later it was quietly dissolved.

Entry number 7277 in ICMs books shows that money from the mobile communications business was also sent to China, among other places. KPMG auditors wrote that several million euros worth of old business consulting contracts were paid to companies such as Shaanxi Sanhuan, Everloyal or ICC. The KPMG document states there is a high risk that these contracts were really used for bribes. It is unclear who was responsible for the payments, some of which were made a number of years ago. Siemens, citing the ongoing investigation, has refused comment.

Three particular recipients whose names pop up in the KPMG report are likely especially intriguing for Munich investigators. Indeed, their names have cropped up on company documents as well and have also been mentioned by former Siemens executives questioned as part of the current investigation.

Moheden Al Shatta from Damascus, Syria is one of them. The KPMG report states that he was paid €9.44 million euros by Siemens for reasons unknown. Al Shatta has apparently died in the mean time. Hong Kong-based Swede Max R. is another example. A subsidiary of his British Virgin Islands-registered holding company received €4.74 million from Siemens. A few years ago, he was instrumental in helping Siemens, Deutsche Telekom and a Chinese bank win a major mobile communications contract in China.

And then there is a man from the Mediterranean Coast. This consultant received one of the largest payments on KPMGs list - more than €14 millions if the list is to be believed. But why did Siemens pay millions to such consultants all over the world? The consultant decisively rejects any accusations that he may possibly have used the Siemens funds to bribe key decision makers in foreign countries. He says he has worked for Siemens in difficult countries all over the world for 20 years. The €14 million were in fact payments for outstanding consulting contracts.

But why did Siemens pay millions to such consultants all over the world? The consultant decisively rejects any accusations that he may possibly have used the Siemens funds to bribe key decision makers in foreign countries. He says he has worked for Siemens in difficult countries all over the world for 20 years. The €14 million were in fact payments for outstanding consulting contracts. 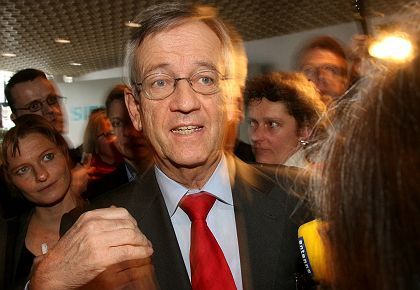 Supervisory board chairman Heinrich von Pierer may be looking for a new CEO.

Indeed, the consultant claims that his role was to smooth feathers ruffled by Siemens abroad. A few years ago in Turkey, for example, he helped arrange a meeting between an executive from Siemenss Com division and the prime ministers head of security. The meeting was supposedly held to discuss cases of possible corruption involving Siemenss Turkey office.

Another case of alleged bribery at Siemens power generation division could provide further aggravation for company executives. The case has been percolating for some time and its basic pattern is suspiciously similar to the one uncovered at the Com division.

According to the findings of the Frankfurt public prosecutors office, two former Siemens managers allegedly paid about €6 million to two executives at the Italian energy company Enel between 1999 and 2002 in order to win a gas turbine contract. In this case, some of the money was also allegedly taken from illegal accounts. In order to disguise the transaction, the funds were sent via Liechtenstein, Abu Dhabi and Dubai to bank accounts in Monaco and Lugano.

This case also concerns another high-ranking Siemens executive, Andreas Kley, the former chief financial officer of the power generation division and Siemens had hoped to resolve the matter via an out-of-court settlement or by paying a penalty. That, though, seems unlikely at the moment. The court looking into the case is currently considering going to trial. It is tentatively scheduled to start at the beginning of March.