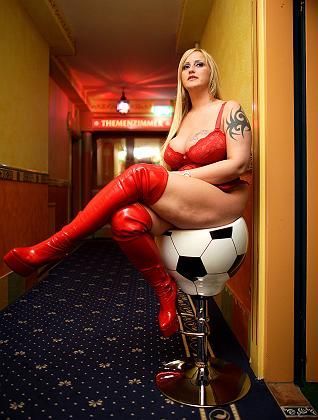 Germany's sex workers are ready for the World Cup. The government is making sure the johns are too.

Pick up an American or British newspaper these days and it seems like the World Cup isn't a football tournament at all. "Scandal of Cup Hookers," screams the headline in one British paper. "Dortmund Aims for Whore and Peace in Plans for World Cup," reads another. "United States Lawmakers Push Germany on World Cup Sex Trade," claims an American paper. You could be forgiven for thinking that visitors looking to watch a bit of soccer will be greeted by an army of skimpily clad, under-aged Ukrainian sex slaves -- sent by Madame Angie herself -- upon arrival in the country.

But even before you hit the third paragraph, the articles have unleashed the moral sledgehammer admonishing readers about the immorality of prostitution. Fully licensed brothels are discussed in the same breathless paragraph with grim estimates by human rights organizations that between 40,000 and 60,000 young women from Eastern Europe may be trafficked into Germany where they will be forced to work as sex slaves. If you're going to write about prostitution, the rule seems to go, than it had better be negative.

Forced prostitution, of course, is a very real and serious problem in Germany. But much of the foreign coverage seems to deliberately conflate the two issues.

Prostition has long been legal in Germany, but the social and legal rights of prostitutes were cemented in a 2002 law that brought the profession out of the margins and into the mainstream. Legal ladies of the night here work in licensed brothels, they have work permits, they receive regular health check-ups and they pay taxes and receive benefits. Some do in fact work in sleazy places, like the infamous bordello along the train tracks coming in to the main station in Dusseldorf where prostitutes greet delighted passengers from numbered windows. But then, the world's oldest profession has always been a bit tawdry.

Of course, there is the illegal side -- undocumented women and men who have been trafficked in from Eastern Europe, Asia or elsewhere. It's a problem that should in no way be argued away or glossed over. But the reality is that Germans here are fully aware of the problem -- so much so that former Foreign Minister Joschka Fischer was nearly driven out of office in a human-trafficking scandal. After the country loosened its visa regulations for Eastern European countries in 2000, applications from Ukraine alone more than doubled. Flooded with applications, Fischer ordered embassies and consulates to rule in favor of Eastern Europeans if there were any doubts about whether a visa could be issued. It was a loophole that suddenly meant tens of thousands of Eastern Europe prostitutes could come to Germany on tourist visas and their pimps or traffickers on "business" trips -- and it was a ruling that led one German politician to call Fischer a "pimp." The Federal Criminal Office estimates that there are 140,000 forced prostitutes in Germany.

It's an issue that criminal investigators, the government and even non-government organizations are working hard to eliminate. In the run-up to the World Cup, there has even been a national soccer-themed campaign: "Red Card to Forced Prostitution." The head of the German Football Federation also heads a program called "Final Whistle -- Stop Forced Prostitution," that was launched in March.

Both of these programs seek to raise awareness among World Cup visitors about the problem of forced prostitution and what can be done to stop it. The Final Whistle program materials say it "is not opposed to legal prostitution. In fact, existing rights for prostitutes need to be expanded in order to improve working conditions to ensure that services are voluntary and independent, and to combat social stigma."

In March, another program was launched called " Responsible Johns," with a Web site offering tips for how you can determine if a prostitute is on the books or not as well as how you can help a person if you think they are a victim of human trafficking. There's even a telephone hotline for quick help.

But at the end of the day, the vast majority of the country's sex workers -- 400,000 of them -- are legal. And when the World Cup begins, they'll be in the well-regulated brothels and in mobile huts stationed near football stadiums waiting for customers. Visiting them isn't a sin. And the German economy could use the boost.