The first issue of DER SPIEGEL appeared on Saturday, Jan. 4, 1947, in Hanover, Germany, as the successor of a magazine called Diese Woche or "This Week." The original magazine was modelled on American and British newsmagazines and had been conceived by members of the British military government shortly after World War II as an outlet to at long last provide the German people with "objective news" once again.

A handful of young German journalists led by Rudolf Augstein took this call for critical journalism literally, and didn't spare the Allies either. The government in London protested fiercely against this form of "enlightenment," as did the three other Allied powers. After just five issues, the British rid themselves of the troublesome paper by handing Diese Woche over to the Germans.

Rudolf Augstein, to whom they granted the publisher's licence, renamed the magazine DER SPIEGEL ("The Mirror") and became its editor-in-chief and publisher. The first issue appeared in January of 1947.

At that time, the magazine cost one Reichsmark; though it sold for up to 15 on the black market because the paper allocation was barely sufficient for 15,000 copies and these were always quickly sold out. By 1952, when DER SPIEGEL moved from Hanover to Hamburg, the net paid circulation had risen to over 121,000 copies.

DER SPIEGEL gained wide fame in 1950 when it claimed that Bonn had only been chosen as the provisional capital of West Germany because members of parliament had been bribed. As a result, the German Bundestag set up the so-called "SPIEGEL Committee," which tried in vain to shed light on these assertions.

The "SPIEGEL affair" of 1962 was probably the most important event in the magazine's history, and an important test for democracy in the young Federal Republic of Germany. One night in October, the police occupied SPIEGEL's news and publishing offices, accusing the magazine of treason -- "systematically, for its own financial gain" as then Chancellor Konrad Adenauer was to declare before parliament -- for publishing a cover story entitled "Limited Readiness for Defense." The story was about a NATO exercise called "Fallex" during which it became apparent that the German military, the Bundeswehr, was in a sorry state. Authorities arrested Augstein as well as the magazine's editors-in-chief and several journalists. Augstein remained in jail for 103 days.

A wave of protest swept across the country and it ultimately became apparent that Defense Minister Franz Josef Strauss had lied about his role in the affair, leading to his resignation.

To this day, DER SPIEGEL continues to expose scandal and impropriety with far-reaching consequences in the world of politics and business. Over the past year, SPIEGEL published a series of investigative reports as part of a publishing partnership with the Guardian, the New York Times and El Pais covering documents provided by the Internet whistleblowing platform WikiLeaks, including the widely publicized Afghanistan and Iraq files as well as the US diplomatic cables. The magazine has reported extensively on the European debt and euro crisis. It also drew critical praise for its feature "The Kill Team" covering the excesses of a group of American soldiers in Afghanistan.

In Germany, DER SPIEGEL is rightly regarded as being synonymous with "investigative journalism." It is characterized by thorough research and dependable quality. In many cases four, five or even more journalists and correspondents work together on a single story. The journalists concentrate primarily on events of political and social interest. The result is a magazine which offers a lot of background information, a balanced mixture of short and long articles, by-lined commentaries, major reports, forums for dialogue and discussion and an in-depth examination of the issue's cover topic.

The SPIEGEL archives contain more than 50 million text documents and 5 million pictures, in electronic form, on microfilm and on paper. Over 300 publications in 15 languages are regularly scrutinized. This puts the SPIEGEL archives among the largest media archives in the world.

The news desks and departments of all the SPIEGEL Group's products are supported by more than 70 highly specialized researchers who assist them in their investigations within the SPIEGEL archives, the Internet and information databases all around the world.

In addition to this research, the main task of the experts in the archives is "fact checking," or verification. They check journalistic texts for plausibility and verify all the facts such as names, dates and quotations. The same holds for pictures and information graphics. Articles that have been checked in this way, and where necessary corrected, ensure the high quality of DER SPIEGEL's journalism.

The photo archives have evolved historically and now cover more than 50 years of international political events. What started in 1947 as a simple box of photographs for the first edition of DER SPIEGEL has grown into a comprehensive analogue image archive. Since the beginning of 2000, most new images have been stored digitally. Picture editors can access these images directly and copy them digitally into their layouts.

Some 6 million Germans read DER SPIEGEL each week, representing 9 percent of the population aged 14 or above. For those interested in current affairs, politics, economics and culture, it is considered required reading in Germany. The magazine has over 470,000 subscribers, a number which continues to rise. On average, readers tend to spend two hours with each issue. 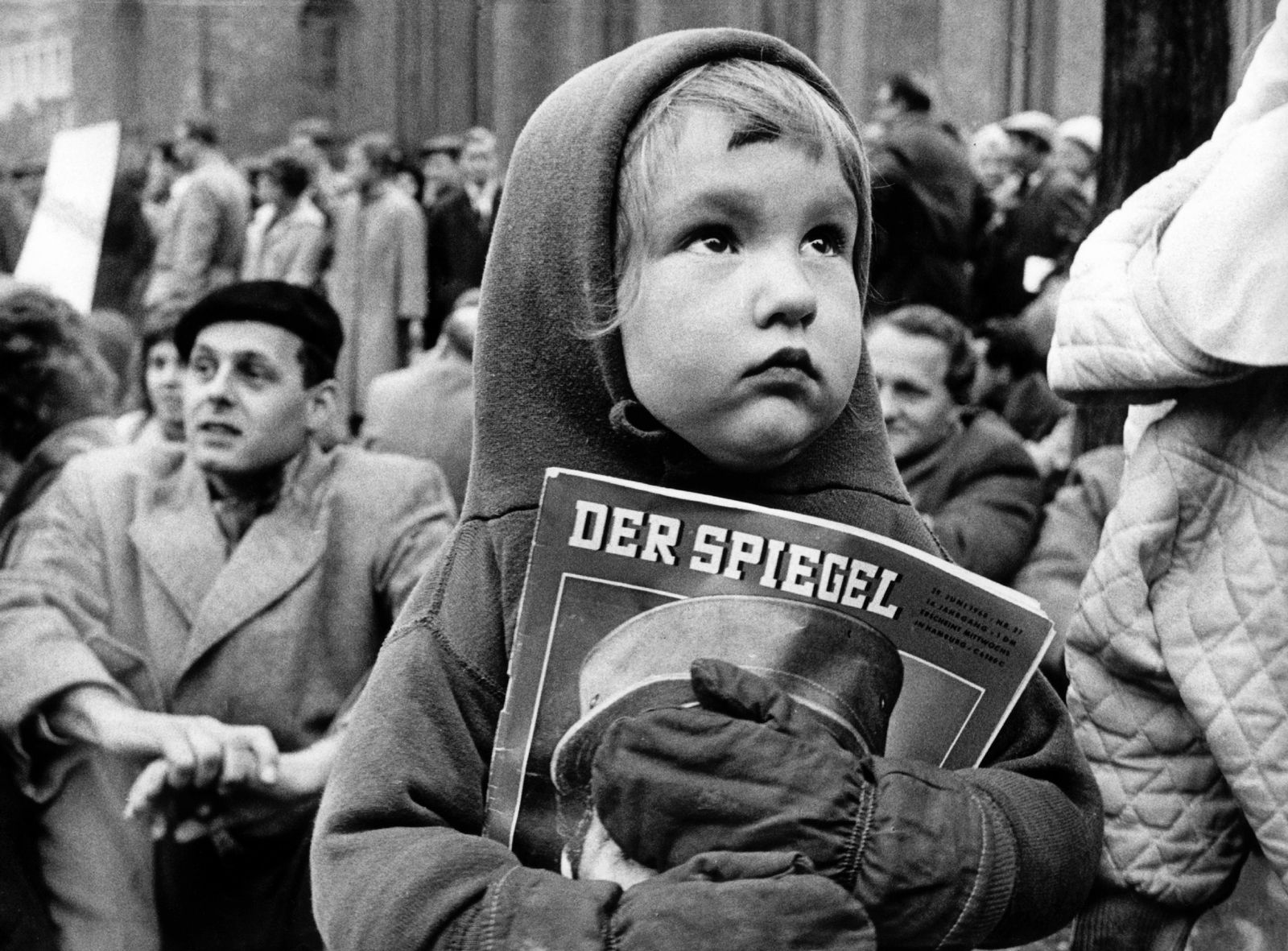 Protesters in this archive photo from 1962 demonstrate against the arrest of SPIEGEL editors. A cover story critical of the poor state of the German military led to arrests and a major debate over press freedoms in Germany.